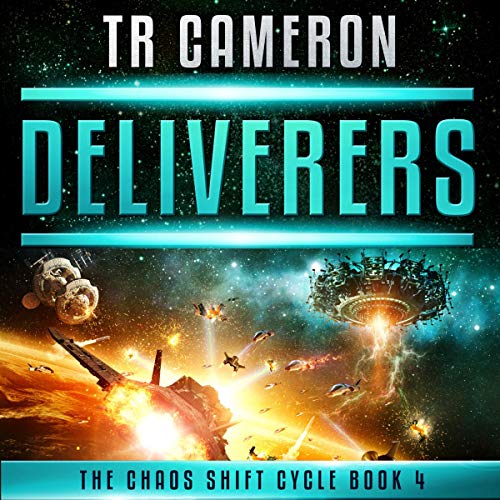 Humanity’s fleet is shattered. Kate Flynn and her crew have vanished. And Earth is in the crosshairs.

Commander Anderson Cross can only watch as Kate departs to find something - anything - that can stem the tide of the Xroeshyn holy war before it reaches Earth.

His own ship is held together by hasty repairs and good thoughts. He imagines this is the worst moment of the entire war. He has never been more wrong.

The aliens are ready to strike at the soft underbelly of the human fleet. The aliens have found the way to Earth.

It will take all that Cross and his crew can give to delay the enemy in hopes of Kate’s arrival.

There’s just one last chance to save humanity. If they fail, Cross, Kate, their crews, their friends, and their entire species will be done for.

Can humanity resist the overwhelming might of the alien invasion into their own solar system? There's only one way to find out.

Buy Deliverers today to experience what could be Earth’s last moments!

What listeners say about Deliverers

More of the good stuff

Starship Troopers meets Halo continues unabated and it's better than ever. Features a lot more space combat than the last book and some new toys for the gang. Hits all the plot points you would expect at this point in satisfying ways, can't wait for the conclusion.