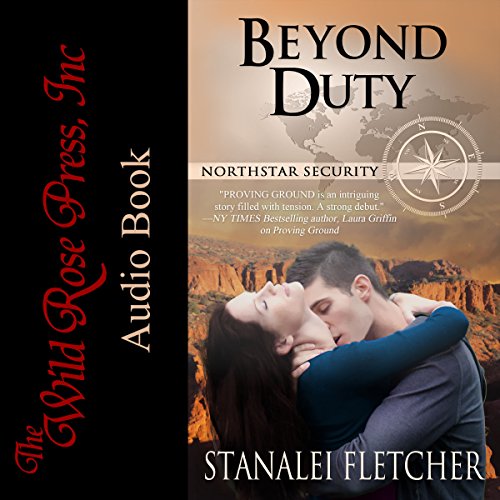 By: Stanalei Fletcher
Narrated by: Charles Henderson Norman
Try for £0.00

Northstar Security agent Riley O’Neal balks at posing as anyone’s husband for an assignment. Nevertheless, to rescue the kidnapped wife of a US senator, he’ll perform his duty and do his best to resist the charms of the very woman who deceived him on a previous mission.

US Army Lt. Mary “Chip” Anderson is uneasy about the undercover assignment to pose as newlyweds. Concealing her attraction to Riley while staying focused on the task may be the biggest challenge. Despite efforts to remain objective, enforced proximity ignites emotions and a desire to make the fake honeymoon real.

When Chip is kidnapped during a botched rescue attempt of the senator's wife, both women become pawns in the case that threatens the nation’s security. Riley must remain objective, save the women, and avert the threat. But after that, can he convince Chip that she wants to wear his ring forever?

What listeners say about Beyond Duty

Chip and Riley's story is a lot of fun to listen to. Maybe "fun" isn't the right word because this story features teenage girls being taken advantage of, drugs, kidnappings and extortion. Aside from that the story is full of chemistry that appears to be a slow simmering seduction.

The two main characters meet when both are in disguise trying to close down an operation that takes advantage of runaway girls. They meet again quite some time later as themselves when they are thrown into a partnership to retrieve the kidnapped wife of a senator. The time inbetween left them curiously wondering about each other. And thus the foreplay begins. Of course it isn't all about sexual tension. The two repeatedly find themselves in dodgy situations as they attempt to retrieve the kidnapped woman and save the day.

As for the narrative performance, I think Charles Henderson Norman does a stellar job for the men in the story. He has a wonderful deep voice that is quite appropriate for the Alpha men in this book. He just doesn't quite work for the women though.

Overall I enjoyed the fast paced nature of this book. It was easy to listen to and quite entertaining.

This story could have been more developed to reach its full potential.It had promise but for me began to become tedious.

The characters needed to be more fully developed and the plot requires more nuance.

The Narrator is capable but did not help me enter the story.

I liked this book. This story started out slow at first but kept me engaged once I got into it. The narration could have been better but didn't ruin the story for me. This was my first book by this author and I would have no problems listening to the other books in this series. I was given this free review copy audiobook at my request and have voluntarily left this review.

Perfect blend of action, humor, and romance. Great characters and story, I was hooked from start to finish following Chip and Riley’s story. Great narrator too, he puts emotion into his performance and has kept the voices he uses for the characters consistent through the series so far. I received a free review copy of this audiobook at my request and I have voluntarily left this review.

This is book 3 of the series. This was fantastic like book 2 was. Loved how there is mystery . Special forces and intel in this one also
Hero is Riley who you meet in book 2 . Heroine is Mary . Her nickname is Chip . Mary is in the Army. Riley is in the Special security team
Both of the hero’s Riley and Mary have to go undercover to save a senator wife . Both have to pretend they are married .
Sparks fly between them . They both are attracted to each other. But Mary has a problem. She’s hardheaded and stubborn.
Do they find the culprit
Grab it and find out

The narrator was good. He knew how to do all the voices perfectly

The third installment of the Northstar series took me a little time to get into, but once in, the story took off! Riley and Chip's are called to pose as a married couple so they can save the wife of a senator. Kidnapped and being held ransom over a congressional vote, this case is dangerous. Pretending to be married after a tumultuous first meeting seemed like it would be difficult, but the chemistry is there, and the sparks are flying. As the case goes on, and things take a serious turn, these two have to separate their feelings from the case, but is that possible? I love romantic suspense and Stanalei Fletcher again delivers a story with thrilling scenes. The banter between Riley and Chip is full of spunk and while there is attraction, the respect for their craft is evident and comes first. The story is filled with suspense and I love their undercover story, it adds a lot to the plot.

Narrated by Charles Henderson Norman, his voice has become this series for me. He gives the character the suspenseful sound, and can turn and fill each with a loving voice. I look forward to the next in the series.

I am enjoying Stanalei Fletcher’s ‘Northstar Security Series’. I especially enjoyed Book 2 with Kellee O’Neal and Eagan. Kellee is Jack O’Neal’s daughter and Northstar was his brainchild. This third book’s hero is Riley O’Neal, Kellee’s brother.

Quickly, before I begin the full review, I want to say that I find Charles Henderson Norman’s voice very deep and while that works for the men in the series, it isn’t quite as good for the women and although I know he was doing his best, his eight-year-old boy’s voice didn’t work. Although his Russian accent in Book 2 was good, his Spanish accent in this book one didn’t work as well for me.

That being said, I did enjoy the book. US Army Lt. Mary “Chip” Anderson (whose nickname comes from ‘chip off the old block’) is in the military and is a strong woman – emotionally and physically. So her whining irritated me. But when the rubber hits the road, as they say, she is up for the task. Her martial arts training proves critical and she is willing to take risks – even putting herself in peril. Her reasons for helping people is heartbreaking and moving. Dedicating herself to finding and rescuing the lost is admirable and laudable.

That being said, Riley’s reaction that if he can’t be perfect then he shouldn’t try was a little much. He says to Mary, “You don’t need me. You don’t need anyone.”

Well, darn tooting she doesn’t. I love women who can take care of themselves. That means when she does choose to get into a relationship, she is doing so as a partner, not a dependent.

“She was in her Class A uniform and her cap was gone and her braid hung over her shoulder in disarray. His mouth went dry. He wasn’t prepared to face her. He didn’t think he’d ever be prepared to face her. She looked at him with expectant eyes as he stood in the doorway. She was so exquisite in her own way his chest hurt at the sight of her. He wanted to rush to her and kiss her soft mouth, drink from her lips until he was numb with intoxication.”

This is a good action book with lots of action and a fun underlying romance.

This is the third book of the series, and love the character Mary "Chip" and her chip on the shoulder attitude with Riley. Although this book was a little different than book 2, it was still good-just a different kind of good.

I do have to say, I get a little bit of a chuckle to myself with the narrator Charles Henderson Norman (who has narrated each of the books in the series) does the women's voice...hee hee....maybe that is just me. Good job! Looking forward to listening to the next book of the series

Riveting Story of espionage and romance

This is the second audio book I’ve enjoyed from Stanalei Fletcher and narrator Charles Henderson Norman. The narrator brings Stanalei’s characters to life and the settings are explained in great detail. I like the feeling of being in the story rather than just reading it.
Riley O’Neal objects posing as anyone’s husband and especially when it’s the very woman who deceived him on a previous mission. US Army Lt. Mary "Chip" Anderson tries to remain objective during the undercover mission. When things go wrong and Chip is kidnapped while trying to rescue a senator’s wife who also happens to be her friend, it’s up to Riley to save the women and avert the threat. The twists and turns keep you guessing until the very end.
I enjoy fast-paced romances with suspense and intrigue. Beyond Duty met all my requirements and then some. I truly enjoyed this book and highly recommend it.

This was a good book and interesting story. The narrator was hard to listen to when he did the female voices but if you can get past that, the twists and turns will keep you interested.