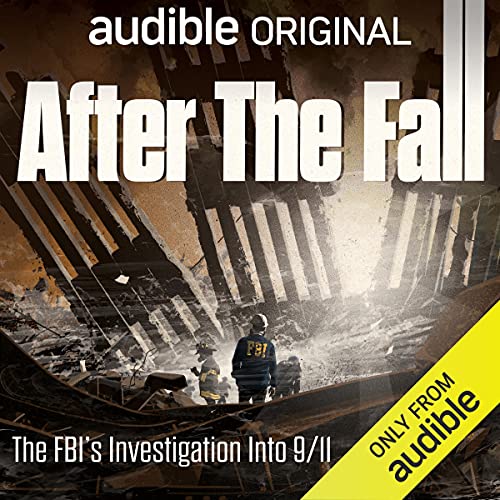 By: Peter McDonnell,Bobby Chacon
Narrated by: Dion Graham
Try for £0.00

What listeners say about After the Fall

Superb, gripping and sad, wish it were fiction.

Prepare to surrender hours to this, you will
Be right there, chasing the evidence , reliving the fateful day, Afghanistan and beyond .so pertinent in today’s times, wondering what will be next?

The detail this goes into is remarkable.
like many others I saw the second plane hit live on TV. It was a sickening moment that I'll never forget.
The diligence and dogged determination of the FBI Agents, often in the face of obfuscation from the CIA and others, is testament to their desire to try to get justice for those murdered on 9/11.
Well worth a read.

the truth is hidden in the documents at the White House. Afghanistan was raped. they never did it. Bush and his cronies know the truth, so many usa citizens died as well waste of many lives in Afghanistan's. why blame the desert people

This fills in a lot of blanks from what we knew at the time. Very informative podcast.

enjoyed the entire series of the podcast it was absolutely
exceptional. incredibly interesting and a lot of information I had never heard before from people who lived it.

Can't recommend this highly enough. A thought provoking and very gripping production. Definitely worth the time to listen to it.

I was very moved by the struggles of the agents involved. The difficulties they had getting intel from the CIA was unacceptable.

Scary to think that the tragedy of 9/11 could have possibly been prevented.

I recommend this podcast highly.

Well put together review - lots to think about.
Binged on the program.
Well balanced and wide ranging. Highly recommended.

Thought this was great! And loved the narration. A must listen for anyone interested in 9/11 and the background to the attacks.

Well worth my time regardless of already being generally familiar with much (but certainly not all) of what is presented here, and in first person. Informative, constructive and just very well done all-around. Thank you.

We started listening to this and didn’t want to stop. It was fascinating to hear about 9/11 from this perspective. Highly recommend!

I as usual really enjoyed this podcast. Enough detail to keep me interested, new voices, flow was great. Highly recommend it.

Enjoyed listening to this fascinating story of what the FBI did not just on 9-11, but what was going on prior to and after the event. i a. proud of them for sticking to their ideals and going at this with intent of prosecuting those behind the attack. Who knows how many lives might have been saved if not for the presidents determination to invade Iraq instead of sticking to the actual goal of getting Bin Laden & those responsible.

As someone alive during the attacks but not old enough to have comprehended everything, this was an amazing deep dive into the investigation. It does a great job of laying out specific facts and perspectives. I hope people listen to it not only to remember and memorialize 9/11, but also to better understand the values and inner workings of our own government in a time of crisis.

I absolutely loved this and thanks for sharing this story. I never thought of how much time and effort, at such a fast pace, was put into this investigation. It was truly amazing to hear how all the pieces were put together.

Engrossing, emotional, not to be missed

I could not stop listening. Not a big law enforcement fan, this podcast changed my thinking.

This was an amazing narrative that offers the most complete picture of the 9/11 investigation to date. Hearing the stories of those who responded to Ground Zero, the Pentagon, and Shanksville in their own words was profoundly moving. I have a greater understanding of 9/11 in the larger context of history and how policies at the FBI and the CIA changed as a result. This is a must-listen for anyone who wants the full story on the 9/11 attacks from people who were knee deep in it.

As I listened to this podcast, I found myself feeling very angry that just better communication could have maybe prevented the horrible loss of life on 911. Frustrating to here that CIA withheld information. I commend the agents that shared the truth with us. Thank you and keep doing the right thing. Your work is so very important.

This series was one of the the most important things I've listened to to date. Right from the beginning, you are briefed on what you will hear over the course of 16 episodes, the story told through the perspective of the FBI agents involved in the 9/11 investigation. Our traditional perspective over the last 20 years has been widely political and military involvement minded when we think about those attacks in 2001. This instead, truly shines a light on the direct impact we saw within the country (not the various media outlets). Re-living the audio was emotional and real as if it was happening right now as you listen, Dion's performance, was exceptional.

In summary, I have grown an even more tremendous respect for the FBI, what they stand for, and most importantly of all, being able to hear the names and learn the personal stories of the individuals who make the FBI as great as it is then and still today. It was a thought provoking journey I will share with many, and never forget. Thank you Peter McDonnell and Bobby Chacon. Thank you very much for bringing this to life for all us listeners.