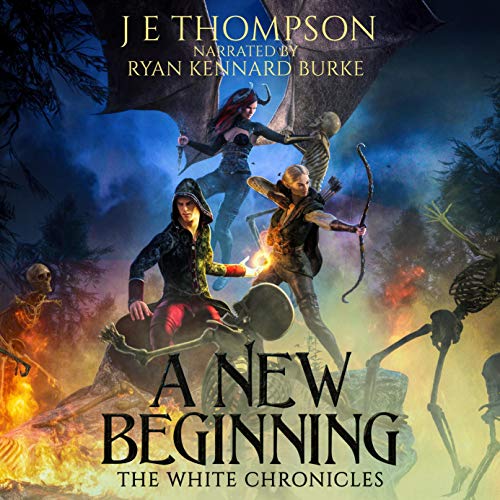 A New Beginning: A Fantasy Adventure

Vexx White is a down on his luck apprentice mage, recently expelled from Fallanden Magical Academy for experimenting with necromancy. With nothing to lose, he becomes a dungeoneer for hire — taking odd jobs in his home town of Cloudbury for pocket change. Nine out of 10 dungeoneers die in their first 10 quests, and to survive Vexx finds himself teaming up with a clumsy elf and a crazed succubus. When they’re not busy trying to kill each other, the dungeoneers drum up all the work they can get, from raiding dungeons to hunting down thieves.

Vexx’s adventures take him from the seedier parts of Cloudbury to the goblin-infested Lifeless Hills in search of gold and glory. But if he wants to live up to his hero, the legendary dungeoneer Dred Wyrm, what other choice is there?

A New Beginning is the first book in The White Chronicles series, a humorous fantasy sword and sorcery adventure that will be followed by the sequel The Shattered Seagull in July 2020.

What listeners say about A New Beginning: A Fantasy Adventure

What did I like: I enjoyed the underdog story of Vexx White, the comedy and sarcasm.

What did I dislike: the blatant misogyny with the two female leads.

The reason for my rating: I was amused by the story and D&D references but the representation of women turned me off completely.

Narration was done well. story did grab me. levels where implied but not litrpg. Boom.

The story made me cringe at moments with the over sexualizing the main character's party members. I get that is what they were going for it just isn't for me. It has potential that type of stuff loses me after a bit and it was brought up often enough with where he wasn't trying to look etc. I finished it in a few days and I won't say I hated it I just won't be continuing this adventure.

It was a decent book.

The story was more a story with minor to little LitRPG "settings." I was expecting more, and so I am a bit let down because of it. On the other hand, without preconceived notions, it was a good book. It made me laugh, roll me eyes and even cheer for the group. You know there is going to be a book two. But there is barely a hint of what is to come other than, the characters are labeling themselves adventurers for hire. They are just surviving by the seed of their pants and doing a decent job of it lol. They definitely have that "motley" crew thing going for them lol.