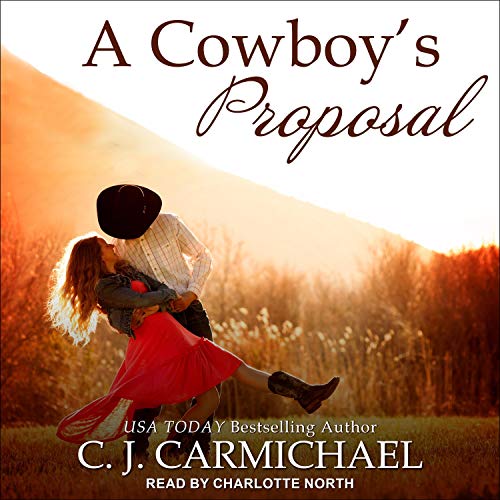 By: C.J. Carmichael
Narrated by: Charlotte North
Try for £0.00

She's not willing to forgive. He's unable to forget.

One year ago, Montana cowboy Dylan McLean left the love of his life at the altar and fled town, thinking he was doing the right thing by saving her from a scandal. He's found success on the rodeo circuit, but his love for Cathleen never faded. Now he's returned home to clear his name, claim his bride, and rebuild his legacy.

Bed-and-breakfast owner Cathleen Shannon has moved on from her broken heart. That is, until Dylan shows up at her house one night asking for help and a second chance. Despite Dylan's betrayal, she promises to assist with his investigation. She doesn't want an innocent man to go to jail, but her heart is most definitely off limits.

But Cathleen has forgotten one important fact: Dylan is relentless when he's going after something he wants. He walked away once, but she won't let that happen again.

What listeners say about A Cowboy's Proposal