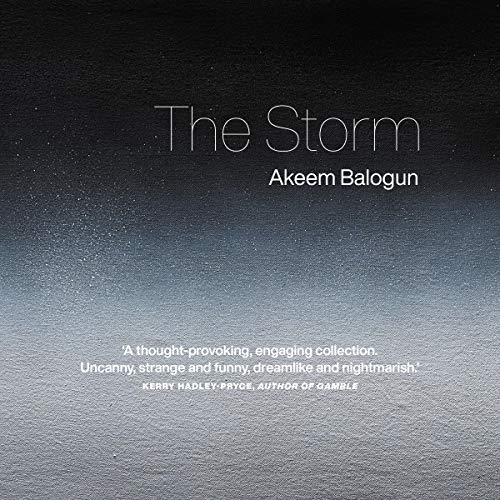 By: Akeem Balogun
Narrated by: Rider Shafique
Try for £0.00

Through 13 remarkably different stories, The Storm uses the intimacy of an evocative and volatile landscape to explore the very basics of human survival, narrated by the phenomenal dub MC and poet, Rider Shafique (Young Echo, Deep Medi) and complemented with the balmy, musical textures of Wodwo.

In "Eden", a sister longing for her brother goes to extremes to be reunited with her deceased sibling.

In "Bonfire Hero", a doubtful and tired vigilante watches the streets beneath him deteriorate.

In "Buddhatarium", personifications of tranquillity can be bought and exploited, becoming the only way for a father to keep his family together.

The Storm audiobook is unlike any other; Balogun's debut collection is given a new dimension via unique performances of voice and sound, taking listeners into the world that the stories inhabit, where extraordinary characters deal with extreme crisis.

The Storm was originally published by Okapi Books, and its audiobook is mixed and mastered by Shivan Mistry.

Music by Wodwo is licensed under a creative commons license.

What listeners say about The Storm