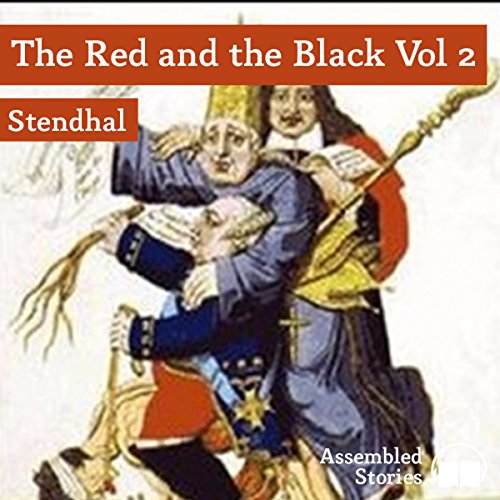 The Red and the Black, Volume 2

The Red and the Black, Volume 2

The author dedicates his story to 'The Happy Few'. This presumably means those who lead lives free of hypocrisy and deceit. They are few indeed in the second part of this authoritative novel of early 19th-century France.

Julien Sorel leaves the country town of Verrieres and flees to Paris with the sound of guns in pursuit. He is to take up a post as secretary to M. de la Mole, an influential businessman in the capital. Peasant though he may be, Julien is a man of ideas, and in the drawing rooms of Paris in 1830, gripped by the fear of a second revolution, anyone with intellect is treated with disdain.

However, Mathilde, the daughter of the house, has a reverence for past days of glory and honour and, although repulsed by his low status, sees in Julien a chance to break away from her boring suitors and the staleness of her social life. She seduces and rejects him twice before Julien learns the ways of polite society and convinces her of his merit: she becomes infatuated and soon expects his child.

When her father is informed, he requires reassurance that Julien is not just an ambitious social climber who exploits women for the benefit of his career, so he writes to Madame de Renal, with whom Julien had a passionate love affair. The young secretary learns of the nature of her reply, and his following action results in a trial which could end in one of three ways: his freedom to live with Mademoiselle de la Mole, to run away with Madame de Renal or death by guillotine. But while in prison, the young cleric finds the truth of his beliefs and convictions, and he's not prepared to compromise!