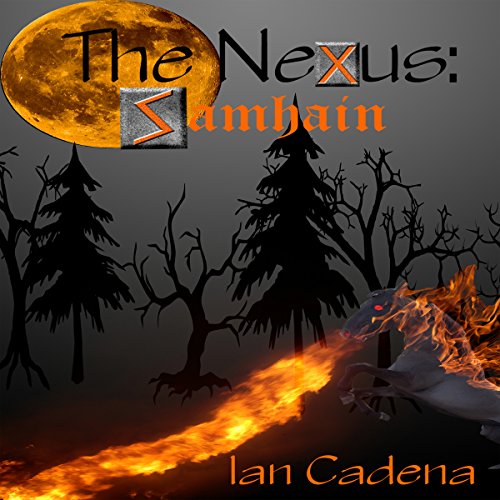 The Nexus is the realm between death and the after-life and has been sealed for centuries. Max Dane, an 11-year-old boy turning 12 on Halloween, may be the only key to opening it.... But should it be opened?

This book series is set within a year span of Max's arrival to Ravencrest, Vermont where the paranormal is the norm. Max has epileptic seizures that cause hallucinations, but his new friends try to convince him he's having psychic visions via the Nexus. Max's visions keep taking him back to Samhain during the middle ages where he meets a tortured soul in the form of an eight-year-old boy named Jack. Max decides he's going to help release Jack from his torment even if it costs him his own sanity. His only chance at doing that is to traverse the Nexus and brave a fierce entity known as the Knightmare. And to traverse the Nexus he must explore mystical and spiritual practices like drumming, meditation and tarot, which launch him not only through the Nexus but on a journey of self-discovery that he may regret.

A pleasure to read.

This is a great, well written and very entertaining book. It grabs your attention right away and has unexpected twists and turns throughout which work well in progressing the story. It's apparent how much time & attention went into this book. The author has done a very good job in looking at the history behind modern traditions in a way that was very entertaining.

Max. Who at nearly 12 might seem a little young to take on the burden of being such a pivotal character. He isn't. He's entertaining and engaging.

Which character – as performed by Ian Cadena – was your favourite?

Max. Great narration all round but this character gets a lot of air time and this is great.

The Author brings us into a world where spiritual beliefs of folklore, myth and ancient culture become every day facts. From page one you feel an urgency that builds and twists to the end. Well developed characters sweep us along in this clever and interesting story.

I was always on my edge of my seat . I felt sorry for Jack and Mac, they went through so many different chances and the feelings of loss. This book is something I found so intriguing with witches , American Indians, the all the characters from the past mixed in together. This is one audio book that I will be listening to again and again because there is so much to found out about. The narrator and the author are the and he did a AWESOME job.

Fantastic material for a book

I enjoyed this book immensely. I am looking forward to the rest of the story. Read this and you won't be disappointed

What made the experience of listening to The Nexus: Samhain the most enjoyable?

I really enjoyed the parts of the book containing Max's visions - the history and backstory were very good. The native American culture parts were also very interesting

The way it ended with Max in a straight jacket

This audiobook was provided by the author, narrator, or publisher at no cost in exchange for an unbiased review courtesy of Audiobook Boom

Loved it. great storyline. light on character development but it still all fit together really well. the ending was a shocker...

What made the experience of listening to The Nexus: Samhain the most enjoyable?

I always enjoy clever ways of interpreting ancient history/mythology and this book does that.

What was one of the most memorable moments of The Nexus: Samhain?

Good use of time travel/shifts to progress the narrative.

I enjoyed the book for the most part but felt some of the actions were more reminiscent of of what mid 20's hipsters are engaged in rather than 12 year old kids, but hey kids these days, right...

An Exciting and Thought-Provoking Journey

Would you consider the audio edition of The Nexus: Samhain to be better than the print version?

The audio edition of The Nexus: Samhain is narrated by the author and therefore sets the tone accurately. The book introduced me to some concepts that were new to me; so I appreciated being led through the journey by the author himself.

Max carries the wisdom of an older soul and with the burden(s) of such. His optimism, curiosity, and energy were inspiring and infectious.

When Max is introduced to Jack, the reader recognizes the forces that connect them. The idea of finding a purpose for your life is something that resonated with me. I found that the flaws and limitations of the protagonist are what motivated him and in fact may ultimately have benefited him.

The author obviously appreciates Halloween as much as I do, maybe even more so. But instead of simply using the obvious appeal of the mystery and evil that lurks behind the last night of October, the reader is exposed to some history and concepts that broadened my understanding of and appreciation for more complicated elements.

Very impressive work from this new author. Can't wait for the next chapters/new seasons.

if you like the paranormal along with mystery and suspense this book is for you. From start to finish the story line keeps unfolding keeping the reader ever entranced. by the end of the book you can't wait for the next one in the series excellent reading I can't wait to see more from this author

are intriguing ideas in the novel

Max is a deeply troubled 11 year-old.  His parents are in the middle of nasty divorce and it’s his fault.   He knows this, because his mother keeps reminding him.  Max also knows things about people whether they tell him or not, plus he sees ghosts, witches, and visits the dead.  Add to this a new school, an angry bully, a local murder, and a lot of confused adults and Max is clearly over his head.

Samhain (pronounced sow-win) is a Gaelic festival celebrating the end of harvest season and the beginning of winter.  It coincides with Halloween and Day of the Dead, a time where the veil between life and death is thinnest, and if one knows the proper rituals, can traverse these worlds.  Max has unwitting crossed over and discovered a tortured soul, a young boy whose head was severed in a magical ritual and cannot rest until his tormentor is brought to justice.

Another plot weaves through Max’s time as the listener is brought back to an ancient age of knights, sorcery and a headless horseman of incredible power.  In Max’s own time, there is also an unsolved murder, a small town power struggle, an abusive swim coach, an untrustworthy psychologist, incompetent FBI agents, Halloween loving Native Americans, Knights who don’t know what a crucifix is, and much more.

There are enough plots and subplots to keep the listener guessing (and possibly confused) throughout the story.  Characters come in and out of the story, from the different times and subplots, and can be quite difficult to follow.  Perhaps this would be different if reading the story rather than listening to it as an audiobook.

The story is read by the author.  He has a pleasant enough voice, but reads in a staccato fashion which is highly distracting.  Many of his character voices are inconsistent and his accents don’t match what is told to the listener in the story (French, English, Native American, etc.).

The Nexus: Samhain, because of its young main character should probably be considered a young adult novel, but the intense homosexual innuendos, borderline graphic rape/sex scenes and pedophilia references might narrow that audience.  Though there are intriguing ideas in the novel, humorous interludes, and courageous explorations of prepubescent sexual ideas, the confusing interwoven plots and distracting narration make it difficult to recommend.  At the end of the novel, the listener is left without any resolution to the story.  This is the first volume in a series of unknown length and as of this writing, an audio sequel is not available.

This book was entertaining to say the least. I really enjoyed the parts of the book containing Max's visions - the history and backstory were very good. The native American culture parts were also very interesting. The Salem-esque feel of the town and the setting of Halloween helped add intrigue to the story.

Note: for the first few minutes and for brief periods a couple of times in the narration, I could hear an awkward style to the narrator's vocal patterns. I almost didn't listen past the first little bit because it distracted me. It got better as it went on and I didn't notice it after a while.

Also, I did feel like some of the sections revolving around the other teens that Max goes to school with seemed a little odd and unnecessary to the story. I have no issues with homosexuality but for this 11-year-old boy in a small town being exposed to sex acts in a locker room and constantly staring and describing bulges and naked body parts was a bit over the top. Yes - I'm sure it does happen, however not that often and it wasn't important to the plot.


***This audiobook was provided by the author, narrator, or publisher at no cost in exchange for an unbiased review courtesy of Audiobook Blast.

What would have made The Nexus: Samhain better?

Making the child not be such as a-hole.

What was most disappointing about Ian Cadena’s story?

The main character is terrible. He's selfish and self-centered. Sure we were all teenagers, but this is absolutely over the top. I stopped listening after the first couple chapters.

If you could play editor, what scene or scenes would you have cut from The Nexus: Samhain?

I received this book free of charge in exchange for a review.
I'm sure someone will like this book, it's just not for me. Please see the other reviews and make your own decision. Don't let only my words affect your choice.