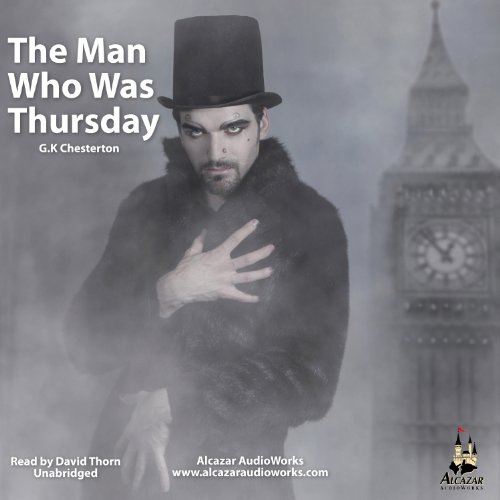 The Man Who Was Thursday

Chesterton leads us on a merry ride of mystery, intrigue and above all, fantasy in this tale of anarchism filled with suspense and sitting-on-the-edge-of-ones-chair fright. Sometimes it is referred to as a metaphysical-thriller and Chesterton himself refers to it as "a nightmare". We are kept wondering and in suspense until the very end of this masterpiece by the creator of Father Brown.

Chapter 02: The Secret of Gabriel Syme

Chapter 03: The Man Who Was Thursday

Chapter 04: The Tale of a Detective

Chapter 05: The Feast of Fear

Chapter 09: The Man in Spectacles

Chapter 11: The Criminals Chase the Police

Chapter 12: The Earth in Anarchy

Chapter 13: The Pursuit of the President

Gilbert Keith Chesterton (1874–1936) was a British novelist, journalist and poet. Most famed for his fantasy and mystery novels, Chesterson was a contemporary of Oscar Wilde and George Bernard Shaw.

Referred to as The Eccentric Prince of Paradox "truth standing on its head to gain attention.", Chesterton used wit, humor and satire to make social commentary.

What listeners say about The Man Who Was Thursday

I’m not sure what you would have to do to ruin this wonderful allegorical masterpiece. This version has a good reader and is a wonderful book!