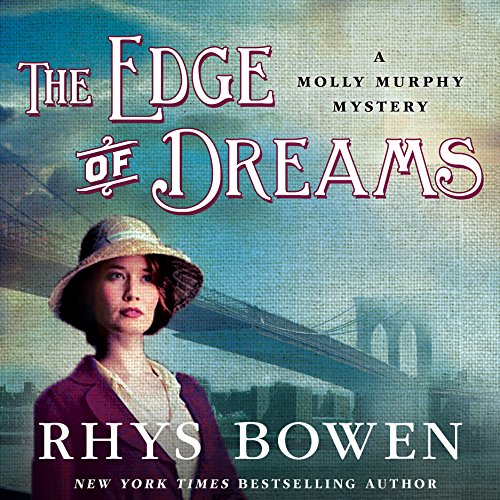 The Edge of Dreams

By: Rhys Bowen
Narrated by: Nicola Barber
Try for £0.00

Molly Murphy Sullivan's husband, Daniel, a captain in the New York City police force, is stumped. He's chasing a murderer whose victims have nothing in common--nothing except for the taunting notes that are delivered to Daniel after each murder. And when Daniel receives a note immediately after Molly and her young son, Liam, are in a terrible train crash, Daniel and Molly both begin to fear that maybe Molly herself was the target. Molly's detective instincts are humming, but finding the time to dig deeper into this case is a challenge. She's healing from injuries sustained in the crash and is sidetracked by her friends Sid and Gus's most recent hobby: dream analysis. And when Molly herself starts suffering from strange dreams, she wonders if they just might hold the key to solving Daniel's murder case.

Rhys Bowen's characteristic blend of atmospheric turn-of-the-century history, clever plotting, and sparkling characters will delight readers in The Edge of Dreams, the latest in her best-selling Molly Murphy series.

What listeners say about The Edge of Dreams

The Edge of Dreams

This is a brilliant detective story and although she struggles to make sense of it, in the end she puts herself in danger to find the truth. Read brilliantly by Nicole Barbara

I enjoy this series but wish the narrator did a better job with the male voices. They all sound like they have a lisp! This story is about a serial killer; Molly gets involved with husband Daniels' case after nearly being killed herself in an accident. Its a pretty good plot and evolves with a few twists. I do find it amusing that Molly is always able to find things the police don't; its odd that the cops are that inept. Still the character of Molly and her various friends do make for an enjoyable story. The series was better before she was married although Daniel was a bit better this time in that he let her help with the case. I hope that trend continues because its very tiresome when he complains about it so much. He is kind of an overbearing bore!

Another hit in the Molly Murphy-Sullivan series

I could not stop listening to this book and finished it in one day. I love these mysteries and can't wait for the next the next one.

I love this Series !

From the first book I was captivated. The narration is excellent, All-around I highly recommend this book and the entire!

I love this series. Molly is a great character. The mysteries are fun and I enjoy Nicola Barber's reading of the book. However, I don't understand why the author chooses to portray Molly's husband as she does. To have a major character that you should like be one you grow to increasingly hate makes no sense. And oh do I hate him. In one book he gets deathly ill and I sooo wanted him to die from it, but at least he was out of most of the book . The previous book took place in Paris was great because he was barely in it. In this book a murderer takes special interest in Daniel, and I hoped he would kill him. or at least put him in the hospital for a few books. Molly is portrayed as a plucky and strong character yet she ties herself to this domineering boor. Luckily this book seems to finally allow a transformation that was long overdue. He starts out as awful as always but over the course of the book he works with Molly as a team and respects her help..something that should have been done a long ago.

Much improved on narration

The last two book’s narrations lacked some editing, but this one was much better. Great storyline, tooo

I've listened to all the books in the series and enjoyed them all. The narrator always does a fine job and the story moves along. There was an increased presence of Molly's husband in this particular story, and he isn't my favorite character, so putting up with him was a bit of a chore: you know how it is if you have a best friend and you really don't like their spouse? Yes, kind of like that. He is really a pompous fool most of the story, very high-handed and condescending. Whenever he is absent from the story, it improves dramatically!

Mollie and Daniel become a Team

At last Daniel stops being a pompous ass and accepts Mollie's help. About time! Another great story in the series.

Another interesting murder mystery in the series. Rhys Bowen books are like your favourite chocolate -- you know what you're going to get and its never disappointing

The Molly Murphy series is wonderful! There is always a great plot, and the characters are so interesting! I certainly hope the series continues and the next book comes soon.

Love the returning characters. Have a harder time with the way they interact with each other.
I myself would have difficulties with someone telling me what to do . Feel more self-sufficient as a women. And like to feel my opinion counts for something. Figured out who the perpetrator was early. Still it was GREAT FUN!!