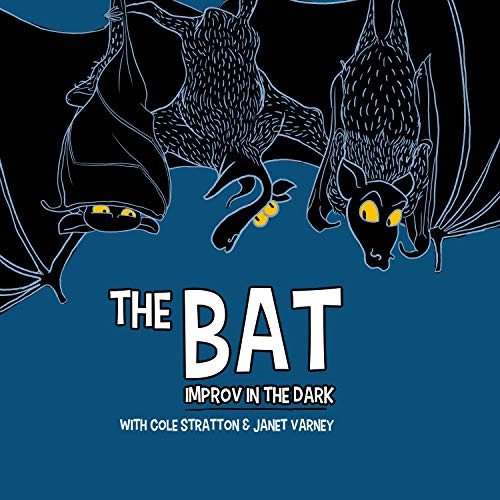 Hosts Cole Stratton and Janet Varney join four guest improvisers to create this show in total darkness in front of a live audience at a comedy club in California. The characters and the conflicts are all based upon the one-word suggestions from the people in the room and are enhanced with music and sound effects. Episodes feature a unicorn who plays board games, a talking dog that saves the day, and a boy who escapes from a bubble to pursue his passion for coin collecting.

Janet Varney is an Emmy-Nominated actor, comedian, writer and producer. She played the award-winning voice of Korra on the Nickelodeon hit The Legend of Korra. She co-stars on the IFC show, Stan Against Evil and the FXX comedy You’re The Worst. She was the host of the beloved TBS show Dinner and a Movie and was a regular on the series Burning Love.

Cole Stratton is an actor, improviser and writer based in Los Angeles. You may have seen him on the TV shows, American Horror Story, Nash Bridges, and Good Girls. He writes and performs comedic commentary for films on RiffTrax.com, an online venture helmed by the creators of Mystery Science Theater 3000.

What listeners say about The Bat

. . . to tell me I didn't want to listen to any more. It took a second to remind me that sometimes you can rely on first impressions. While I'm not the brightest bulb in the firmament I didn't need a third. In a way an improv show performed in the dark is an interesting idea and the actors do keep the momentum up quite impressively but, it just isn't funny.

Poor, unfunny, and painful to listen to.

I had to stop listening before the end of the first episode because it was just depressingly bad. None of the jokes landed and the whole thing was just awkward. I feel sorry for the live audience.

So American. “OH MY GOD” in Janice’s voice from friends pretty much sums up the comedic value of this audio programme. I was very disappointed in the comedy and even more so in the delivery. A narrative is hard to accomplish in improvisation, and it took less that 10 minutes for me to realise this wasn’t my type of comedy. No wit. Few puns. Much disappointment

has to be funny to be comedy this isn't

in the dark no one can see you leave! even if it was free I would not finish it. it was free and I didn't

Funny and worth it!

I find audio comedies a bit hard to listen to sometimes, I know they're supposed to be funny but they occasionally don't hit the mark, especially improv. This is different. there are some very skilled performers in this show and there were some laugh out loud moments. really r commend, it's one of the better ones. a particular fave from the pancake episode when I don't my tea out when someone said "so, do we actually get our pancake?" - brilliant and imaginative and works really well in audio. Well done all on a well devised and entertaining show.

Too 'American' for me

Sorry, I'm sure Americans love this but I find it difficult to understand. This is because I am from the UK.

Funny improv that is technically long-form but delivered in bite-sized doses. And the sound and vocal effects spice things up a bit.

Few laughs here and there with randomness!

A decent listen consisting of random improv that sometimes hits the mark and other time doesn't. Definitely had a few chuckles, but wouldn't re-listen.