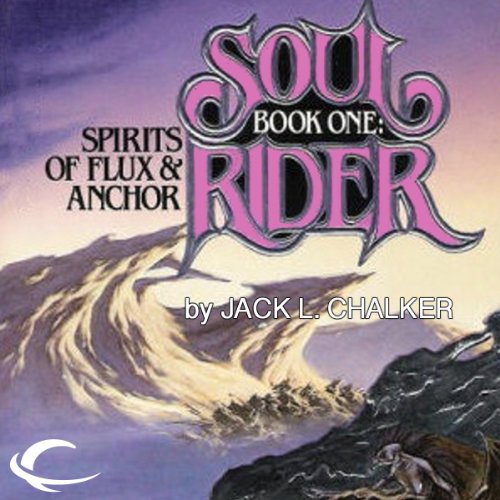 Cassie did not feel the soul rider enter her body...but suddenly she knew that Anchor was corrupt, and that, far from being a formless void from which could issue ony mutant changelings and evil wizards, Flux was the soure of Anchor's very existence.

The price of her new knowledge is exile, yet Cassie and the Rider of her soul are the only hope for the redemption of both Flux and Anchor.

What listeners say about Spirits of Flux & Anchor

definitely needed a female narrator as most of the cast is female and author makes them sound unrealistic and flat.

If you've read any of my reviews of Chalker's work, then you know I'm one of his biggest fans. Why? Simple. He frequently twists the scifi and fantasy genres, writes deep adult literature that engages, devises exceptional plot lines, crafts characters with "character," and throws our perceptions of what to expect on it's ear.

In two words: "He delivers."

And in Chalker's Soul Rider series, he delivers all of those things, and in spades.

Now, prepare yourself. This isn't for children. It's for adults, and at times it will push your buttons severely. It will challenge your perceptions of the sexes, may upset you, and does not give you a huge background story upfront (It's revealed MUCH later.). So, you know what this means, dear Audible reader.

Uh oh - You're going to have to THINK.

Will I tell you the premise? Some of it, but nowhere near all. Why? Because as usual, I feel the journey can be spoiled, especially in this fantastic series. Also, Chalker gives no hints, and I want you to at least have a bit of background. So, pay attention - Here we go.

Imagine a world draped in the fog of flux powers drifting on the winds, a paradise, purgatory and hell combined, one that humans can, if they have the very rare ability, control the flux, to "magic" the very forces of nature around them, to even change the minds, passions and bodies of men and women. They can, with enough flux control, craft cities and even command nature to create a personal paradise out in the flux. Imagine cities sparsely scattered across the landscape, each unique, each having a tenuous hold against these unbridled powers that vie for control. Each holds back the flux and its wizards at bay by resorting to totalitarian, religious, military or even otherworldly sway over their masses to maintain control and wealth.

These powers are not judicial in their choice of who can shape the flux - Heroes, villains, maniacs, zealots...there are no moral boundaries of who is chosen, and the few cities across the flux have their own a shaky and tenuous trade agreements maintained by stringers, humans who trade goods, services, and even people to their own ends. Wizards themselves, they live out in the flux, but like anyone who rides the flux, you stay in the flux too long, YOU become twisted in your own dark nightmares, and eventually are driven insane.

But there is more...

There are dark forces, unseen and unexpected, beneath all this. Inhuman. Unfeeling. They have a sweeping, world-changing plan. And they have chosen a human to join with, to make this a reality. And the human host has no idea that this has already begun.

Would you believe there's more? A LOT more?

Well, there is, and again, Chalker DELIVERS. I read this series a long time ago, and consider it timeless and required reading. This thought-provking and challenging listen and its sisters in the series belong in any Audible fantasy or scifi listener's collection. You'll listen to this more than once, because it's incredibly rich in story, and you'll get more out of each listen.

So, its Christmas in February! Thanks, Audible! This is a present that I won't return!

A different narrator. I read these books years ago & was looking forward to the audio version, but was only able to make about 20 minutes into the audiobook before bagging it. I found the narration unlistenable.

Inappropriate and omnipresent emphasis, like every single phrase has a secret meaning. It's annoying as hell. This is the second worst performance I've heard on an audiobook. (The worst was Victor Bevine's performance on _This Immortal_.)

First adult scifi book I ever read- so excited!!

Would you consider the audio edition of Spirits of Flux & Anchor to be better than the print version?

sorry, no- the narrator's characther voices are pretty bad- and have heard him mix up characters a couple times.

As a young adult, I loved all the gender bending fantacy aspect.. as an adult, I love they way they get right to the corruption of the church. I just like the ways the story flows..

Who would you have cast as narrator instead of Andy Caploe?

First I would have cast a female- i mean, the whole series if from a female perspective, so to use a male narrator (one the does horrible female voices to boot) is just wrong..maybe Marcella Rose Sciotto

i'll get back to you on that.. I havent finished it yet.. just wanted to rant about the narrator

Biggest Disappointment from Audible yet

This is the first book in the series of a set of books that has been one of my most favorite since it was first published. I've read them all more than a few times. The basic premise is brilliant, and over the course of the series, you get tantalizing glimpses of what's really going on, while still having a rousing story from the beginning.The characters always felt fully fleshed out - impressive in a setting when who and what they are can change in an instant and often does, yet the author manages to make it all flow along. When I saw that the books were available -finally!!! - in audio, I literally bounced in my chair and couldn't' wait to download and start listening, knowing that this would be hours and hours of listening joy.Then the narrator started talking.

What was one of the most memorable moments of Spirits of Flux & Anchor?

If I give any moments, it will only spoil a surprise - all the best moments are plot twists. But I love the World that Chalker created here - small pockets of "Anchor" where normal natural laws apply, surrounded by a whole World of glittery foglike Flux that those gifted with the ability can literally shape to their will like magic.Many of the main characters actually think it is magic, but we get tantalizing glimpses from the beginning that there is More To The Story, which plays out over the whole series.Whether you're a fan of organized magic or hard science, or even science fiction looks at things like politics, gender roles, political corruption, or just a good yarn, the book is a great start to a fantastic series.

Fully two thirds of the major characters are women. The protagonist for the whole series is a woman, who starts out at around 16. Other "characters" are the mysterious, etherial, but essentially benevolent, if somewhat clueless, "spirits" of the series title.Who chose this narrator? He'd be good with a hard-hitting detective novel or a gritty action adventure, with fast cars, fast women, and lots of guns. But he simply can't do female voices - they just sound stupid when they don't sound like breathy teenage boys. And everyone else sounds like they're in the mob. Including the women.The whole tone of the society should be coming across as the Old West, with periodic visits to The Big City - you find out just why in later books. This is the worst book to narrator mismatch I've ever encountered, and that's saying something.There's a couple of decades of fervent wishing for these books on audio shot all to hell.

Was Spirits of Flux & Anchor worth the listening time?

I honestly don't know. Seriously, these are among my favorite books of all time, and just being able to listen to them is a joy, but the narration is like nails on a chalkboard and so violently wrong I alternate being thrilled to listen and outraged and incensed at the performance - or more accurately, the horrendous choice of narrator. If I didn't know and love the books, I don't know if the narrator would be so grating, but I also don't know if I'd want to hear any more, or if I would even finish the book.

Give it a try. It's a great story, and one of the most amazing science fiction series of all time. I'm hoping that I come to terms with the narrator and can stomach the rest of the audiobooks.

Would you consider the audio edition of Spirits of Flux & Anchor to be better than the print version?

No - the performance is the worst possible. This needs to be redone by a female. The main character is female and this reader makes all female voices sound like gay football players. Very distracting and difficult to get past. You will find yourself laughing and shaking your head at the reader during serious moments because the voices are so ridiculous.

What other book might you compare Spirits of Flux & Anchor to and why?

This book has few comparisons. I can see it's influence in many sci-fi books that were written after, but nothing that came before.

The female voices were horrible, and many of the male voices were over the top. Since the main characters are female, and there is quite a bit of dialog, this makes for an uncomfortable listening experience. It takes quite a while to ignore the reader.

fun to hear it while driving

I love being able to listen to books I enjoyed reading years ago while driving and running errands.

the only sci fi books i liked

What made the experience of listening to Spirits of Flux & Anchor the most enjoyable?

Where does Spirits of Flux & Anchor rank among all the audiobooks you’ve listened to so far?

One of my all time favorites.

No favorite. It is a strange world and I can't really love or hate any of the characters. It is more of a package deal that requires all of them to create the story line. It is important to turndown your moral filter and appreciate the characters for who they are in the environment where they live.

What does Andy Caploe bring to the story that you wouldn’t experience if you just read the book?

Andy is right up there with the best I have heard. I don't have time to read, so without Andy, I would still be waiting to retire so I could get out my hard copy.

Been waiting a long time for Audible to add Chalker to the line-up. I fervently hope they plan to include the Well World series.