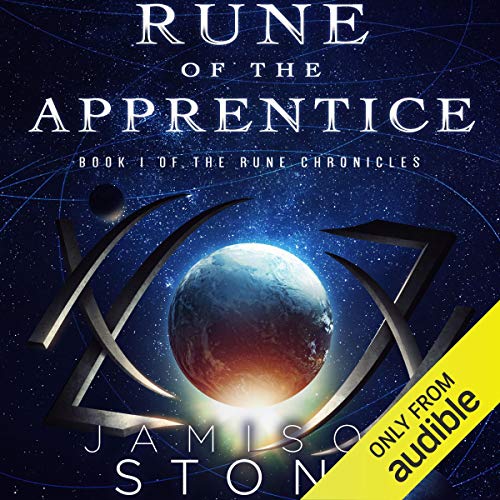 Rune of the Apprentice

By: Jamison Stone
Narrated by: Kevin T. Collins
Try for £0.00

In a world where magic, technology, and nature have merged, the few who can control Runes hold dominance over all of creation. All believe that Aleksi, a 16-year-old orphan, was blessed to be born with a Rune embedded in his palm, but that's only because they don't know the truth - Aleksi's Rune is so powerful it's killing him.

Asura, a brutal emperor who uses Runes to conquer entire continents, will stop at nothing to kill Aleksi and claim the boy's power for his own. With Aleksi's Rune burning its way through his body and assassins hunting his every step, his survival depends on discerning ally from enemy and learning to tame the competing forces of light and dark within.

With the burden of his rune haunting his days and the prophetic whispers of a young captive priestess illuminating his nights, Aleksi will be able to unravel the mysteries of his past, rescue the girl in his dreams, and challenge the most powerful warlord the world has ever known only if the one thing keeping him alive - his Rune - does not kill him first.

What listeners say about Rune of the Apprentice

a dire reading of a unremarkable book

the story is unremarkable and the reader is atrocious. it's like having your teeth pulled.

Decent book, even though a bit clichéd

I was initially turned off to the whole "one man fulfills his destiny in the fight against good and evil" vibe. The first couple paragraphs read like a list of fantasy tropes. The book is extremely theatrical and nobody speaks like an actual human being. However, I eventually got into the story and got past the dramatic presentation. The narrator slurps while speaking, which is a bit distracting, but he puts emotion behind all of the characters. Make sure to listen to the sample to see if this book is for you.

had a lot of potential

Rune of the Apprentice is the first novel in a series called Rune Chronicles by Jamison Stone. Aleksi was born with a rune on his palm in a world where control of runes imparts extreme power. Those who can control runes become powerful and can control others. However, Aleksi's instructors don’t know that his rune is so powerful that the awakening power is slowly killing him. Thus, to save his life, Aleksi sets out on a quest to find his absent mentor who is wanted for crimes against humanity. During this journey, Aleksi meets a variety of people including a ship full of pirates, fighters, and a captive priestess. He becomes entangled in their lives, while still trying to maintain his secret and prevent his rune from killing him.

This story had a lot of potential to be really good, but it was too confusing for me. It is a complex world and the workings of it were not completely clear. However, the magic structure did seem to be unique. Fortunately, in spite of the confusion, the story was pretty interesting. There were a lot of characters, and I actually liked the pirate ship captain and his crew a lot. Aleksi, by comparison, was not as exciting and preoccupied. His coming of age story must progress through the next novels, but he appears to grow little in this novel. The growth is intellectual and hopefully, that will translate to character changes as the novel continues and he comes to terms with a revelation from this novel. A lot of the story takes place on a ship, which is not as confining as it may seem. However, there was a lot of description of the ship’s components like the different rigging and the boom that could get boring. The novel ends at a stopping point, but there is not resolution. Overall, the story as a lot of potential, but the world needs to be a little better explained.

This novel was narrated by Kevin T. Collins. I personally found the narration irritating. Each word was so deliberately forceful that it was distracting, but an effort was made to make the characters distinguishable. The production quality of the novel was good. I would recommend this novel to anyone who enjoys high fantasy with unique magic structures and sea-bound stories.

I'm always apprehensive about a new author and let me tell you this one really fulfilled. Visceral descriptions, captivating plot line, 10 out of 10 for me. The voice actor is a little rocky in the beginning but quickly fills the shoes of the book. Great job all around.

Epic fantasy from a fresh voice

Highly detailed and engrossing, this epic fantasy sci-fi adventure kept me enthralled by its intriguing world, interested in its colorful characters, and coming back for more due to its fast pace and story driven excitement. Very much looking forward to book 2!

slow start but sets the series up well

It started and pretty much stay slow but the author seems to be setting up the characters and series up well. looking forward to the next book to see how well the storyline goes from here.

What a fabulous new author! I absolutely loved this book. The only disappointment is that I have to wait for the next book to be written. I want it now!
In the future, expect we'll see even great things from Jamison Stone.

This was a great story, very well written. It grabs the reader from the prologue and only builds all the way through. I cannot wait until the next one comes out. The characters are well written and relatable.
This was my first experience with audible and I thought the reader did an exceptional job too making it a fun listen.

I don't know it I can get a refund. but I want the 3 hours I put into this book back.

Too much background information

This book is long winded as the author tries to explain things with as many words as possible. Its boring to listen to and has no

I stopped listening at the 4 chapter because it is all the same. By the 4th chapter, not one of the characters are ever developed to a point that I start to car.

The narrator is constantly sounding excited and is going through the book at a record pace. It becomes like watching a NASCAR race. It seems exciting, but then you realize its just driving in circles. Then you start drinking and hear the cars as white noise in the background.

In all, too much background information on ultimately useless things with a narrator that tried to make it exciting.