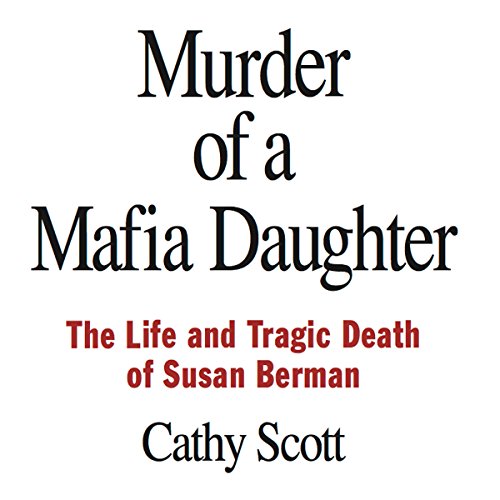 Murder of a Mafia Daughter

By: Cathy Scott
Narrated by: Kevin Pierce
Try for £0.00

Susan Berman grew up in Las Vegas luxury as the daughter of Davie Berman, casino mogul and notorious mafia leader. After her father died she learned about his mob connections. Susan then dedicated her life to learning about Vegas and its underworld chiefs. Her life took a bizarre turn in l982 when Kathie Durst - the wife of her good friend, Robert Durst - mysteriously disappeared. Kathie's husband was a prime suspect but the case was never solved. After the Kathie Durst case was reopened, the DA was about to question Susan Berman about what she knew regarding a phone call Kathie supposedly made to her medical school dean saying she was sick and wouldn't be at school. The call was placed the day after Kathie had vanished. Soon after the Kathie Durst case was reopened, Susan Berman was found dead, shot in the back of head. No forced entry, no robbery, nothing missing from her home.

The book covers what led to Durst's capture. Police records placed him in California at the time of his good friend Susan Berman's murder. HBO filmmakers discovered a letter unknown before, written by Durst to Susan. It was a dead-on match to the cadaver letter police say the killer sent before Susan's body was discovered.

What listeners say about Murder of a Mafia Daughter

The Story of Susan Burman

Wow. MURDER OF A MAFIA DAUGHTER was a real eye-opener. I don’t recall ever hearing about Susan Berman unless I possibly caught a glimpse of her story on Unsolved Mysteries or Dateline. Her story is an interesting one. She was a journalist, a writer, and the daughter of a Las Vegas mobster. Growing up, she was privileged but also protected from knowing her dad’s true business. She seems to have been a very complex person but when all the people she loved in her life died, she was lost. After becoming involved with Robert Durst, everything changed. Whether or not he killed her, I wouldn’t begin to know. This book sheds light on her story in an unbiased way.

The book starts out with her death and the crime scene. I was shocked to hear how tainted the evidence was and don’t know how or why anyone would enter a potential crime scene and move things around or touch anything. It then goes on to tell her story from childhood to adulthood right up to the week of her death. She was eccentric, quirky, and seemed to be a very smart woman. She also appeared to be enjoying her life. She was busy writing and working on television shows and like most people, had a few ups and downs. Then one day she was found shot in the back of the head in her home where nothing had been out-of-place.

Another interesting part of this book was the story of her father Dave Berman. It talks about how he grew up and moved to Nevada as well as a few of the people he was associated with. He was from Odessa in the Ukraine and migrated to the U.S. Hearing about his life in the mob was intriguing to say the least. The whole thing was fascinating to listen to. I don’t know how I feel about peering into another person’s extraordinary life after they’ve passed. And many of the people in this book are still alive.

To sum it up, this was still a good listen. If you like true crime then this is definitely it. I don’t feel anyone is passing judgement, they’re just telling a story. And I don’t want to pass judgement either.

Kevin Pierce did a superb job narrating this book. He was straightforward and humble. He told the story the way it should be told. I feel that him reading a story like this shows him as more than a narrator but also as an empathetic person. He did the story justice and was the perfect person for this work.


Audiobook gifted in exchange for review.

The first chapters tell the story, after about chapter 3 it's old news. Seems like there wasn't enough material to write much more than an article.

What did you love best about Murder of a Mafia Daughter?

I enjoyed the historical facts, very interesting details of how it used to be. I did not know much about this case so it was fresh and riveting. It is a well written true crime full of details but not boring at all. I will positively look for more by this author.

What other book might you compare Murder of a Mafia Daughter to and why?

Compared to other true crime books this one is very good. It is not full of dry facts or court transcripts. I actually feel like I got to know Susan as a person and not just a victim.

I think his voice is perfect for true crime, very clear, almost soothing and perfectly paced. To me he sounds like a police detective.

No extreme reaction but sadness at how much tragedy can happen to one family.

I received a free copy of this book in exchange for an honest review.

THE MOST REPETITIVE AUDIO BOOK EVER!

It's an interesting and compelling story. But book itself is poor due to the repetition of the same facts over and over. How many times did we need to know that Durst's lawyer wore cowboy boots and carried a Stetson into the courtroom? Also, the narrative was haphazard. Had it not been for the excellent narrator, I would have abandoned this book after a few chapters.

No, but I will be looking for his name. He's excellent, especially in the true crime genre.

Was Murder of a Mafia Daughter worth the listening time?

The narration saved it. It's a poorly written, overly repetitive book.

This is an interesting story and the author definitely had a lot of information, however she tended to repeat passages verbatim, to the point where I would check to make sure I didn't accidentally go back in the book. Also she jumps around in Susan Berman's life, which in itself is fine, however there was a big section where they kept bringing up that she lived with someone for 5 years and it wasn't until the book was almost over that it was revealed that that person was he daughter. It would have been nice to have that information at the time she was discussing their living situation.