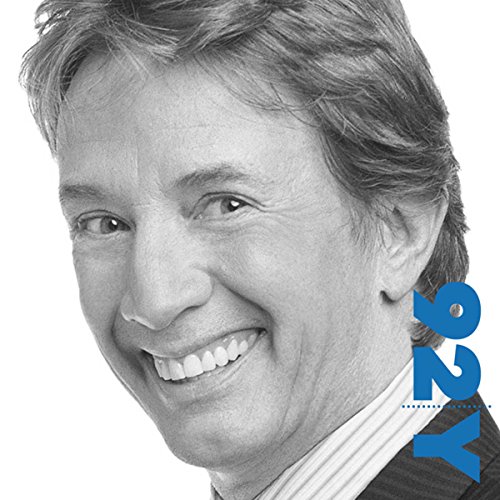 Martin Short with Dick Cavett at the 92nd Street Y

Martin Short with Dick Cavett at the 92nd Street Y

Comedian Martin Short has been pushing the boundaries on what is possible with comedy for the past several decades. Some of his highlights include, amongst the countless memorable film roles, his work with SNL, SCTV, and his characters such as Jiminy Glick and Irving Cohen. The 92nd Street Y, in continuing with their longstanding tradition of hosting groundbreaking entertainers such as Short, presents a night of hilarious and intimate conversation with Short and the iconic and innovative talk show host Dick Cavett. Listen along with delight as Cavett and Short talk about the comedian’s storied career and his recent return to Broadway.

Martin Short, one of today's most inventive and popular comic actors, is best known for his work on Saturday Night Live, SCTV, and in the films The Three Amigos and The Father of the Bride. The creator of such memorable characters as Jiminy Glick, Ed Grimley, and Irving Cohen, Short returned to Broadway in the "alternate autobiography" Martin Short: Fame Becomes Me.

Here he talks with Dick Cavett, the host of The Dick Cavett Show, which was a late-night talk-show home for top rock bands and comedy legends, such as Groucho Marx, Jack Benny, Bob Hope, and countless others.

It seemed like a "can't miss" selection. Martin Short, the funniest man on the planet being interviewed by Dick Cavett, a brilliant interviewer, wit and raconteur. But Mr. Cavett seemed to forgot that he was the interviewer, not the interviewee. He acted as if he were on the stage to amuse Mr. Short with his own anecdotes.
It would have been so easy to let a brilliant comic like Short loose with all his incredible energy and characters. Everyone would have gone home thinking how brilliant Short was and what a wonderful job Cavett did showing off Short's brilliance. Best of all, I wouldn't be writing this review.
But instead Cavett blocked Short at every moment, recounting stories about entertainers of an era long before Short's (Milton Berle, Fred Allen, Richard Loo?!)
Let's be fair and say Mr. Cavett was having a bad evening, or he and Mr. Short didn't have any chemistry. It happens. But that's no excuse for selling this debacle to Audible's subscribers.
I assure you I will survive very well without my 99 cents, but I should have it back just on principle..

This was disappointing. Short comes off well, but Cavett, who is usually such a wonderful interviewer, indulges in a non-stop, awkwardly self-referential name-drop fest. He also seems to be slurring his words, which is alarming -- I don't know what was causing it, but it actually made him sound a little impaired at times.

I admit I got this almost BECAUSE OF, rather than despite, the negative reviews, pretty much for the same reasons one slows down to gawk at a bad accident on the highway: sheer morbid curiosity. Having been duly forewarned by other listeners, I just wanted to gape in horror as Dick Cavett put in the worst interview performance of his career, turning an ostensible interview with truly great comic actor Martin Short into an overtly self-pleasuring Look-How-Many-Famous-People-Totally-Unrelated-To-Martin-Short-I-Can-Quote-And-Imitate-And-Belittle performance. As a speech therapist, I was also eager to judge for myself whether Cavett's well-described "slurred" speech indicated an actual dysarthria (likely the result of a stroke or other neurological event or condition) or simple inebriation/drunkenness.

Even thus forewarned, however, I was unprepared for the scope of this lamentable spectacle. By the end of this fiasco (which HAS to rank as one of the greatest debacles in entertainment history, right up there with the time actor Crispin Glover tried to kick late night host David Letterman live on his show), not only has the normally unfailingly polite and kind Short begun to openly and hilariously mock his interviewer, but the audience, too, is openly heckling Cavett, going so far as to boo his self-serving anecdotes and shout "Just read the [audience-written] questions!" Finally forced to at least pretend to accede to this request, Cavett unbelievably begins reading questions obviously intended for Short, but attempting to answer as himself. When the audience and Short object, he starts "reading" questions he is clearly just ad-libbing on the spur of the moment as set-ups for a punch line only he can deliver.

I won't spoil the hideous ending.

In short, this is REALLY, REALLY BAD-- so bad it's fascinating. Highly recommended only for the morbidly curious, like myself.

Would you listen to Martin Short with Dick Cavett at the 92nd Street Y again? Why?

Yes I will listen to it again. I am a huge fan of Martin Short and have enjoyed Dick Cavett on many occasions. So to have two legends of the entertainment industry bantering back and forth for almost 90 minutes was great.

What other book might you compare Martin Short with Dick Cavett at the 92nd Street Y to and why?

Some of the stories that Martin Short told in this interview he also tells in book "I Must Say: My Life as a Humble Comedian." I highly recommend both this that audio book and this one for all Martin Short fans.

Have you listened to any of Dick Cavett’s other performances before? How does this one compare?

I have seen Dick Cavett on television a few times growing up, and as near as I can recall this interview was very typical of his style.

I don't know that there was anything in particular in this audio interview that I would call moving, per se. I was moved in Martin Short's memoir, mentioned above, when he described his wife, Nancy, battle with cancer and her death in 2010.

This was just typical Martin Short humor, and is well worth the paltry sum I paid for it.

Like his memoir/autobiography, this is MUST HAVE for all fans of Martin Short and Dick Cavett.

Would you listen to Martin Short with Dick Cavett at the 92nd Street Y again? Why?

I really enjoyed this banter between two very funny and very smart people. Cavett does get a bit self indulgent and he tells a couple of the same stories that he told in one of his book, though they are good stories and I actually enjoyed hearing them again.

Short was not short on laughs

Without ever getting to know much about Martin short I laughed while walking for an hour .