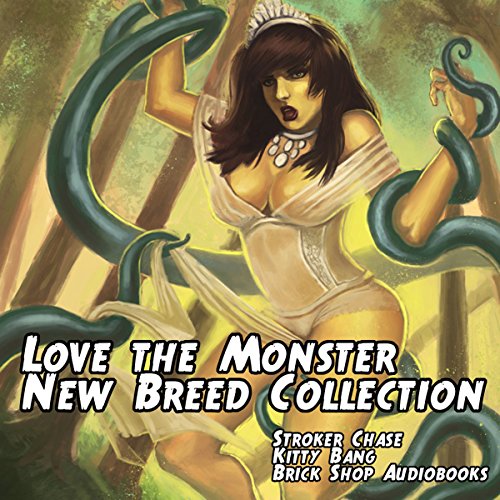 All three Love the Monster: New Breed stories in one book!

"The New Breed", "Bred to the Beast", and "Virgin for the Beast"

The fantasy series Love the Monster continues in the land across the sea from Mina. News spreads of the monster in Mina, but all councilors to Princess Rena's father, King Silas, scoff at the idea. What they don't realize is, the monster is much closer than they think, and has its sights set on the prize of the kingdom, the beautiful Princess Rena.

"Bred to the Beast "

The Master's plan for Princess Rena is finally revealed. He wants to breed her to the beast.

Taken by a strange man and a monster, Princess Rena finds herself falling deeper in love with the beast. However, she doesn't trust the strange man called The Master, who reveals that he needs her to be bred.

Meanwhile, the last Sisters of the Sworn Swords, Selene, is captured as the King's slave. She watches as the King dominates and uses his bed maidens, all the while, planning her escape so she can rescue Princess Rena.

An erotica involving tentacle sex, pregnant sex, breeding, monster sex, domination, and submission. This is the second installment to Love the Monster: The New Breed.

"Virgin for the Beast"

When a monster ravages her city, their only hope is for Kayla, an innocent virgin, to give herself over to the beast.

Kayla is a beautiful, inexperienced virgin, and the city's only hope. When a beast attacks her city, she is called upon by King Silas to offer up her maidenhood to the monster. She accepts, and laid out on a flower bed in the castle courtyard, waits for the beast to take her.

This is the third and final chapter to the Love the Monster: New Breed series. A short, explicit fantasy erotica involving: tentacle sex, virgin sex, monster sex, and sex in public.

What listeners say about Love the Monster: New Breed Collection