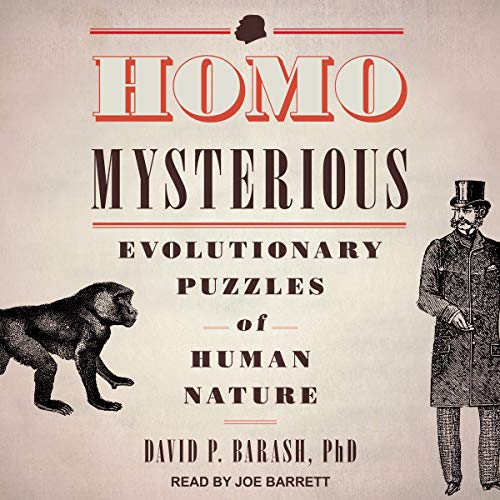 For all that science knows about the living world, notes David P. Barash, there are even more things we don't know, genuine evolutionary mysteries that perplex the best minds in biology. Paradoxically, many of these mysteries are very close to home, involving some of the most personal aspects of being human.

Homo Mysterious examines a number of these evolutionary mysteries, exploring things we don't yet know about ourselves, laying out the best current hypotheses, and pointing toward insights that scientists are just beginning to glimpse.

Why do women experience orgasm? Why do men have a shorter lifespan than women? Why does homosexuality exist? Why does religion exist in virtually every culture? Why do we have a fondness for the arts? Why do we have such large brains? And why does consciousness exist?

Listeners are plunged into an ocean of unknowns - the blank spots on the human evolutionary map, the terra incognita of our own species - and are introduced to the major hypotheses that currently occupy scientists who are attempting to unravel each puzzle (including some solutions proposed here for the first time).

Throughout the audiobook, listeners are invited to share the thrill of science at its cutting edge, a place where we know what we don't know, and, moreover, where we know enough to come up with some compelling and seductive explanations.

Homo Mysterious is a guide to creative thought and future explorations, based on the best, most current thinking by evolutionary scientists. It captures the allure of the "not-yet-known" for those interested in stretching their scientific imaginations.

What listeners say about Homo Mysterious