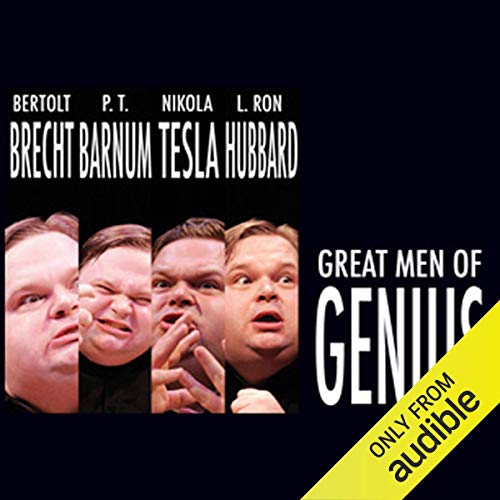 Monologist Mike Daisey presents a dazzling new work: four "bio-logues" about megalomania and desire constructed from the interleaved life stories of Bertolt Brecht, P.T. Barnum, Nikola Tesla, and L. Ron Hubbard. Over four nights Daisey explores the nature of genius and wrestles with the pride, insanity, and chauvinism that bind these men together, and reveals how the heights and depths of their gifts have much to teach us about ourselves. Each evening is unique and can be listened to independently, but all four together form an epic oral accounting of triumph and folly told with Daisey's dark and hilarious intensity.

The geniuses are, in order of appearance:

"Daisey is a master showman, combining the storytelling acumen of David Sedaris and Lewis Black's outraged humor." (Daily Californian)
"Mike Daisey's monologues brim with subtle messages that never hammer you over the head...by association, he adds himself to the titular category." (Time Out New York)

Certainly an extremely gifted storyteller. I'm nailed to the chair, partly nervous - because anything unexpected comes purging out of this massive man - and at the same time completely mesmerized by his words, especially how he uses his voice in sending the words towards me at tremendous speed and a massive power, which resembles violence.
Still I need to stay and listen intensely to every frase, every word - because everything embodied so rich meaning and understanding of what the real world and the (crazy) people placed in it.

This performance is funny, interesting, and unusual - a must hear!

Why did you decide to do a mash-up of vague biographies of "men of genius" and your own memoirs?

Shouldn't you do one or the other?

I would have liked that better.

Also, you need to do a little more research on the geniuses lives. Perhaps unearth some little known fact that the average History Channel viewer (me,) wouldn't have picked up in their various TV viewings or in their travels through a public library or bookstore. (I do that, too. Travel, that is. Through libraries and bookstores.)

You do have a lot of energy in your readings and applied to your performance. For that, I give you credit but also a bit of advice; Tone it DOWN. TOO MUCH SHOUTING and then weird softer modulation IS VERY ANNOYING. (Sorta like what I just did with those caps, right?)

I have a feeling that you will find a real voice if you get your objectives clarified about what you mean to relate in your monologues. Although I might be wrong in saying you may never end up in someone else's book about men of genius, you are obviously not a dumb guy and you do have a talent for stringing words together. You just need to get them to say something coherently.

P.S. I did get a slight whiff of a Garrison Keillor type homage in your presentation. Please don't do that. He got creepier and creepier as he aged. You'll want to avoid that.

I couldn't stop listening! Mike Daisey has a comic delivery very similar to Dane Cook -- I was laughing out loud and even went back a couple of times to hear a story or punchline again... This has become one of my all-time favorite listens!

Great to listen to while painting over photos

I’m always looking for things to listen to while making art - so far this is the best. Funny, incisive, and obviously an incredible performance - love.

The author is just too ridiculous.

I couldn't get past the author/reader. He was too obnoxious.

What made the experience of listening to Great Men of Genius Series the most enjoyable?

I was interested in Nokia Tessler. He was a man before his time because of his research on alternating current supply which had a huge effect on what we use for energy today. He invented the microwave and said we would use microwaves for not just cooking but communicating thus we now digital phones, using microwaves to to break up tummors. I did not have time to read about inventions so I load this in my MP3 and listen to it when I walk every morning.