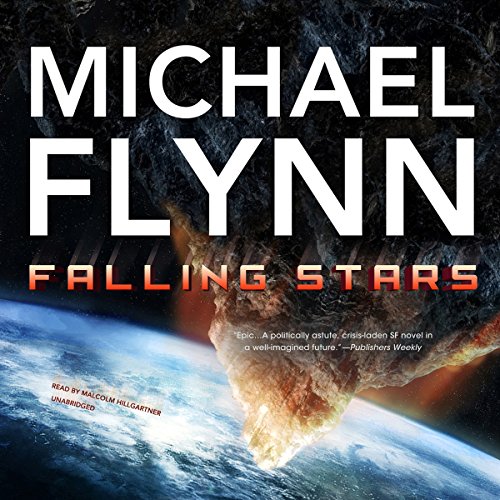 By: Michael Flynn
Narrated by: Malcolm Hillgartner
Try for £0.00

In the early years of the 21st century, humans have advanced step by slow step into space. Constantly monitoring the heavens, they have discovered that certain asteroids have changed their orbits—and are on a collision course with Earth. Urgent action is required, but politics and a worldwide financial crash are getting in the way. To save humanity from disaster, two of Earth’s prominent families, a host of political movers and shakers, and dedicated pilots and space travelers of all stripes must band together.

From the government offices and factories of Earth, to the low Earth-orbit station, to manufacturing facilities on the moon, all spacefaring humanity is united in an epic effort to save the planet from certain destruction and a new Dark Age—or perhaps even the extinction of all life on Earth.

"At heart a romance of the high frontier, and its most gripping—and moving—parts depict the satisfactions, beauties, complexities, difficulties, and especially the dangers, of working in space….Falling Stars is, even more than the earlier books of the series, a reworking of some of the motifs of Heinlein’s The Man Who Sold the Moon, and like its illustrious ancestor, it is about not only vision but heroism and sacrifice. It’s old-fashioned, sentimental, and moving." (Locus)
"Epic…. A politically astute, crisis-laden SF novel in a well-imagined future." (Publishers Weekly)
"The conclusion of Flynn’s grand-scale near-future epic combines the rapid pacing of SF action-adventure with the subtle maneuverings of political intrigue in a panoramic drama of human courage and sacrifice. A good choice." (Library Journal)

What listeners say about Falling Stars

I was interesting, made you want to know what was going to happen next. The story moves along fast that other books in the series but is not in a hurry to get to the end.

this series was good and I enjoyed it, but it is not very fast paced and though there are many times that you don't want to stop, that are also many times where I found myself a little board and took long breaks (a day or so).

This author has captured a concept that spans generations, tells a captivating story that is as believable as life.

I loved every minute, but I especially loved the characters and their relationships... this author knows people.

Long store. ... and a little hard to track

The base story premise is interesting. However there is a lot of characters that carry through almost all four books. I didn’t really find any of them compelling. The action portions were a few islands in and ocean of dialogue. The unknown enemy is never explain it there motives defined. Just my opinion. More words doesn’t fill in for story line and a good bad aliens.

Really enjoyed this one. It seemed to take a new tone which is a little darker but more mature.

went where I thought it would but still was a satisfying conclusion to the series.