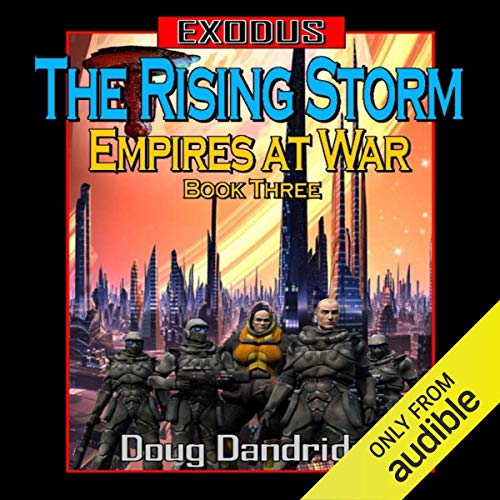 They're back, and they want to end us.

The Ca'cadasan Empire is at the gates, and they mean to destroy the human race. But we will not go quietly into the night.

The saga continues as Sean Ogden Lee Romanov finds himself the uncrowned leader of the New Terran Empire. After 2,000 years, the old enemy has found them, but the humans are no longer the technologically inferior species they once were. A thousand years of Empire has forged a mighty military that has never lost a war. The Ca'cadasans are still slightly ahead in tech, are much larger, and have never failed in a conquest. There is dissension within as Parliament wants to put their own man in charge, and Sean is woefully unprepared for the task that awaits him. Time is running out, and if the Empire and the species are to survive the new man must be installed, and humanity must rally behind him. New technologies are on the horizon, the technologies on which the course of the war could turn, for better or worse. War rages across the stars on a galactic scale. The third book of a series that will span over a century of time and tens of thousands of light years of space.

What listeners say about Exodus: Empires at War: Book 3: The Rising Storm

This book in the series is long, but never really dragged at all for me. It was fairly continuous action throughout and didn't get stale. I actually found myself doing the thing that is a hallmark of a good audiobook - I found excuses to keep listening!

Where does Exodus: Empires at War: Book 3: The Rising Storm rank among all the audiobooks you’ve listened to so far?

learning more about the enemy and the new emperors choices, he is turning out to be a worthy leader

when Cornelius takes revenge over for his wife

I'm mainly posting a review because this series already has 8 books out, and only 3 are on audio, and would love to hear more being I work a lot and cant sit much to enjoy reading a book, they are so well done and the Narrator does an excellent job and bringing these books to life

Where does Exodus: Empires at War: Book 3: The Rising Storm rank among all the audiobooks you’ve listened to so far?

I listened to all three in a row, which I recommend. This is solid military space opera and,, if you like the genre, you will enjoy this. It's not as well developed as early Weber or Ringo and the battles are repetitious if only because of the physics of the battle space. These books could use more character development. The plot lines are interesting and a little unpredictable, which is good. This last book ends on several cliff hangars, so be ready for that and for the next installment. The narration improved dramatically in the last book, which is a plus too. I would rank this as not quite as well written or performed as the Koban series, but still worth your time and money.

I'll buy the next book in the series as soon as its available.

please hurry with book 4. i can't seem to stop listening to them when I get them.

Excellent continuation of what is turning into a great old style space opera series. An addictive listen. Do not pass this up.

Loved it. Love the entire series, so far. I have the first five audiobooks of the series. Looking for more.

Story started with a bang then fizzled to a flop

First book was good, then author was pushing to find a way to continue.