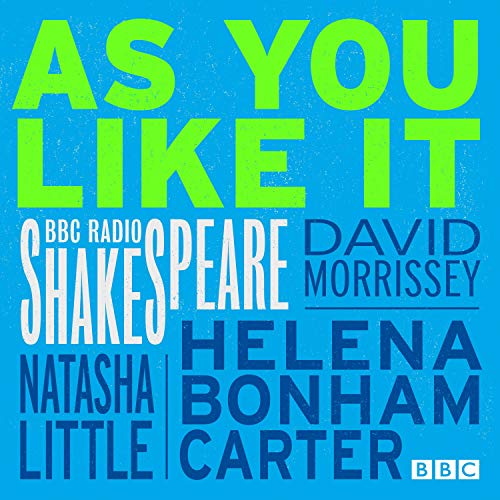 In this BBC full-cast production of As You Like It, Rosalind is banished from the Royal court, heartbroken over Orlando. Will the two find a way to reunite?

A comedy of wit, disguise and love, Shakespeare's tale about the enchanted world of the Forest of Arden remains as moving as it is funny.

Helena Bonham Carter stars as Rosalind, with David Morrissey as Orlando and Natasha Little as Celia.

BBC radio has a unique heritage when it comes to Shakespeare. Since 1923, when the newly-formed company broadcast its first full-length play, generations of actors and producers have honed and perfected the craft of making Shakespeare to be heard.

In this acclaimed BBC Radio Shakespeare series, each play is introduced by Richard Eyre, former Director of the Royal National Theatre. Revitalised, original and comprehensive, this is Shakespeare for the modern day.

This is superb. I didn't know the play but was hooked from the word go.

All the cast are wonderful- This is one of the best Shakespeare dramatisations that I've heard from the BBC.

It is not unabridged- which is both a strength and a weakness- they have struck out virtually anything that could be obscure- so it all romps along beautifully- and yet the purist within me feels slightly short-changed by the abridgements.

Secondly the music is probably the productions weakest point. They keep the singing to a minimum which under the circumstances is probably a blessing.

All the cast are amazing with no exception! easy to follow and definitely the best example of a Shakespeare Audiobook i've seen so far!
The only weak points (but this is just me being picky) is that sometimes Rosalind and Celia's voices are slightly too similar to flow clearly. - However thats probably just me. Also the fact its not the unabridged version is a mixed blessing.
BUT anyway these minor points still don't affect the fact that i'm giving this 5 stars :D

One of my favourite Shakespeare plays

Read beautifully, very easy to follow even without the text to hand, a helpful rendition if you're currently studying this play.

Charming, funny, fast-paced, but not overdone

If you could sum up BBC Radio Shakespeare in three words, what would they be?

Rosalind... she was natural, sparkling, sincere, smart. Though her counterpart, Orlando, was understated, which made the beauty of the dialogue between them really shine. Both well cast and well played.

I was sorry when the story ended... I look forward to hearing it again.

Entertaining but not unabridged

This is a well-done production in terms of characterization of Rosalind and Orlando. I was disappointed however that it is not unabridged as is indicated on the Amazon website. This made it difficult for students to listen to as they followed along in their own copy of the play.

My biggest complaint with BBC radio Shakespeare is their modernizing of the bard's songs and I'm not a big fan of their background music either. As You Like It though is tolerable enough in both of these areas, I personally would prefer something more authentic but it is good for what it is. The biggest draw to this production is Helena Bonham Carter who I thought was fabulous, who wouldn't fall in love with her Rosalind. More than any of the other BBC comedies this is one I eagerly look forward to listening to again and again.

Why such terrible singing?

Where does BBC Radio Shakespeare rank among all the audiobooks you’ve listened to so far?

This recording is quite good, and I have a recording of nearly every play of Shakespeare's.

fun but not great for school

heavily edited! not great for studying but very enjoyable if you are reading for fun!

I have to say here and now, that this is a really great dramatization of this play. I say it's sedate, because I've seen it played on stage and the version that I love the most is very dramatic and energetic. So this being the best version of this play I've sampled as an audiobook is nothing to poo-poo away. I'd highly recommend this version of the play to listen to, it was well done!

As always (and I mean always) the BBC Radio Shakespeare knocks another performance right outta the park! I adore these performances, and As You Like It is one of my favorites. Helena Bonham Carter is a superstar, and the entire performance leaves nothing to be desired. If you haven't discovered this performance series, you should!!!

It is hard to imagine a better cast for As You Like It. Helena Bonham Carter captures every shade of Rosalind -- pragmatic, playful, honest, and thoroughly in love -- and the teasing friendship with Natasha Little's Celia is thoroughly believable. The rest of the cast are just as good, I've not heard or seen a performance more sympathetically read.

The one disappointment is that the songs are poorly sung to poor settings, and jar terribly against the beautiful acting.