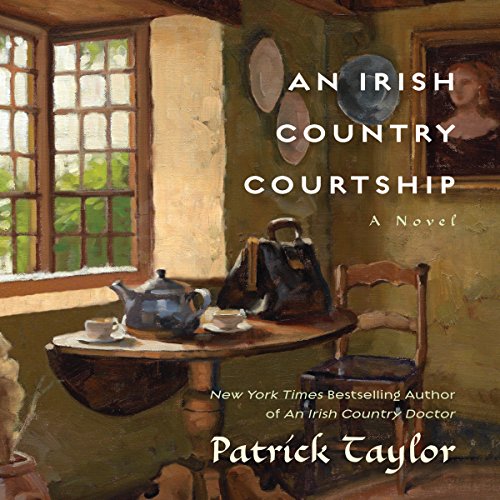 By: Patrick Taylor
Narrated by: John Keating
Try for £0.00

Welcome to the colorful Ulster village of Ballybucklebo, where two doctors work hand in hand to mend the bodies and spirits of the town's diverse and engaging inhabitants. But who is looking after the wounded hearts of the doctors?

After less than a year, young Barry Laverty, M.B., is settling in to the village, with only a few months to go before he becomes a full partner in the practice. He's looking forward to becoming a fixture in the community, until an unexpected romantic reversal gives him second thoughts. Will he truly be happy tending to routine coughs and colds for the rest of his career? After all, even when a more challenging case comes along, like a rare tropical disease, all he can do is pass it on to a qualified specialist or big-city hospital. As much as Barry enjoys the rough and tumble of life in County Down, is running a humble GP's shop all he wants out of life?

Barry's mentor, Doctor Fingal Flahertie O'Reilly, is going through some personal upheavals as well. After mourning his deceased wife for decades, he's finally allowed a new woman into his life. But this budding courtship is not going over well with Kinky Kincaid, the doctors' redoubtable housekeeper, who fears having her position usurped by O'Reilly's new flame. Tact, diplomacy, and a fair amount of blarney may be required to restore peace to the household.

Meanwhile, life goes on in Ballybucklebo, presenting both doctors with plenty of distractions from their own troubles. From a mysterious outbreak at the local school to a complicated swindle involving an unlucky racehorse, the two partners will need all of their combined wit and compassion to put things right again - just in time for their lives to change forever.

What listeners say about An Irish Country Courtship

Again loved it! Have bought my mum the first 7 books, she's now addicted too,... A Feel good read.

Another slice of life from Drs. Lafferty and O'Rielly with the every charming Mrs. Kincaid. This is the 4th in the series and I've loved every single one of them. The Narrater, John Keating, is absolutely perfect with his Irish brogue and his ability to give each character a different voice.

This series is a feel good, enjoyable and lively listen!

I can't wait for the next book in the series.

Patrick Taylor cannot write fast enough for me. I am not Irish but I have enjoyed learning about Ireland, the people of Ireland, the everyday lives of the Irish people and the practice of medicine in Ireland in the 1960s. I always listen to his books at least three times while waiting for the next one to be released. Hurry, Mr. Taylor. We are not getting any younger!

I hope there will be more in the series!

I've read the entire Irish Country series. Firstly, I love John Keating as a reader! His knowledge of Irish accents is awesome, and he has a delight in his voice as he creates voices for each of the characters.

For anyone who may be disappointed by his accents, thinking they are not Irish, please know that the difference between Northern Ireland and the south such as Cork are major. Having spent a fair amount of time in Northern Ireland, which I love, it was a joy to listen to him and think about the people I have met and grown to love.

None of the books is a thriller. Rather, Patrick Taylor is delightful because of the characters in this imaginary village in the 1960's. This was the time when Ireland was just beginning to change and leap forward. Yet, many still had no phones, or still used primitive plumbing and heating. We don't think of a fire as a main heat source, but it still was in many homes in Ireland. Taylor brings it all to life.

If you want a series that will make you smile, and sometimes laugh out loud, then I would recommend this. My husband did not enjoy them as much as I did, but agreed about John Keating's narration. The story is lightweight, but I liked the series because of the things I've mentioned. Sometimes I just want something purely for fun.

By the end of the series, I felt like I really knew Dr. O'Reilly, Kinky Kincade, and Donal along with all the others. Dr. Fingal O'Reilly is probably the most delightful. He is larger than life.

Another thing which I enjoyed was learning how medicine was practiced in the 1960's. The books are a salute to all the hard working GPs out there.

I love this series. They just get better and better. The characters are great and John Keating does a superb job of bringing them to life. This one definitely ends with a question mark guaranteeing a sequel. I can't wait. I can even guess what the title will be, but I won't say it now as it might give too much away.

I have read all of Taylor's books but this is the first on audio book. I wish I had read them all via audio book as Keating's Irish accent and pronunciation of the Irish words made the book so much more enjoyable. I have found this to be a delightful series, the glimpse into the life of a Irish village of the late 1950 early 1960 is interesting. His writing places you into the village I felt as if I was right there as part of the village. Book leaves you feeling good at the end.

I really like the book. the story comes to live in a little town and the people are delightful. it is simple and pure and it make you care about the folks you meet. From the doctors to the people in the town that they care for. it makes you want to live in a little town like that were everyone knows every body and they do what they can for each other. You do get a sense of the county side and the live style of the little town and the surrounding area. I do plan on reading more of the sequel. I want to find out how it fares with the young doctor. Will he find love will he return to the village,and what other plots will they uncover and solve.

Whiney men are not attractive

I really got tired of the poor pitiful me of Dr Laverty. It distracted from the rest of the story.

What made the experience of listening to An Irish Country Courtship the most enjoyable?

I work in Medicine so I enjoyed it very much also went to England this summer.

I very much enjoy listening to each book, learning about Irish daily life in a small village.

Wish I had a better review to offer...

...but the plot is just so puerile and predictable!
The narrator is a favorite, and if you missed him for Sara Baum’s “Spill Simmer Falter Wither” you’re in for a treat! But the material in this case doesn’t work for me...too bad.