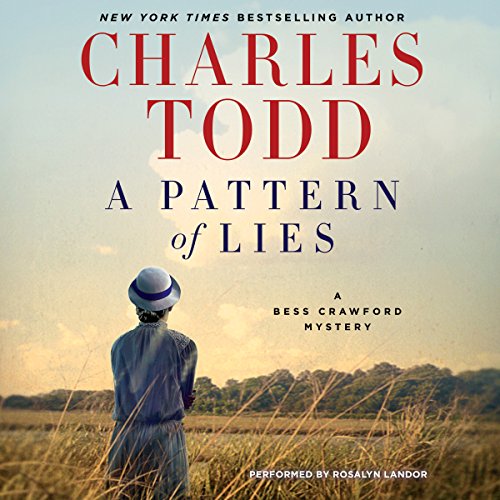 A Pattern of Lies

By: Charles Todd
Narrated by: Rosalyn Landor
Try for £0.00

A horrific explosion at a gunpowder mill sends Bess Crawford to war-torn France to keep a deadly pattern of lies from leading to more deaths, in this compelling and atmospheric mystery from the New York Times best-selling author of A Question of Honor and An Unwilling Accomplice.

An explosion and fire at the Ashton Gunpowder Mill in Kent has killed over a hundred men. It's called an appalling tragedy - until suspicion and rumor raise the specter of murder. While visiting the Ashton family, Bess Crawford finds herself caught up in a venomous show of hostility that doesn't stop with Philip Ashton's arrest. Indeed, someone is out for blood, and the household is all but under siege.

The only known witness to the tragedy is now at the Front in France. Bess is asked to find him. When she does, he refuses to tell her anything that will help the Ashtons. Realizing that he believes the tissue of lies that has nearly destroyed a family, Bess must convince him to tell her what really happened that terrible Sunday morning. But now someone else is also searching for this man.

To end the vicious persecution of the Ashtons, Bess must risk her own life to protect her reluctant witness from a clever killer intent on preventing either of them from ever reaching England.

What listeners say about A Pattern of Lies

Hats off to determined Bess Crawford for digging around and keeping a clear head to get to the bottom of this mystery of why the former owner of a gunpowder factory and his family are being targeted as the scapegoat for the accident in the factory that kills most of the men in this small Kentish village and are the target of so much hate from the villagers. This seemingly impossible task she relentlessly pursues in both Kent and in France from the trenches to questioning the wounded in hospitals there, despite attempts on her life.

The narrator's crisp voice give a very clear idea of Bess Crawford's strength of character, determination and her strong sense of duty to those around her. The narrative also gives vivid descriptions of the filth and squalor of the trenches and what the soldiers had to endure in France during the Great War.

I love Charles Todd books and Bess Crawford is a good character, but there were a few too many lucky "coincidence " here. Bess seemed more like superwoman than a nurse, with Simon miraculously appearing when trouble threatened.

I hate to admit that I was disappointed with this book. The first books in this series were fabulous. Can't stop reading kind of fabulous. Bess was smart and likeable and interesting. The attraction between Bess and Simon was fun to read.

This latest book, and frankly the one before it, is dull. There's no spark anywhere. I hope the Todds are able to capture the essence of the beginning of the Bess series and bring it to their next book - which I will listen to as soon as it's available, by the way.

Love this series and the Inspector Rutledge series. Character development and story are great, twist at the end always fets me.

I loved every part of this story from the familiar voice of the narrator, to the familiar characters and their quirky ways. The story line was interesting and riveting at times keeping my interest all the way through. Until the end. What a thoroughly disappointing, ridiculous, petty, ending.

as always Bess Crawford and Simon Brandon leaves me wanting more
but I love them !!!!!

Great mysteries with a great narrator

Married or Rosalynn Landor is incredible; I don't think there's any voice that she cannot do! The author Charles Todd in beds his mysteries in a time period that is fascinating. As a nurse, I find a heroine irresistible

so many questions over and over and over. i skipped about 6 chapters and still didn't miss anything...except the questions. truly, I love this series which is why I have a high review.

If you could sum up A Pattern of Lies in three words, what would they be?

This isn't a traditional who-done-it really but more a story of intrigue and trying to get to the bottom of a baffling case of someone being wrongly accused of a crime.

What does Rosalyn Landor bring to the story that you wouldn’t experience if you just read the book?

She is a wonderful reader. You honestly wouldn't know that there weren't men and women reading-- she takes on different genders adeptly.

The Formula No Longer Works for Me

I was an early fan of the Bess Crawford novels. But after a while, the formula isn't working for me anymore. I find her nosiness and that she inserts herself into situations where she's clearly unwelcome annoying.

The kookaburra is located in Australia. Not France. Or England. This author needs to do better research.