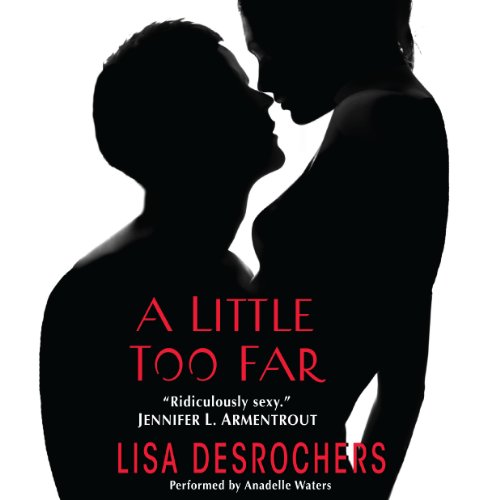 A Little Too Far

By: Lisa Desrochers
Narrated by: Anadelle Waters
Try for £0.00

Have you ever gone just a little too far? Lexie Banks has.

Yep. She just had mind-blowing sex with her stepbrother. In her defense, she was on the rebound, and it's more of a my-dad-happened-to-marry-a-woman-with-a-super-hot-son situation. But still, he's been her best friend and confidant for the better part of the last few years...and is so off limits. It's a good thing she's leaving in two days for a year abroad in Rome.

But even thousands of miles away, Lexie can't seem to escape trouble. Raised Catholic, she goes to confession in hopes of alleviating some of her guilt...and maybe not burning in hell. Instead, she stumbles out of the confessional and right into Alessandro Moretti, a young and very easy-on-the-eyes deacon...only eight months away from becoming a priest. Lexie and Alessandro grow closer, and when Alessandro's signals start changing despite his vow of celibacy, she doesn't know what to think. She's torn between falling in love with the man she shouldn't want and the man she can't have. And she isn't sure how she can live with herself either way.

What listeners say about A Little Too Far

Romantic tension keeps you at the edge

There is nothing better than a novel that keeps the romantic tension throughout. In this love triangle, you can not help but have empathy for everyone involved. At points, you'll be screaming, "no," then later "text him/her," "don't." I liked very much the main character, she was funny as well as kept you involved as she changes and considered.

This was my first novel by Desrochers, and as an incurable romantic -- I give it a thumbs up.

Perfect writing and narration. So heartfelt and sexy. Refreshing story with strong primary and secondary characters.

One of my all time favorite stories

I have to say I love this series so much I read them first and now am listening to them. Great story line and excellent narrator. Great author so can't wait to listen to more.

A BEAUTIFUL BUT BITTER-SWEET LOVE TRIANGLE

Right from Chapter 1 this well-written, easy flowing, emotional, romantic and tender love story had me hooked on all the drama, mental turmoil and decisions that Lexie went through in her journey of self-discovery to finally find her heart's desire. Told entirely from her own POV which was humorous and had some vivid descriptions of her life and her awakening passions for art, teaching, Rome..... and love.

As the Summary states, Lexie found her boyfriend cheating on her with her best friend (which was bad) but then she cried on the shoulder of her step-brother Trent who she shares a very special bond with. Then things get out of hand and they have intense and mind blowing sex (which was very very bad... but very very good?) and, from then on, she can't get Trent out of her mind not even when she goes to Rome two days later to study. However, there she is slowly tempted by the handsome, charming, reformed bad boy, but soon to be ordained, Deacon Alessandro and things go from bad to worse as she's losing the special bond she's always had with Trent whilst fighting her ever growing admiration and attraction for Alessandro.

This is such a sweet, tender, sexy and romantic story of forbidden love and all the heartache that inevitably goes with it as the three main characters all question and fight their desires but Lexie has to eventually decide and, at times, I just wasn't sure who she should or would ultimately turn to, but she made the right and brave choice in the end but I felt so bad for the loser. Friendly messed-up young Heroine, two drool-worthy sexy yet forbidden Heroes, an enjoyable entertaining plot that has other likeable characters in it and a bitter-sweet HEA ending.

Worth a credit? This is book 1 of a trilogy (or series), and I'm eagerly off to listen to book 2 A Little Too Much which shows that YES I thought this New Adult listen very creditworthy.

TANTALIZING & TABOO BUT OH SO GOOD

This book has been sitting in in my wish list for close to a year, then finally I decided it was time to take the plunge into what other readers' had described as a taboo or forbidden love story. I loved it - FANTASTIC, heart gripping, compelling love story and Ok not as taboo as I originally thought. Its worth a shot to read. I really enjoyed this story!

What did you love best about A Little Too Far?

I enjoyed the characters in this book. Keep me engaged throughout the book

This was the first book I've listened to by Anadelle. She has a great voice and understood the character she portrayed

A little too Far was a Hot Fascinating listen :)

In the beginning of the book, Lexie's boyfriend of several years dumps her and she goes running into the arms of her stepbrother and best friend, Trent. Their parents married when they were in their early teens, which slightly removes some of the ick factor. She knows she's loved Trent for a long time, but realizes that love is changing from familial to something more. Days after they do the deed, she's whisked off to Italy for a year of studying abroad.

Let me pause here and stress that Lexie understands it's not socially acceptable to sleep with her stepbrother. She feels guilty, knows it's gross, and is completely weirded out by the whole thing, which is why she's thankful to have a continent separating them both. There's a whole lot of awkward between Trent and Lexie, and distance helps, but while they do talk about it a little before she departs, there's plenty of texting and phone calls to add to the awkwardness, while also making it painfully obvious that there are still unexplored feelings between the two.

Cue Alessandro, the sexy, Italian deacon Lexie meets when she visits a church to confess her sins Lexie isn't a particularly religious person, but she's willing to do just about anything to rid herself of the stepbrother sex guilt.

Lexie and Alessandro's relationship skirts the boundaries of taboo for most of the book, with a lot of harmless flirting that starts getting heavier as the book progresses. Because Alessandro hasn't been ordained (although he has taken his vow of chastity), Lexie feels slightly less horrible about thinking about doing dirty deeds with the deacon. Alessandro is incredibly patient, sweet and encourages Lexie in her studies. He's awesome basically. I don't want to reveal any spoilers about what happens between him and Lexie or Lexie and Trent, but it's somewhat obvious from the start. To complement this Sexy story Anadelle Waters does a great job narrating and i just loved Trent's voice. :)

I would have taken the other path.

What made the experience of listening to A Little Too Far the most enjoyable?

Which character – as performed by Anadelle Waters – was your favorite?

Alessandro. He was soft spoken and witty. Also liked her English friend. She was a hoot.

When Alessandro came to her the day before his final step into the priesthood.

I can tell you I was really disappointed with the out come of this book. I would have chosen the other path for sure. I get her bond with one man but I felt true love with the Second. Great story though. I really didn't want to go to work and just stay home under the covers and finish it.