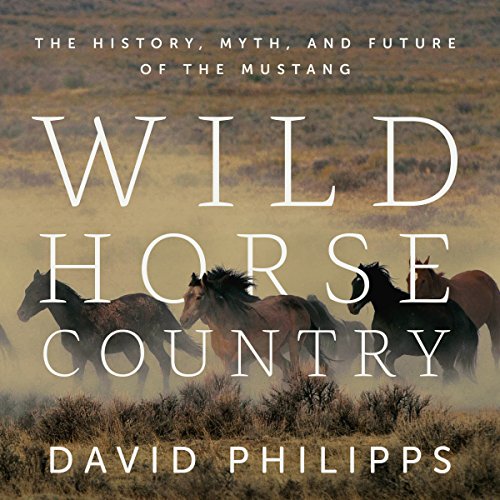 By: David Philipps
Narrated by: David Colacci
Try for £0.00

Wild horses - also known as mustangs - live in a strange twilight. They are deeply American but not native; they are free-born symbols of liberty but tightly managed, thriving yet persecuted. Today, the wild horse is a ward of the state, with tens of thousands held in captivity by the federal government - nearly as many are left in the wild.

In a powerful blend of history and contemporary reporting, New York Times reporter David Philipps traces the rich history of wild horses in America: their introduction by the Spanish conquistadors, their role in the epic battles between Native Americans and settlers, their vital place in American self-mythology. He travels through some of the most remote parts of the American West, known as Wild Horse Country, to investigate the wild horse's current dilemma, caught between the clashing ideals of ranchers, scientists, animal rights activists, slaughterhouse employees, and government officials.

this is great book, well read and engaging throughout. interesting history and facts mixed with stories/legends.

For those of you seeking a book about the modern American Mustang and its current situation, don’t bother with this work. Its author states in the beginning he does not have accurate knowledge of horses, stating that he chose to write about mustangs because they are free. He also states his parents were hippies and he has no respect for authority. I had no problem with this up until he tried to tell his readers that the modern day horse person takes no consideration for their horses aside from individual pieces of equipment. I would gladly invite this man to ANY horse farm of those of my acquaintance to educate him on his ignorance. This book seems to push the agenda of HSUS and PETA. No accuracy or truth, only ignorance and illogical reasoning. Don’t bother wasting your money.

Best story about the endless challenges of the wild horse. Superior investigative reporting by the author.

I love how David gave equal thought to every argument on both sides and closed with a compromising solution. My significant other and I have tried to do our part of adopting to keep the cowboy/mustang partnership alive. I was surprised that there wasn’t more mention of the adoption programs through the Mustang Heritage Foundation such as the Extreme Mustang Makeovers and the TIP program. Before reading this I felt like horses were an evasive species, now I believe they have a place here. The solution offered is one I would love to see gain traction. A must read for anyone involved with wild horses.

Riveting Story with the Literary Power of a Stampe

A well researched, balanced and fair look at the wild horse of the west. A great read.

Some brief language. Great documentary type story. Narrator does a good job. Perfect for this kind of book

A rather depressing book, but I think important. it covers a lot of the controversies from a fairly neutral standpoint. Lots of different problems and solutions are explored. I feel better off knowing more about the issues facing the wild horses.

An essential read for every horse lover, or for anyone who cares about the fate of America's wild mustangs. I learned a lot from this book about the history and current situation of wild horses in America, told as a compelling story.

Great book a wealth of knowledge about the mustangs and how the Government hides the truth. A must read for anyone who loves are nations historical wild mustangs