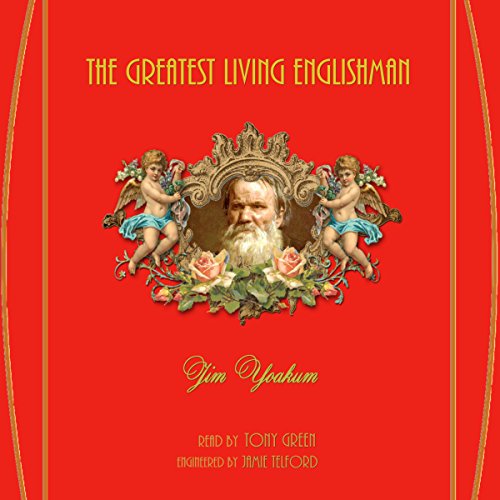 Set in 1919, The Greatest Living Englishman tells the comedic adventures of "England's Worst Poet" Colin Gilfeather Millaney: an egotistical - though loveable - rhymer who is wholly untouched with even the faintest speck of talent. He is so awful that people throw rotten produce at him on the streets. They buy his books, just to throw at him. But that does not stop him from penning his doggerel, or inflicting it upon what he claims is the "misguided" public.

When a letter arrives inviting him to come to New York and tour, reading his "runaway bestselling" book of poetry, he is off like a shot. But, his unlikely rise to fame is due to a clerical error at the US publishing house - it is the work of the budding young poet, Edna St. Vincent Millay, they have published, not Millaney. But it is too late to repair the mistake, as Colin is on his way. Troubles, and hilarity, soon follow. The Greatest Living Englishman satirizes the commodification of the arts, while roasting people who are more than eager for the banquet.
©2012 Jim Yoakum (P)2017 Jim Yoakum

This is a brilliant tale, Jim really gets into the characters and the period and gives us an insight into a chaotic world of wealth,poetry and publishing during WW1. The sound effects bring the story to life I loved them. Tony Green gives a great madcap narration and brings Colin to life big bold and obnoxious

Another Great Book From Jim Yoakum

As someone who has enjoyed several of Jim Yoakum's books, when I was offered a review copy of The Greatest Living Englishman I leapt at the chance to read and review it. One thing that strikes me with Jim Yoakum is that with every book he writes, he attempts to do something new. While many authors rely on convention and patterns, Yoakum makes every effort to produce an original and intriguing piece every time he publishes. The Greatest Living Englishman is no exception to this. Bumbling, pompous, lowbrow Colin Millaney is the quintessential anti-hero thrust into the bosom of high society at the birth of the roaring twenties. Millaney, who possesses all the pride and grandeur of Oscar Wilde with none of the talent to back it up, is much more analogous to a modern day grumbling Jeremiah in his common unfiltered view of the world. Yoakum mixes fictional symbolic characters with actual historic figures in this short story that is sure to please. The audio version is a fully immersive experience, with an excellent narrator, and a consistent ambiance that bring the scenes to life. My biggest criticism would be the long pauses between chapters. Some went on for so long that I thought my iPod had frozen. If you can get past that, the story itself is a definite winner.

Something a little different

What made the experience of listening to The Greatest Living Englishman the most enjoyable?

It was something out of the ordinary. Actually, it was quite ordinary so much so that it wasn't.

It was a view of life that many wouldn't care to know, yet here we are.

If you could rename The Greatest Living Englishman, what would you call it?

Life of an ordinary bastard

Which character – as performed by Tony Green – was your favorite?

Of course the Maestro

Who would be best to play the maestro in a movie? It woulld have to be someone very serious like Di Nero or someone like that

Keep calm and carry on.

I enjoyed this book the character development was done very well by the author. The narrator did a good job in bringing this story to life with different voices and well chosen sound effects. This book is not too long, and a great way to pass the time.

Funny book and I like the sound effects on it

This was an interesting and entertaining book. It was pretty short, but I thought the author did a good job of developing his characters. I thought it was quite funny and there were a few parts of the book where I laughed out loud. I listened to the Audible audio edition narrated by Tony Green. I liked his narration a lot, and I liked the added sound effects. The production quality, however, could use some improvement. The pauses between chapters were a bit too long. I thought several times that my player had stopped, but it hadn't. Also, the background noises needed a bit of adjusting so that it "fades in" better at the beginning of the chapters. Overall, a fun and funny book. I would definitely check out more works by this author.

I think what killed this book for me was the reader. His accent and voices were so uninteresting.

I think I would've removed the background score from the book, after the initial 10-15 minutes; or might've used to sparsely. At its current state, I found the background score to be too distracting. It sets the mood for the period initially, but once that is done, it should've faded into background. But it kept going.

I'm conflicted about how to rate the narration. On one hand, the narrator was trying to do his best, considering the period the book is set in. On the other hand, that itself made it slightly unpleasant to me. I guess I can't blame the narrator for that. I should've expected this based on the period and the protagonist being a "poet".

I voluntarily received this copy for free from the author / narrator / publisher and am leaving an unbiased review.