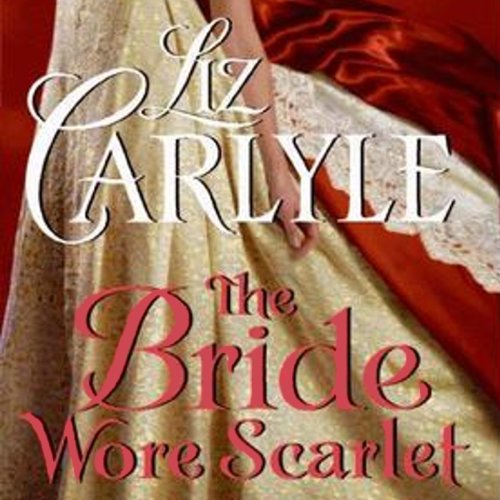 By: Liz Carlyle
Narrated by: Angele Masters
Try for £0.00

New York Times and USA Today bestselling author Liz Carlyle ushers listeners once again inside the mysterious St James Club, where passion and secrets simmer behind the elegant façade of Victorian London. In her deliciously intriguing The Bride Wore Scarlet, Carlyle does historical romance absolutely right—as a determined young beauty’s desire to gain entrance into the secret all-male society places her under the powerfully sensuous spell of the group’s ruthless and enigmatic leader. Fans of Amanda Quick and Gaelen Foley are going to love this Bride!

What listeners say about The Bride Wore Scarlet

Liz Carlyle has written an HR series with a paranormal spin, and it's right up my alley. I don't think I missed anything important by not reading the 1st book, and this one could be a stand alone if you don't want to buy more. (It's $7 with the combined Whispersync.)

The story begins with an elderly Italian grandmother reading the tarot cards for her granddaughter. Anais doesn't really believe in tarot cards, but she believes in her grandmother's gift. Time and again, the same cards appear in her readings, indicating an important destiny for Anais -- one that she must one day fulfill.

To prepare, Anais is sent to train for her roll as a Guardian for the Fraternitas Aureae Crucis -- an ancient fraternity with members called Guardians, who seek out and protect gifted children and train them to control their special abilities.

The Saint James Club is the London base for Fraternitas Aureae Crucis, and it is there that Anais goes to apply for membership once her extensive training is complete. There is only one problem: They don't allow women. Fortunately, there is a case that requires a woman's participation, and Anais just happens to be perfect for the job.

What follows is a lovely slo-burn romance between a couple of people who really don't want to get involved with each other. Him because his gift makes it hard to trust people, and her because of her 'destiny.' They are in Brussels, undercover as husband and wife, to save the life of a young girl and her mother, who have both fallen under the power of an evil man who wants to use the child's gift for his own gain.

There is an undercover investigation, some scary atmospherics, a rescue, and an escape by sea that is exciting and well written -- but it's what happens between Anais and Geoff (the leader and founder of the St James Club, and her partner in the investigation) -- that really powers the book.

Turns out, there's lots of downtime when you're on a stakeout, and sexy time ensues.

I really enjoyed the book, mainly because the characters, romance, delicious sex scenes, and the action, were so good that I was able to let a few dangling plot points slide. If you're going to Brussels with Anais and Geoff, leave your need for perfectly resolved plot points at home. (Fortunately, it's easy to parse them out for yourself, or just ignore them altogether.)

While not Liz Carlyle's very best, this is pretty good, and highly entertaining. Like one Goodreads reviewer says, these books are like potato chips!

Angele Masters gives a great performance as usual, and her rendering of men's voices feels like a magic trick, it's that good. If she has a weakness, it is that almost all of her attempts at doing accents end up sounding kind of Baltic.

I liked it! Loved the Heroine!

Wow I enjoyed this second book in the FAC series much more than the first book. I really loved the heroine Anais, she was strong, funny and very witty, took zero crap from anyone and spoke her mind. The hero was really good too.

The story line and plot was good, a little bit of kidnapping, and sword fighting. The chemistry between the hero and heroine was hot and steamy, plenty of sex but not too much. There was quite a bit of dialogue too. I love dialogue in the books I read.

I like the "Gift" story in these books, it's different but not too out there to be considered paranormal. (I do read paranormal books too, and like them)

As for the narrator she did a fantastic job. I did speed her up to 1.25 speed but that is just my preference, she did fine at regular speed as well. She made the men sound like men and gave everyone their own distinct voice.