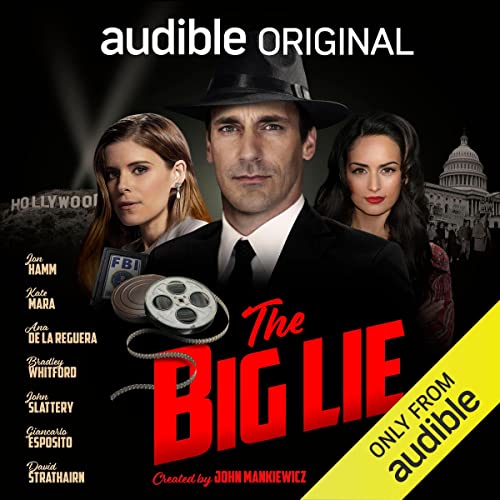 What listeners say about The Big Lie

A play both enjoyable and important in it's content about the McCarthy era of political oppression with the House of Unamerican activities. The acting is excellent, the characters well developed. Looking forward to more episodes...

Brilliant cast and excellent story. Jon Hamm is so easy to listen to. Based on real life incidents made into a brilliant work of fiction.

What a performance! Finished listening to this beauty in a couple of sittings as it was so good and enjoyable to listen too!
I’d love it if a sequel was to happen - not giving anything away though!

Cinematically Entertaining For The Imagination!

I loved all the actors' portrayal of their characters and the complexity of the characters too. The sound effects were spot on and really added to the impact of the actors' great work too! They did a great job of transporting the listener to the scenes, often making me forget I wasn't actually watching but rather listening. It was as if I were truly seeing the scenes play out before my eyes as I took in all the content. Great job on all fronts. I hope there is a sequel to the series! 😁

Interesting story, and a wonderful performance by a very talented cast. Such moving performances by Jon Hamm and Kate Mara; one could almost believe that this was a married couple. I also like the small touches when Jon Hamm‘s character wants to find out the score in a St. Louis Cardinals baseball game over the radio, Or when characters use the telephone, the listener can hear the sound of a electro mechanical rotary dial (To the younger listeners, there was a time when there were no cell phones, no Internet, Or even push buttons dialing). Give this audiobook a listen, you will not be disappointed.

As a USAF veteran I raised my right hand almost 20 yrs ago to fight for our country. When I say for our country I mean for ALL people from ALL countries who want to live free. People who have truth to tell of their stuggles and successes. NOT for the politicians (aka Republicans/democrats) & what they want others to believe. We ALL have the right to tell our truths!!

Should be a movie. Very well done and well acted. More of this please Audible!!

Perfect title to fit our current Big Lie. So apt.

I loved it and Kate Mara is so perfect in everything that she does. Magnificent work.

very important documentation of a very sad part of American history, well executed and with a very dignified adaptation

One Of The Best Audible Originals

Would not mind seeing The Big Lie as a mini series or movie. it would only work by casting the same actors.