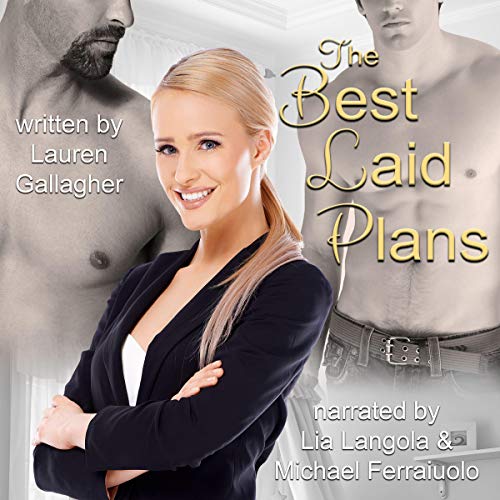 It's a foolproof strategy...until the emotional balance shifts.

After yet another adoption falls through, Gabe is ready to give up, and Shahid isn't far behind him. Apparently, being a gay couple - half of which is Muslim - is just one strike too many for the powers that be. When their friend Kendra offers to carry their baby for them, both men balk at first but gradually warm to the idea. Especially Gabe, whose bisexuality is open to the chemistry among the three of them.

But as the heat flares between Gabe and Kendra, Shahid's long-suppressed insecurities bubble to the surface. Then some unexpected news catches the trio off guard and derails their plans - and now one heart could be left out in the cold.

Warning: Authors subsist on the tears of listeners. Please recycle your hankies by wringing out and reusing. We'd hate to be the cause of a worldwide shortage of tissues.

I got this book, knowing that the small portion of the cover I could see on the phone looked good and the narrator is someone I really like. but when I actually downloaded the book I realized it was more than I bargained for. I didn't think I would like it, but it's actually every entertaining, and well written. so if you can get over the same sex scenes, you will really enjoy it! I did! it was a pleasant surprise!

Much more than expected!

This book defies quite a few clichés. First is the impression of it being an MMF ménage, where usually you have three people each falling for the other two (which is also the reason why I usually prefer MMF over MFM). Well, if you read the blurb, you’ll realize that this might not be the case with this one – which was as much of a breath of fresh air as it was making me skeptical. Also, which absolutely surprised me and had me falling for the story, there is the fact that while this book might be spiked with lots of hot and carnal sex as to be expected with a ménage, it has so much substance, so much depth about real life problems (which in all honesty shouldn’t be a problem at all nowadays, though much of the society thinks otherwise), that it becomes an emotional rollercoaster.

A happily married gay couple who yearns to have their own children and a good female friend who wants to put an end to all the denials they already had to endure over the years whenever they tried to adopt – denial not even over the most obvious reason, no, but because of their mixed-religion marriage. Kendra’s offer is huge: to be the surrogate mother for their kid – only she wants to receive the old-fashioned way with the bisexual Gabe. Trouble is inevitable, seeing that Shahid, who is gay, will be somewhat left out in the whole process…

Before you ask: No, this story is not at all about cheating! These three are actually quite mature people to talk things out, communicate instead of always jump to conclusions on their own – well, at least most of the time. Of course they have obstacles to overcome, fears to fight, and they learn things about one another and themselves they never thought were possible.

The narration. Lia Langola. To be frank, she is what drew me to this story by Lauren Gallagher, who was new to me, in the first place. I just love her beautiful sultry voice and the way she breathes lives into the characters. She is about the only female narrator who can do male voices I actually feel attracted to – which is saying something! Michael Ferraiuolo was new to me, but I liked his deeper, smooth voice instantly. He had to do the narrative from both male perspectives, which he did wonderfully overall, but there were times it was hard to tell which voice we were actually listening to.

All in all, I loved listening to this story that blindsided me a time or two and thoroughly recommend it.

Awesome! I've volunteered to review this book for United Indie Book Blog. I had the audio version of this book. This story is about Kendra, Gabe and Shahid. This story is very well written. My emotions was all over the place with this one, it was like I was on a rollcoaster. Gabe and Shahid are so sexy, and so loving. Boy, when Kendra came into the picture with these two, WOW! I am in love with Michael Ferraiuolo and Lia Langola's audio book performances. I love the combination from these two narrators. You could hear every emotions that Gabe, Shahid and Kendra was feeling. You NEED to get this book or the audio version of it. You WILL NOT be disappointed in it. Keep up the amazing work! I can't wait to read/listen to more from them.

Gabe and Shahid have been together for years, but continue to hit roadblocks trying to adopt a baby. Since Gabe is bi-sexual they decide to try the old fashion way with their friend Kendra...we all know this is destined for trouble!

I enjoyed this story because I could feel the emotions right along with the three main characters. It was great that it was told in all three points of view and I could really get in their heads. The male narrator did not use enough distinction at times for me to know which guy’s POV we were supposed to be listening to sometimes.

This is the first book by me from this author, but I wouldn’t put reading another out of the question. She really pulled me into this story and I’m so glad I listened to it. These characters definitely faced some challenges, but I loved how they worked through all of it.

My Thoughts on The Best Laid Plans

The Best Laid Plans was an extremely well written, exceptionally narrated story. The three main characters all had great personality and there was so much I liked about them in their own different ways. But their interactions and communication with each other was probably my favorite. I just love couples that actually talk to each other. Who actually know each other. And who learn new things about themselves and each other as they grow together.

The two narrators for this story were fantastic. I've loved Lia Langola for a while now. It's gotten to the point where I will at least try just about any romance she narrates because I know I'm going to love listening to her. Michael Ferraiuolo isn't someone I have heard much by him, but I was very impressed with him in this one. He had two male voices to perform and I felt he did a great job giving them two distinct sounds.

This was a must listen to audiobook, and the story itself was so good I would definitely call it a must read as well.

Another great book by Lauren Gallagher and fantastic performance by Michael Ferraiuolo.

I am in love with Michael Ferraiuolo's audio book performances. It doesn't hurt that the books he's been performing are also written by fantastic authors, but his voice…! Someone told this author that he would be wonderful reading her grocery list so she asked him to do it and it was dreamy. 😊

The Best Laid Plans is the first audio book I've listened to that has both a female and male narrator, and it's the first book I've listened to by Lia Langola. The story is told with each of the three characters doing rotating chapters told from their point of view. Since it's an MMF menage story Lia does one chapter for every two that Michael does. I have a personal preference for listening to a male voice but it made complete sense for the Kendra chapters to be read by a female and she did them quite well.

Please read the synopsis/blurb; it's concise and accurate. I've read a lot of menage stories – several of them MMF titles – but I think this might be the first one where one of the men is not at all attracted to women. It was interesting to read how Shahid changed his perspective after he and Gabe accept Kendra's offer to help them have a child. He still identifies as gay but he definitely enjoys doing things with Kendra and Gabe that he never imagined doing with a woman.

This was such a good story! I could feel the emotions the characters were going through thanks to the talented voice performers and the excellent writing. I don't consider that anything that happened in the story is cheating but if you're at all sensitive to stories that might push those boundaries you might not like this one. Everything that happens is consensual but it still causes relationship difficulties at some point. It all works out OK and I loved the epilogue that takes place a year after the main story ends. Like the rest of this book we get to hear from all three characters in the epilogue.

True Friends will do anything for each other

When I first started listening to this book, I thought it would be a light and fun story. But as the book continued, I realized that it is more true to life than I expected. It is an emotional rollercoaster. There are potholes in the road that these three follow. But as friends, they manage around those potholes, and become stronger. Like any relationship, theirs must overcome heartbreak before they can find happiness.

You know how it seems that thr that guys are always the hottest? Well imagine getting to sleep with them anyway!! Kendra gets to fulfill a wish of women everywhere, when she offers to carry Gabe's and Shahid's baby.

Lia Langola and Michael Ferraiuolo are a wonderful duet narrating team. Each one was able to bring out different characteristics of Kendra, Gabe and Shahid that truly enhanced the reading experience. Ms Langola has a sultry voice that captures your attention. Mr Ferraiuolo has a deeper, yet soft voice that truly portrays the male characters as I would have imagined them. This book is a must read!

The Best Laid Plans is emotional, heartfelt, and absolutely scorching hot. It's a rare thing to find a story like this one with so much chemistry between the characters, but Lauren Gallagher pulls it off perfectly. Gabe and Kendra are great together from the start, but that spark seemed to be missing between Kendra and Shahid in the beginning. That said, watching that spark flicker and grow slowly as the story progressed was one of my favorite things about this romance. And make no mistake, this is a romance. Everything may start with an arrangement, but little by little, this trio builds a bond of trust, friendship, and finally, love. The story does have its share of angst, but it's not overdone, yet certainly pulls at the heartstrings. Between the author's superb writing and the narrator's equally wonderful delivery, this one's a must listen. It's a fan yourself sexy story of hope lost and found, friendship, faith, and love.

I liked the story line and,the characters. I didn't care for the narrators using different voices to be different people. To me, I'm would have been happy hearing them in their own voices. Story was a bit predictable, but not enough so to where I didn't want to listen to it .