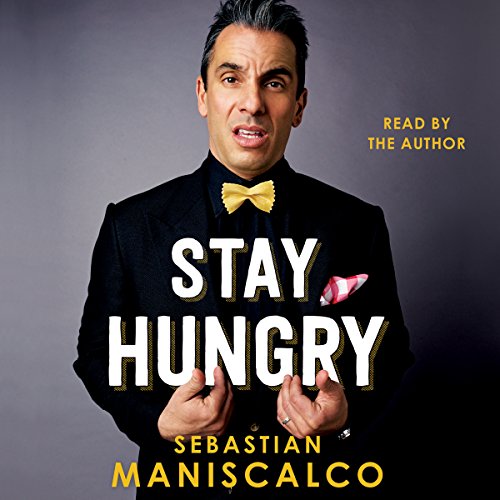 At 24, Sebastian Maniscalco arrived in LA with a suitcase and saved up minimum wages. He knew no one and nothing about standup comedy, but he was determined to go for it anyway.

At 44, he's on the Forbes' list of highest earning comedians, sells out arenas, and has starred in four hit comedy specials including Why Would You Do That? on Showtime.

Stay Hungry tells the story of the 20 years in between. On the way from clueless rube to standup superstar, Seb was booed off stages; survived on tips and stolen food; got advice from mentors Andrew Dice Clay, Vince Vaughn, Tony Danza, and Jerry Seinfeld; fell in love; and stayed true to his Italian-immigrant roots. The one code that always kept him going: stay hungry, keep focused, never give up, and one day, you'll make it.

What listeners say about Stay Hungry

I loved this book. he's my favourite comedian and it's great to hear his story. it's very funny and the story is inspiring.

Great book with some good laughs

I honestly thought the book would be more jokes and less serious, but that wasn't the case. I really enjoyed it, and I think a lot of people can identify with most of Sebastian's stories. Kept my interest throughout the entire book. Well done!

Thought it was exceptional. Good stories and examples of great values that can take you a long way if you let it happen.

One of the best I’ve listened to

I was a fan before the book but now it’s solid. Great book I’ve suggested my oldest son take a listen.

Written and read in his relaxed, comedic tone. If you like Sebastian's comedy, you'll enjoy the book. If you don't like his comedy, I have to wonder what's wrong with you.

I wasn't sure what to expect as far as content, but it was entertaining and inspiring to hear his journey into/around the world of comedy. Lots of good family stories, too.

This book has been a pleasant distraction from daily stress. It made me laugh and on occasions cry a bit. It's raw and real; I wouldn't have expected anything less!

Sebastian's story is interesting and RELATABLE!
His narration is so funny and personable, it's almost like he is THE invited friend at the traditional, Italian Christmas Eve Table.
Although his experiences are obviously unique, his writing and narration tell his story in such a way that you will find yourself laughing at your own memories.
He is able to bring out all of the human emotions in each of us, primarily happiness!

Absolutely the best. Sebastian is hilarious so real and simply tells the story of being the perpetual outsider who NEVER gives up. His perseverance is so inspiring.

His Italian roots and essence brought me right back to my Jersey childhood and filled me with deep joy.

His love and closeness of family is so warming.

I listened non-stop. Just loved it. Can’t wait for his next one about being a father!!

Entertainment from the heart

What a joy listening to Sebastian tell his inspiring life story to success. And I thought I knew him- Wow. Now he has endeared me to appreciate his comedy even more than I thought was possible!

I get it you got a great wife enough already.....
great story I would recommend this book

Biscuit! Great Book. No mention of the Podcast or Pete? You're better than that kid!

What a great ride, I enjoyed this book the entire way through!! I wish only wonderful things for you and your family Sebastian!!!