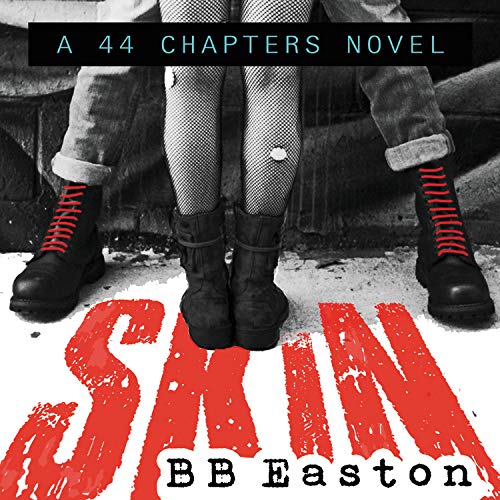 Get swept up in all the gritty, wild details of a roller-coaster love story with the ultimate bad boy - from the award-winning, best-selling author of 44 Chapters About 4 Men.

Because BB Easton had so much fun writing her best-selling, award-winning memoir, she decided to give each of her four men his own steamy stand-alone. Skin is Knight's book - a gritty, taboo, forbidden love story overflowing with '90s nostalgia, dark humor, and heart-wrenching teenage angst. It is based on a true story.

In 1997, Ronald "Knight" McKnight was the meanest, most misunderstood boy at Peach State High School...perhaps on the entire planet. Knight hated everyone, except for me, BB - the perky, quirky punk chick with the locker next to his.

I, on the other hand, liked everybody...except for Knight. I was scared to death of him, actually. All I wanted was to marry Prince Eric-lookalike and king of the Peach State High punk scene Lance Hightower and have a million of his babies.

Unfortunately for me, Knight was even better at getting his way than I was, and once he got under my skin, my life would never be the same.

What listeners say about Skin


I actually stumble across BB Easton books by accident and I’m so glad I did! She’s an amazing author!! I immediately started 44 chapters books not knowing what I was in for and WOW! Just WOW! My emotions were everywhere like I was riding a roller coaster... I laughed out loud, I ugly cried and I even said “what the actual f**k” several times! I have no words for her writing style it’s that awesome! You have to experience it for yourself...

I wanted to wait on giving my review until I finished all 4 books. Let me just say that I absolutely loved all of them! Hands-Down 5 stars, but If I had to pick one book that I LOVED the most, It would be SKIN, just because I fell in love with Knight. Sorry Ken, just so you know I did love your dry sense of humor in your book and laughed numerous times. I’m so happy that BB chose you to spend the rest of her life with, but something about Knight called to me. Maybe it’s the mom in me responding on how damaged and lost Knight was and wished that he could’ve been fixed.

So let’s begin with Knight in SKIN. He had my heart right from the beginning. He was so broken beyond repair that I wanted to help him myself. His love for animals was amazing. He had this nurturing side of him that was beautiful.. Knight had that nurturing side for BB in the beginning. Plus Knight was only person that noticed that BB had demons she was dealing with too and the only person he opened up to. I believe Knight loved BB in his own way. It just wasn’t enough to over come his own demons.
Next we have Harley in SPEED. He was your typical bad boy douche bag, but I like him. He made me laughing along with his brother Davidson and made me dislike him because his was selfish. Again Knight broke my heart 💔in this book with his letters.
Then there was Hans in STAR that had a sweet and carefree personality that would do anything for BB, but Hans had his own demons to deal with that finally ruined his relationship. He lived more in a fairytale then he did in the real world. Meanwhile Knight was falling deeper into his own madness and again my heart broke for him but also my heart broke for BB, because we start to see what years of Knights craziness was doing to BB.
Finally we get to meet sarcastic-non emotional Ken in SUIT. This book had me laughing the most out of all of them..Ken’s non-existing personality wasn’t just funny as sh*t, but he was overall a good men with a heart of gold with issues he had over come. BB couldn’t have pick a better person to spend her life with.

Anyhow, I would definitely recommend reading all 4 books! You will not be disappointed. I also would recommend listening to the audiobooks because Ramona Master did a fabulous job narrating!

I'm happy I found this series!

I've read and listened to the book based on the Netflix show, Sex/Life. but I had no idea there was a four-book series. Skin goes even deeper into the relationship between Knight and BB, not to mention the demons that haunt them. The side characters are more developed as we get to know BB and her friends. I truly enjoyed this installment and wish I read it before the condensed version. So. Good! I highly recommend reading or listening to the audiobook. You'll be on pins and needles almost the entire time!

Originally listened to this on romance package however I loved it so much I had to buy the series for my collection. Can’t wait for the series on Netflix.

Wow! I freaking loved this. So much so that in the middle of listening, I searched out the rest of the books in the series and read the summaries of each. I was ready to buy them all and download them as soon as I finished #1. But after the roller coaster ride you just put me through, ima just hop off that coaster for a little bit and maybe re-read something a little less emotionally draining from my library. I’ll be back tho. And I mean all of this as a sincere compliment, honest! Life is just crazy enough in the world right now...I need a little light and fluffy before I dive back into your world. Thanks for that!