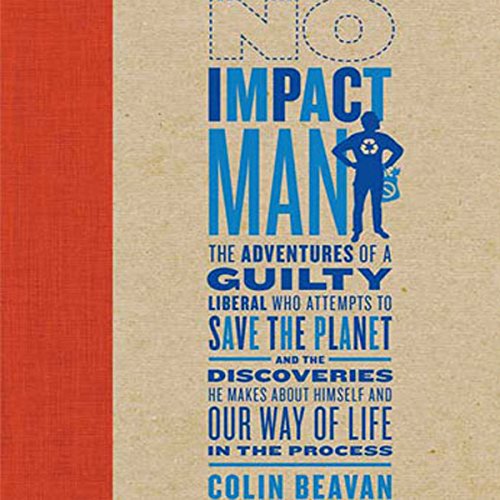 No Impact Man is the story of Colin Beavan's attempt to become as environmentally conscious as possible over the course of a year. Going beyond swapping plastic bags for cloth, he quickly realizes that saving the planet is not as simple as eschewing his toddler's disposable diapers.

Read by Beavan, this performance can, at times, be stilted, but it lends some great, unexpected credibility to the memoir. Hearing about a personal experience straight from the author makes it feel less like reading a book, and more like hearing an interesting story from a friend. In addition, emotions flow freely and honestly, coming directly from Beavan's experience, re-living the events for the listener. Bringing what can be a heavy, possibly heated topic down to a personal level, there's no lecturing about what one should or shouldn't do for the environment; this is simply one man's experience.

Over the course of the story, Beavan, dubbing himself "No Impact Man", examines his life and that of his wife and child, coming up with countless ways they can change their ways and become more socially conscious. Recognizing that it's easy to stand in judgment of those not making similar efforts, Beavan goes out of his way to be self-deprecating and fully aware that he's taking an extreme approach. As the project goes on and he makes more dramatic sacrifices (such as turning off the power to his apartment), his viewpoint evolves from mere curiosity to an almost frantic idea that no matter what he does, it will never be enough to change the fate of the world.

What starts out as an attempt to live a greener life evolves, leading Beavan to explore much larger issues in his life and how going down this path effects not just him, but those around him. As his project winds down, he finds himself at a crossroads, in conflict with himself, the environment, and where to go from here. After coming so far and doing so much, how does he continue to live his life as he had, knowing what he's capable of doing for the environment? Can he live with himself if he immediately returns to his old ways? Will making select concessions, like taking the elevator to the 25th floor instead of the stairs, make him a hypocrite, or worse, undo all the good intentions the year has given him? What kind of person is he now?

Although the book ends, Beavan's thought-provoking quest to better both himself and the planet continues, leaving listeners to ponder their own role in this world and what steps might be possible to take. Lesley Grossman

A guilty liberal finally snaps, swears off plastic, goes organic, becomes a bicycle nut, turns off his power, and generally becomes a tree-hugging lunatic who tries to save the polar bears and the rest of the planet from environmental catastrophe while dragging his baby daughter and Prada-wearing, Four Seasons-loving wife along for the ride. And that's just the beginning.

Bill McKibben meets Bill Bryson in this seriously engaging look at one armchair liberal's decision to put his money where his mouth is and go off the grid for one year - while still living in New York City - and see if it's possible to make no net impact on the environment. In other words, no trash, no toxins in the water, no elevators, no subway, no products in packaging, no air-conditioning, no television....

What would it be like to try to live a no-impact lifestyle? Is it possible? Could it catch on? Is living this way more fun or less fun? More satisfying or less satisfying? Harder or easier? Is it worthwhile or senseless? Are we all doomed or can our culture reduce the barriers to sustainable living so it becomes as easy as falling off a log?

These are the questions at the heart of this whole mad endeavor, via which Colin Beavan hopes to explain to the rest of us how we can realistically live a more "eco-effective" and by turns more content life in an age of inconvenient truths.

What listeners say about No Impact Man

This book honestly inspired me to not only to continue in my zero waste pursuit, but to let others know to try and start the domino effect!
well read, some laughs, some tears. well rounded book!

Feeling uninspired and powerless in the climate crisis?

Christmas gets everyone down - you’ve spent a lot, eaten a lot and now with a focus on the environment you know you’ve damaged a lot too. Listen to this to get reinspired with making positive change. I’m never a fan of people doing impressions of children’s voices but aside from that it’s an easy listen.

totally loved this book; great reading by the author. although it is a few years old now it is just as relevant and important as ever.

Would you listen to No Impact Man again? Why?

No. It's a message that's clearly worth hearing once, but there would be little additional value or excitement to a second time.

What other book might you compare No Impact Man to and why?

It's a genre of its own.

The author ran an experiment which many of would conceptually like to pursue, but few of us ever would. Living the experiment vicariously delivers a lot of the learning, without the pain.

If you want a book that will make you think (and then rethink the things you were thinking...), this is a great choice. I loved how the focus was not only on environmental impact, but also about simplifying our lives and remembering what life is really all about (ie the people we love). The author's reading voice is a bit distracting (almost 'valley girlish'!) at times, but as someone else said, a pretty good reading for a first-timer.
Overall very funny, informative, and engaging!

It may change your life

A very interesting tale that, while I can't guarantee that it will change your life, it will make you reconsider our current wasteful ways. The narration is amazingly good for an amateur. My only complaint is that it can be a little "preachy" at times and there's still that nagging question about toilet paper . . .

You ever wonder sometimes if your life is missing something. This man and his family have the answers to how to have a more loving and connective life through living with less impact on the world.
Everyone should read this and practice this way of life.

boring to be honest

I couldn't get into the story telling. I so appreciate his message, which is how we try to live at home, but I couldn't get past chapter 4. sorry

Valuable lessons about climate change, sustainability, and the fragility of our species and the planet shared in a hugely relatable and relevant manner. This book should be required reading in all high schools, colleges, universities, and for all of our elected officials.

This got me thinking and acting in my life to try cut out what I can to help the planet. It’s the simple things that matter most and together we can all make an impact.

I literally have nothing bad to say about this book. Its well written, inspiring, more informative and creative than any other zero waste type book, funny, and filled with real information (including stats). And the author does a great job narrating. Please buy this.