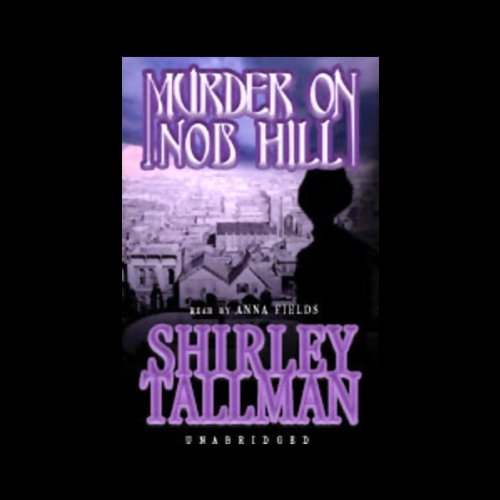 By: Shirley Tallman
Narrated by: Anna Fields
Try for £0.00

This book is one of a new series featuring Sarah Woolson, an intelligent, outspoken young attorney in San Francisco in 1889.

Sarah Woolson has always dreamed of becoming a lawyer. The trouble is that, in 1880, everyone believes a woman belongs in the home, married and taking care of babies. Using her brains and a little bit of subterfuge, Sarah somehow manages to finagle her way into one of the city's most prestigious law firms, becoming an associate attorney and acquiring her very first client, a lovely young society matron accused of brutally stabbing to death her wealthy but abusive husband. Sarah's sure of her client's innocence, but with the discovery of her secret lover, it becomes nearly impossible to prove.

When four more victims fall prey to the killer's knife, Sarah fears she's bitten off more than she can chew. Bucking her boorish employer, the judicial system, and the very people who should have been on her side, Sarah finds herself embroiled in shady legal maneuvers, a daring Chinatown raid, a secret and very scandalous sex club, and the most powerful and dangerous tong lord in the city's Chinese District.

What listeners say about Murder on Nob Hill

This is a delightful book. While I usually like more contemporary settings for my mysteries, having this book set in a "more civilized" time was really enjoyable. Sarah Woolson is a woman before her time, aspiring to a man's job in a man's world. It's a reminder that there was a time when "women's rights" were a novelty. Thankfully, the author avoided stereotypically portraying the men as stupid and the women as strong and all knowing. Indeed, the characters are believable and well distinguished. The plot is nicely paced and nothing important is given away before its time. Best of all, Anna Fields is in top form. She reads this with great enthusiasm and sounds like she really enjoyed herself. Her characterizations are phenomenal!

Originally, I bought this book just to listen to Anna Fields voice again. She always made ANYthing she narrated an delightful story.
I was not disappointed.
This book is well written and the narration is spot on.
The characters are smart, the mystery solution is not obvious and the characters have to think outside the constraints of societal norms. Lots of interesting historical detail.
Great listen

I have to admit, I only bought this book because Anna Fields was the narrator. I fell in love with her voice listening to the Susan Elizabeth Phillips books and have missed hearing her too-soon-silenced voice. I spotted this one and found not only did Anna Fields do her usual superb reading, but I discovered an author that I would continue to listen to. I am now getting the second in the series and feel sure that it will be just as wonderful as this one. I loved the characters and the fact that it was nearly impossible to figure out the culprit until the end....Well Done!!!

What did you love best about Murder on Nob Hill?

A really well written story, with brilliant narration. I've been searching for the sequel in audiobook as it isn't available from Audible here in Australia. In the end I had to borrow the rest in book format from the library. Still a great read but not the same experience as listening to it.

What other book might you compare Murder on Nob Hill to and why?

Have you listened to any of Anna Fields’s other performances before? How does this one compare?

I've listened to many of Anna Fields' performances, and this is what led me to discover this series. It's always interesting when you've heard the same narrator read multiple books as you being to recognise voices from a character in a different book appearing in a totally unrelated one. An excellent narrator, it is so sad that she is no longer with us.

Who was the most memorable character of Murder on Nob Hill and why?

Sarah, who is the main character is certainly the most memorable.

I listened to the first 3 books and have just finished reading the fourth (which I hope will be available on Audible soon). If you like historical fiction/ mysteries you will enjoy these books.
Unlike a previous reviewer I find the main character Sarah W. interesting and full of pluck. These stories are set in the 1880's 40 years before women won the right to vote and therefore, I find Shirley Tallman's male characters and their sexism and racism to be perfectly believable and Sarah's frustration with her society and the men who control it to be reasonable. The author has several important male characters who are neither sexist nor racist so she does not generalize about all men. It is clear that the author has done her research on the role of women in the 1880's and in the legal profession. It is hard to believe but some law schools such as Harvard did not admit women until the 1950's.
The mysteries are good but I enjoy the books because of the characters. I think if you enjoy Elizabeth Peters you would also enjoy this series. I hope there will be many more books in this series and that the love story will become even more central and lead to further growth for the character of Sarah.
Anna Fields was a great narrator and will be missed.

Love the main character and the descriptions of San Francisco in the late 19th Century. But having a major plot point be a sex club located in a church basement -- how did that location get authorized, and what happens during Sunday School? -- strained the suspension of my disbelief. But I'm willing to put this down as debut-novel-itis and try the next one.

Would you recommend Murder on Nob Hill to your friends? Why or why not?

Sure, it was recommended to me by a friend

Would you listen to another book narrated by Anna Fields?

Could you see Murder on Nob Hill being made into a movie or a TV series? Who should the stars be?

Maybe but not really on the big screen...perhaps made for TV movie

What a treat. I love good dialog and great language. Add to that a well constructed mystery and you've got some great entertainment. Then there's Anna Fields, the narrator. Ms. Fields is talented at creating the characters voices, both male and female. I've found myself searching for books where she is the reader. I'm now listening to the Russian Hill Murders by Tallman. The only bad news is that the next Sara Woolson hasn't been written yet.

This book had been well recommended, and I was looking forward to it. Unfortunately, it has been difficult to hang in there with it. I'm about half finished, and would drop it if my "I paid for it so I'll finish it" mentality would let me. The protagonist is preachy and self-righteous. I can't decide if her total lack of charm is due to the writing or the narration, but Sarah Woolsen is an arrogant man-hating prig. And actually, only a couple women receive the Sarah Woolsen Seal of Approval. The rest are too weak, colorless, and submissive, in her estimation. Most of he men, so far, are portrayed as boorish or boring. (Honestly, men aren't really all that bad! Some of them are downright wonderful!!) Yes, this was before suffrage, etc., but does it have to be hammered home over and over again in such a forthright "up on a soap-box fashion"? Constant interjections of moral/social pronouncements are artificlal, reeking of "holier-than-thou" attitude.
If you are a listener with an agenda similar to Sarah Woolsen's you'll love this book. It will give you lots of chances to stand up, cheer, reach for the nearest meat cleaver, and poise yourself to implant it in the head of the first man who walks by...poor unfortunate soul. If you are seeking a "cozy" mystery with a charming quality, look elsewhere.
The Narration is labored. The narrator tries hard to do all the men's voices, but honestly, a more straightforward style would be preferable. After a little while, the male voices all sound the same. Instead of adding to the story, it gets to be a huge distraction. And the narrator's inflections make Sarah that much more unlikeable.
I realize my review is not politically correct, but I would rather hear a great story than be PC. It is not my desire to be a downer, but Sarah started it first!
Only 4 more hours to go...Sigh

I love this series but her accents are not great

I really enjoy this series, I read the second one already, but the narration is a little rough. Her Scottish accent in particular, which wouldn't matter so much if the character wasn't a main character, was too forced and didn't sound quite right. Other than that it was enjoyable.