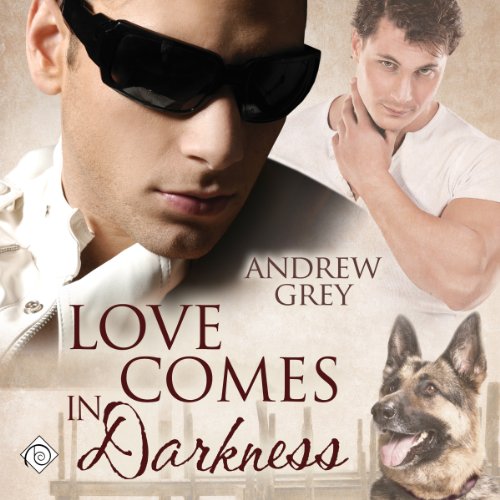 Howard Justinian has always had to fight for his freedom. Because he was born blind, everyone is always trying to shelter him, but he's determined to live his life on his own terms.

When an argument with his boyfriend over that hard-won self-reliance leaves Howard stranded by the side of the road, assistance arrives in the form of Gordy Jarrett. Gordy is a missionary's son, so helping others is second nature - and he does it in such an unassuming manner that Howard can't say no.

Life is barely back on track when Howard receives shocking news: his sister died, leaving him her daughter to care for. Howard now faces his greatest challenge yet: for Sophia's safety, he'll need to accept help, but will he learn to accept it from Gordy, the one man who will not curb his independence?

What listeners say about Love Comes in Darkness

I liked this when I read it, and have enjoyed the audio. Max does a good job. However I've never noticed before how many "asked" and "Saids" there are in it. Eventually it became a bit of a nuisance. Overall however you can't go wrong with an Andrew Grey.

Story is good. Like characters. Reader does not fit story and doesn't do the characters justice. Prefer a different reader.

I liked this. I listened to it over a few days on the to-and-fro work trek. The narrator felt a bit off sometimes, which was a minor issue, but to judge the story itself, it was light and sweet.

When Howard - who is blind - is left abandoned at the side of the road by his boyfriend after a fight, a stranger pulls up and helps him while he waits for the friends he has called to come pick him up. This stranger - Gordy - has an immediate attraction to Howard, and the two of them have a chance to reconnect a short while later. But dating a blind man is a no easy task, Howard knows, and having just come off a relationship with someone very controlling has been hard - Howard values what independence he has managed to create for himself.

If that had been the sole source of stress in the story - these two men navigating the give-and-take issues made all the more difficult with the inclusion of Howard's blindness, then it would likely have fallen a little short. But Love Comes in Darkness goes further, and throws a massive new event directly into the life of Howard, and shakes everything to the core. Being independent is no longer the primary concern for Howard, and everything else might have to go if he's to do the right thing by those he loves.

Well told, and I have realized since that this is actually book two, and that some of the supporting characters were the main pair in book one. I'll be adding it to my queue.

I thought this was a really nice story but, frankly, the narrator was completely wrong for this genre. The emotion was completely lost, and I felt the parts that were supposed to be sexy sounded like I was being read to in kindergarten. I think the narrator would be great for children or some other kind of narration, but not so much with anything too emotional or sexy.