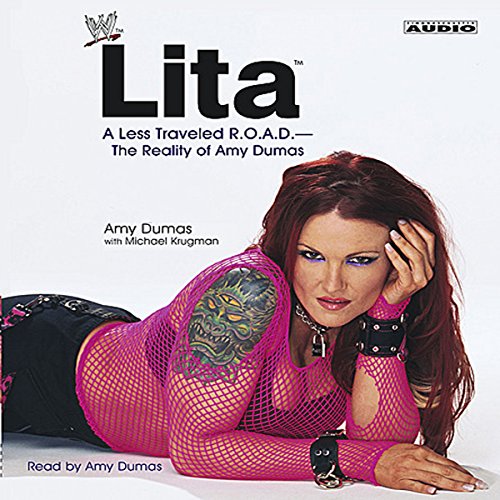 Taking unexpected risks, daring to do what no one has done before, that's the reality of Amy Dumas, the remarkable woman behind WWE's Lita. Amy found trainers who saw her determination and her heart. Among them were the two local North Carolina stars who had just signed with WWE, Matt and Jeff Hardy. Amy formed an instant bond with the dynamic Hardy Boyz, whose spectacular style and high-flying bravado inspired her own bold in-ring style.

It wasn't long before Amy, now Lita, joined Matt and Jeff in WWE, and the three friends became international sensations as Team Extreme. Lita proved to be a true pioneer in women's wrestling, daring to get in the ring with the boys and never backing down. She's competed with Triple H, Stone Cold Steve Austin and The Rock. It took a broken neck, suffered on the set of a television series, to stop her...but only temporarily. Lita: A Less Traveled R.O.A.D-The Reality of Amy Dumas is the stirring tale of one young woman's amazing journey to the top of the wild, wonderful world of WWE.

love it, love her, she's the greatest!

love you lita, you're my favorite of all time. awesome book! thank you so much