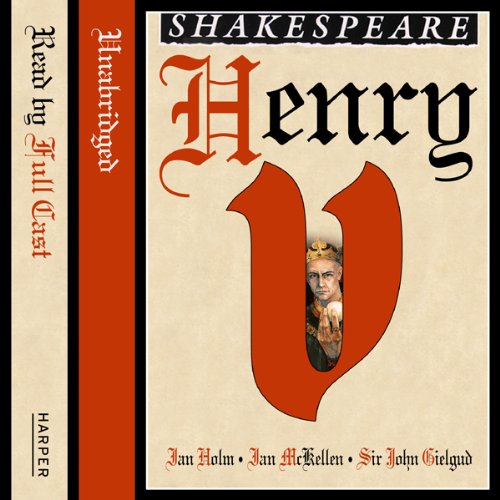 By: William Shakespeare
Narrated by: Ian Holm
Try for £0.00

Henry V is a history play by William Shakespeare, believed to have been written in around 1599. Its full titles are The Chronicle History of Henry the Fifth (in the First Quarto text) and The Life of Henry the Fifth (in the First Folio text). It tells the story of King Henry V of England, focusing on events immediately before and after the Battle of Agincourt (1415) during the Hundred Years' War.

The play is the final part of a tetralogy, preceded by Richard II, Henry IV, Part 1, and Henry IV, Part 2. The original audiences would thus have already been familiar with the title character, which was depicted in the Henry IV plays as a wild, undisciplined lad known as "Prince Hal". In Henry V, the young prince has become a mature man and embarks on an attempted conquest of France.

What listeners say about Henry V

Good cast but some production issues

I won't bother reviewing Shakespeare's sublime Henry V. This production has an excellent cast, who give good performances and made it fairly easy to tell who was speaking (harder then it sounds when its all dialogue and you can't see them). There are some issues with volume. At times I had to turn it up to hear what was being said, only to be deafened by the next line!

Fantastic performance of Henry V with an all star cast. Well worth listening to again.