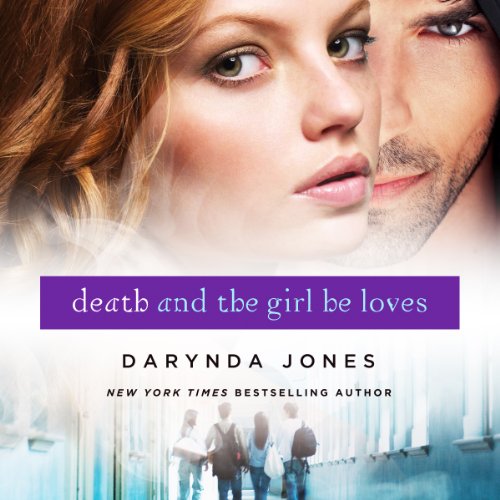 Death and the Girl He Loves

By: Darynda Jones
Narrated by: Lorelei King
Try for £0.00

The fate of the world is not something a girl wants on her shoulders, and that is especially true for Lorelei McAlister. Unfortunately for her, that is exactly where the world's fate has decided to take up residence. Lorelei has seen firsthand the horrors that lie beneath our everyday world. And those horrors are getting her friends killed. Because of this, she agrees to leave the sanctity of her hometown and is sent to a different world entirely: a boarding school.

But even here she is being watched. Someone knows what she is. What she carries inside her soul. And on top of that she's seeing visions. This is nothing new for Lorelei. But these visions are something more: death, destruction, and the end of the world. Lorelei must face the fact that there are people who want her dead, and no matter where she goes, no matter how far she runs, the lives of her friends and family are in mortal peril. Lucky for her, her friends and family include the handsome Angel of Death, a fiercely protective half-angel, and a ragtag group of loyal supporters who aren't afraid to get a little dirty in the name of fighting pure evil.

What listeners say about Death and the Girl He Loves

This is such an interesting supernatural story involving Lorelei and the angel of death looking after her and yes he falls in love with her but it's not a world wind romance. The title suggests their love for each other is the major issue along with saving the world. When it's all about saving the world and just a touch of romance. But the writing as always is funny and clever just what you would expect from D Jones. And Lorelei King is once again amazing. A true gem.

Best of the three, awesome ending

What made the experience of listening to Death and the Girl He Loves the most enjoyable?

I love listening to Lorelei King - she is a wonderful reader and gives distinct personalities to all of her characters.

What other book might you compare Death and the Girl He Loves to and why?

I jumped into this series because I loved Darynda's Charley Davidson series. This is not quite as wonderful as Charley's story, but it was VERY good in its own right.

What does Lorelei King bring to the story that you wouldn’t experience if you just read the book?

She gives heart and depth and humor to each of the characters. She weaves a wonderful story, like being read to at bedtime. She's a terrific reader.

This finale to the series was well worth the read. I loved the twist at the end - it reminded me of the Twilight finale. I loved the journey of Lorelei as she goes away to boarding school and makes such great friends that one of the girls accompanies her back to her hometown and is crucial to the success or failure of the world's future. I also enjoyed the fact that the depth of Lorelei's friendships defied the fickle finger of fate and proved that no matter what, they were meant to be together.

Jump into this series, you will not be disappointed. Also, seek out Lorelei King as a reader, she's wonderful.

The book its self was good but I feel like there was a rush to finish it and be done with it. It was like she decided that she was tired of writing the book and just wanted to end it. She could have put more time into the story to end it properly. The narrator was great I really like lorelei king she brings excitement to the story. All in all an ok book but nothing special.

Darynda Jones is really good and fun author, even though her books talk about the end of the world and end of everyone, still you keep on laughing while reading these books. She is a fantastic author and I am a big fan of her work.

Death and the Girl He Loves started in a new school with new kids, during this book nothing was slow, I didn't get bored at all. It was an event after the other.. And its ending was a new one, you wouldn't expect this ending and that was great, its always boring when you figure out how a book will end.

Lorelei King is a fantastic narrator as usual, and she had done a great job narrating this trilogy, I hope that she will keep on narrating future work of Darynda Jones.

I'm sad that this trilogy has ended, but this means another series could come now from Darynda Jones, whatever it is, i can't wait for it.

loved this book and this series! Have listened to several times and have enjoyed every time.

What ending could be worse than Lorelei waking up to find it had all been a dream? This ending. I have thought that this series was kind of meh but I am a big fan of Lorelei King and was intrigued by the premise of the books enough to keep at this. Big mistake. I thought Lorelei was a whiner the first two books and she just gets worse. Every other thought in her head is how she knows she can't stop what's coming and how she'd give anything to not be the prophet. It's one big pity party. She is worse than Bella in Twilight as far as being an anti heroine and sucking it up goes. At least Bella found her big girl pants in the end. Lorelei does not. Lorelei King is a great narrator but it was still hard to listen to. If I hadn't known it was the last in the series I would've given up and stopped listening, but I was hoping Jones would create an amazing ending as she is prone to do. Nope. Pity party, cop out ending. Ugh.

I fell in love with the characters like I do with all darynda's books. I could listen to them forever! The ending was unexpected and very lovely done.

I really liked the story line of this book. I listened to the Charlie Davidson series and this is a PG version of that. The biggest problem I had with listening to this is the main character. I know she's suppose to be a angsty teenager but she came off more whiny than anything. That's the only complaint I have for it though.

Another great series by Darynda Jones and narrated by Lorelei King. I can't wait for the next series.

loved this series and the reading. Both made this an enjoyable experience to listen to!!