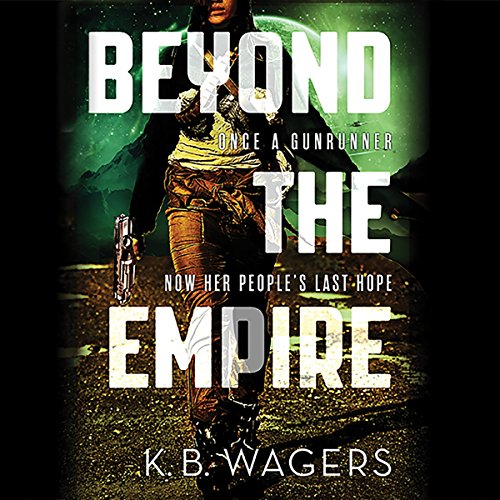 The adrenaline-fueled, explosive conclusion to the Indranan War trilogy by K. B. Wagers.

Gunrunner-turned-empress Hail Bristol was dragged back to her home planet to take her rightful place in the palace. Her sisters and parents have been murdered, and the Indranan Empire is reeling from both treasonous plots and foreign invasion.

Now, on the run from enemies on all fronts, Hail prepares to fight a full-scale war for her throne and her people, even as she struggles with the immense weight of the legacy thrust upon her. With the aid of a motley crew of allies old and new, she must return home to face off with the same powerful enemies who killed her family and aim to destroy everything and everyone she loves. Untangling a legacy of lies and restoring peace to Indrana will require an empress' wrath and a gunrunner's justice.

What listeners say about Beyond the Empire

I love this series and cannot wait to start the next one. very well written and read.

I have enjoyed the whole series, though less than her most recent stand alone novel.

Great writing, characters, and world building and the narrator adds to the perfection. While this concludes the Indranan War series, you'll be happy to know the story continues in the Farian War series. I've read the series this far once and listened twice. It gets better each time.

Truly enjoyed all three of these. Good to have strong female heroines for which to cheer.