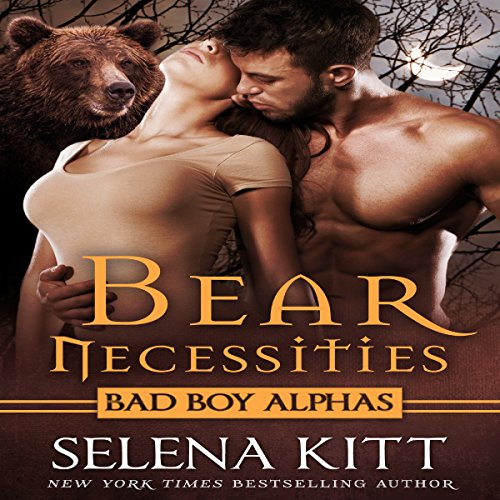 The world has moved on, but Ivy just can't. Besides, she has everything she needs on her sustainable-living wooded homestead, and no desire to brave this grim new world.

Until the day a massive bear chases her into an isolated cabin and she discovers she's not alone.

With a giant bear prowling outside and a gruff, bearded, half-naked savage inside, Ivy finds herself cornered. The man, who calls himself Caleb, says he'll take her home, but she doesn't trust him, his offer, or herself with this giant, bronzed, mountain of a man.

Shifter by nature, drifter by choice, Caleb is uniquely designed to survive in this dark, new hell-on-earth, where the rule of law has been replaced by brute strength.

His scars may be deep but his secrets are deeper, and until he meets feisty, sinfully curvy Ivy one fateful afternoon, he's not sure there's much left worth surviving for.

Finding himself unable to resist the tempting, scrumptious morsel who lands on his doorstep, he realizes she's the one he's been craving, and she's more than worth fighting for.

Caleb is determined to keep her safe from everything dark and dangerous outside. But can he save Ivy from herself?

(This is a stand-alone, no cliffhanger, with an HEA!)

short and to the point

Interesting concept for a short story. I wish there were a bit more but this gets the job done

This is a great short shifter read! Caled and Ivy are so perfect its almost sickening lol! But the way he protects her from the vicious Vaughn is everything you could want in a shifter story. The surprising twist at the end is great too! Definitely recommend reading this story, totally worth it!

This was a nice short book. The story overall was okay, the narration was good, the music they continued to play the Whole. dang. book was AWFUL. I was this close to stopping because of it.

I wish there was more to come. Excellent narration, storyline and steamy bits. Wonderful detail in describing each scene; it unfolded like a movie in my mind.

At the beginning of every chapter there is music in th background and it kinda irritates me . But overall the story was good.

Jazzy Transition Music Has to GO!

I liked the concept of the story, and the narration was great. But please remove the chapter transition music is in blatant discord with the story. it's really ruining the mood of the story!

Please lose the pauses and music between the chapters. It is very disruptive to the story flow.

I enjoyed this book very much. I don't usually spend my credits on such a book less than 10 hours. This book was only almost 3 hours, but I liked the story, I liked the narrator's performance and overall thought it was really good.

Nice short, thought the story could be more developed but overall it’s a good book for a quick read.