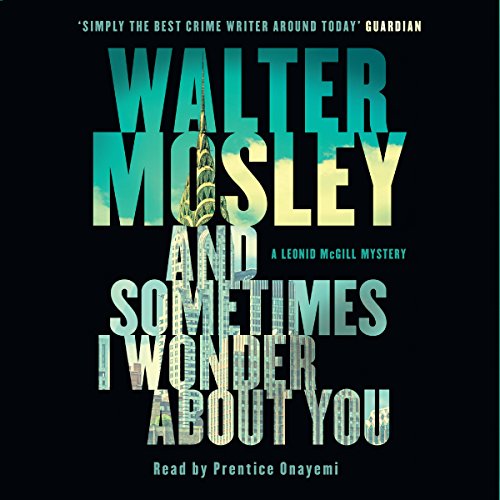 And Sometimes I Wonder About You

By: Walter Mosley
Narrated by: Prentice Onayemi
Try for £0.00

In New York, if you have a problem no one else can solve, you call Leonid McGill. Ex-boxer, hard drinker, in a business that trades in cash and favours, McGill's an old-school PI working a city that's got fancy all around him.

When McGill is approached by a small-time office manager, he declines the case. He has better things to do than track down the man's long-lost cousin, who is about to inherit millions. But then McGill's office is broken into, and his potential client is found dead.

Soon McGill finds himself drawn into the underbelly of an establishment family and a Pandora's box of secrets and lies.Taking you from the moneyed haunts of uptown to the shady corners of downtown, Mosley is the Chandler of Obama's America and one of the finest crime writers in the world.

What listeners say about And Sometimes I Wonder About You

Another recommended read from this series.

Another great addition to this series a definite five star story which jacks up the interest right up to the very last word.

Just another day at the office....

Would you listen to And Sometimes I Wonder About You again? Why?

Probably not but I will certainly look forward to the next Leonid McGill.

I did more or less with few breaks

Sometimes when we were kids and got presents that were not quite the right present, we might have felt annoyed, cranky, or riotous.. For a few tracks I felt mopish because I wanted Easy and Mouse and cars and Southern California. However my disappointment lasted only a few chapters. The story started simmering and then boiling for me quite quickly when a variety of seemingly unconnected characters came together and I thought okay I'll hang around for the ending. I was not disappointed. The character of Hush was well drawn. Some of the supporting acts esp Hiram Stent were memorable for the right reasons. The depressed wife, the receptionist, the leggy mistresses did border on the unbelievable and were a bit tedious. The prodigal father was an interesting idea

Walter Mosley is one of the best writers of the detective genre. Some great dialogue, and if nothing else in a short passage nails the importance of fiction.

Mosley is up to his usual excellent standards in this novel with the ever more world weary ex boxer working another set of cases.

The reader however was a revelation, excellent throughout at nailing the tone and immersing you in the story. I will certainly be looking to see what else Prentice has done.

Would you consider the audio edition of And Sometimes I Wonder About You to be better than the print version?

this is a great crime noire walter mosley at his best ...complex characters with the lead character leonid always brooding and having a inner conscience

brilliant voice !! get him to do more books his voice brought the book to life

No i was savouring every moment..i didn't want it to end

Another great read from Walter Mosley. Leonid McGill is as smooth as ever in his roles as father, lover, agent and killer. Mr Mosley is a fabulous author and story teller. A small point that I miss in the Leonid McGill series as compared to Easy Rawlins is the historical perspectives Mr Mosley regularly included.