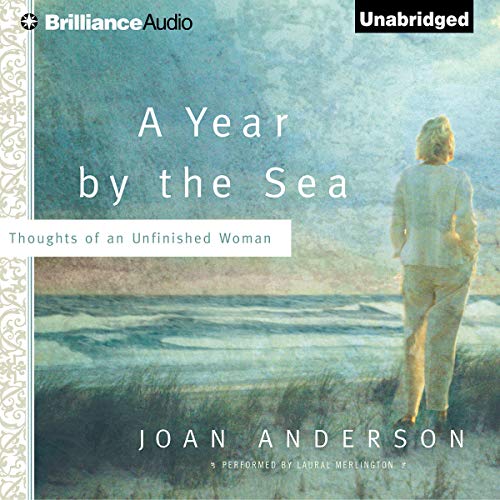 A Year by the Sea

By: Joan Anderson
Narrated by: Laural Merlington
Try for £0.00

Life is a work in progress, as ever-changing as a sandy shoreline along the beach. During the years Joan Anderson was a loving wife and supportive mother, she had slowly and unconsciously replaced her own dreams with the needs of her family. With her sons grown, however, she realized that the family no longer centered on the home she provided, and her relationship with her husband had become stagnant. Like many women in her situation, Joan realized that she had neglected to nurture herself and, worse, to envision fulfilling goals for her future.

As her husband received a wonderful job opportunity out-of-state, it seemed that the best part of her own life was finished. Shocking both of them, she refused to follow him to his new job and decided to retreat to a family cottage on Cape Cod. At first casting about for direction, Joan soon began to take pleasure in her surroundings and call on resources she didn’t realize she had. Over the course of a year, she gradually discovered that her life as an “unfinished woman” was full of possibilities.

Out of that magical, difficult, transformative year came A Year by the Sea, a record of her experiences and a treasury of wisdom for readers. This year of self-discovery brought about extraordinary changes in the author’s life. The steps that Joan took to revitalize herself and rediscover her potential have helped thousands of woman reveal and release untapped resources within themselves.

What listeners say about A Year by the Sea

Free too be a woman of my own making.

I long to be brave enough to take chances. This book gives me the courage to return to my days of youthful adventure and overcome the fear that has come about from life's mistakes. I feel free to be a woman of my own making and help my wonderful husband of 40 years find retirement an adventure, too.

Lovely story of strength and independence!

Honestly this book took me over a year to open after rave reviews from a dear friend. I wrote my own story in my head of a woman escaping for a year at the expense of her husband, to find herself. That was so far from the truth and I was pleasantly surprised!
A beautifully written journey of self expression and discovery partnered with a determination to be independent. I love how she releases her pride to experience a greater depth.
My favorite part was the end when you find she is not the only one on a journey to self discovery. I would absolutely recommend this book to anyone. Hopefully, a few young couples will read this and save themselves years of anguish before feeling at home alone and together.

What an Amazing Read

This book was recommended by a trusted friend who had insight into my current season of my life. What insight provided for women of my generation and what we are taught to do and to be. The amazing lesson of the importance of self in a well lived life and a healthy marriage is so valuable to me and other women of my generation who find themselves at such a critical juncture in their relationships. Thank you.

It was intriguing to delve into ones own physic and find answers so profound. Delightful.

Nice personal story but from the perspective of upper middle class

So that might distract you, but the general gist of her story is affirming even if you are not upper middle class. It would be better if she took that specifically into account and addressed how other women might achieve a similar experience without having a summer cabin to retreat to. The parts on finding self and letting children go when they are grown resonate.

A Year By the Sea

This book was well written, and I enjoyed the woman’s journey overall, but felt that as she rediscovered herself there was a bit of whining and overthinking going on which got tiresome. I suppose though that as we rediscover ourselves in later life, that whining is a real part of the journey. I will say that the author offered up fabulous quotes from other authors that I have followed up on and found intriguing! All in all an enjoyable read. Definitely one for discussion among a book club!

What a paradigm shifting read. All I want to vecome in one beautiful short book.

When I started the book and Joan was describing her husband I totally thought she was talking about my husband. The book was amazing and I found a lot of guidance from her year. I would love to have met her while I was walking the beach last week. I always feel like I have come home when I cross the bridge on to the Cape. A year on my own taking and healing my soul would be scary but it is something I wish for.

My mother and I listened to the book and then she read the book we both absolutely loved this book excellent details makes you feel like you were there. We already bought her other books. Enjoy

I love this story and the narrator was perfect! I didn't want it to end.