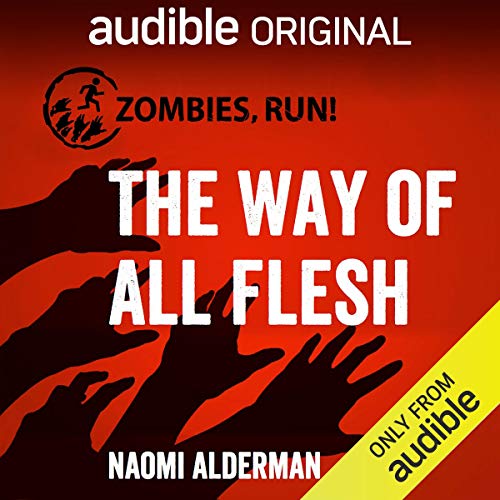 Zombies, Run!: The Way of All Flesh

What listeners say about Zombies, Run!: The Way of All Flesh

I Should Have Listened to Nigel

I didn't believe that Audible could release something quite as bad as Nigel described in his review. To me the opening 30 seconds were the highlight . . . sounded atmospheric and clearly the production values were going to be high . . .

Not long after I was wishing it was over, hoping that the zombies would win, and quickly!

I'm a big fan of the genre but this . . . I just can't find anything positive to say.

It maybe free, but don’t bother

An Agatha Christie who-dunnit and ‘The Walking Dead’ audio-drama fusion. Sounds intriguing, but can’t think anything positive to say except am glad it was less than 2 hours long.

The poor acting, scripts and plot produced a story that lacked emotion and atmosphere. I did listen to all six episodes hoping for a few small exciting twists, but even the grand unveiling of the murderer became tiresome in the final episode.

Good fun and a enjoyable diversion.

To be honest, I listened to the first 5 minutes and gave up. Except later, I was bored and looking for something a little bit different. I listened to all 6 episodes in one session and was genuinely sad to have reached the end. Not for everybody I admit, but I actually enjoyed this and will look with avid interest at other Naomi Alderman offerings. Go on, give it a go!

Updating the classic murder mystery genre against a backdrop of the zombie apocalypse. Good fun.

Well written and performed.
Excellent murder mystery story with the added pacing of a zombie horde closing in.
Hopefully we'll find out what happens to the characters soon.
So much more I want to know about these people and if/how they survive the apocalypse.
Please make a sequel soon

If you want a zombie survival story, look elsewhere.
If you want an indepth murder mystery which will have you puzzling everything out, you might find something here, but it's far from the best.

What it does do very well however is prevent short episodic listening which is compelling enough to make you want to hear the next episode, and simple enough you can probably figure out a few clues even while distracted.
Excellent to keep you entertained while walking the dog.

It's a comedy/drama not a horror

I read the poor reviews and wasn't sure if it was worth listening to but I gave it a go anyway; I'm glad I did. If you're hoping for a horror story you'll be disappointed. There are zombies but they're not what the story is about. Equally, yes, there is a murder but this is not Poirot. It's an interesting story grounded in an unusual setting (the zombies) with a firmly 'tongue in cheek' approach (the acting, which isn't supposed to be Oscar winning) and a few gags along the way. Give it a chance: if you don't like it you can always turn it off.

I've since learnt it is relayed to the running/fitness app Zombies Run. I guess if you've used it you'd know that but, if not, that's where the background comes from.

A fun couple of hours with a zombie backdrop.
There has been criticism of the acting, but if you go into this with a "found footage" of young adults chatting then you'll have a better experience.

There was a hint of a possible sequel and I hope there is as I'm sure there must be something fishy in the lab ;)

I thought this book was really good as one of my first free listens . the only thing is it has left me wanting more :))

Pedestrian rather than Running Zombies

This is a rather poor quality production of an average story featuring some truly dreadful acting. Based on performance, the lady playing Jodie Marsh, should have been fed to the zombies first just to rid the group of her awful delivery. None of the cast are great but the blind detective Chris, gets a shout out for sounding the least like a High School drama student.
The story relies on the, rather overused, concept of a group of strangers brought together in one location who then fall prey to a murderer in their midst. The plot twists and turns and holds some suspense as the listener tries to work out "who dunnit", but we get there long before the cast and this is definitely a four part series stretched into 6 episodes.
The series is free and therefore, perhaps, I shouldn't be too damning but it really does feel like a GCSE drama project:(

Wow, I didn't think I'd care much but the plot really grasped me & wouldn't let go so that I listened to all 6 in a row. I hope that there will be more as I want to know what's so special about the cuff, what that company was truly up, & cannot say anymore without giving way things

One cannot review what they cannot understand

Understand may not be totally accurate. I know the language but the speaker needs to use the urgency of the moment to convey what’s going on. I get the urgency and terror but have a difficult time connecting the dots.
I find myself saying, slow down.
Sorry, it may be me but I find this too difficult to listen to.

I loved it. The characters were unique. The script seemed like every characters lines were written by different people. It felt like a group written narrative. well done for sure and I would love to hear more of this.

This book has already been written before

The book is called dead mourning by Anthony giangregorio. They are trapped in a zoo instead, surrounded by zombies with a serial killer trapped inside. It's like the TV series dead set, which Netflix did a remake of last year.

Surprised and delighted by the "Columbo" styling of Chris amidst a zombie horde, the implications being that there is no authority to answer to anymore. A bit of existentialism in the statement "death follows everyone, sometimes literally". Overall an intriguing story, and love the accents. 😄

Pretty good but too short

Too Short but Good and Need More

Just another small bit to go with your Zombie Run 🧟‍♂️ 🧟‍♂️
It's short only 6 chapters but it is good and worth it. Now hoping for more.

I really enjoyed this

It had me very curious for the rest from the start. I hope there's more coming!