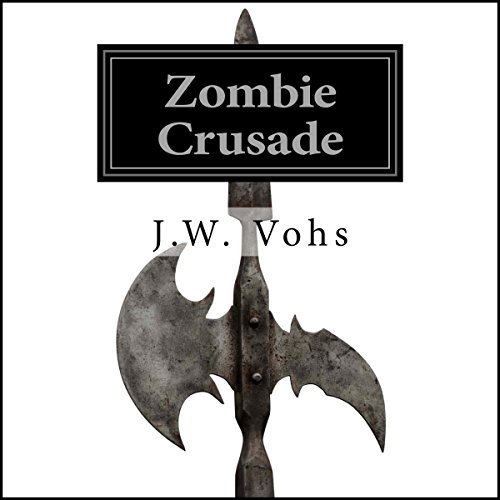 Former ranger Jack Smith watched an Army bio-warfare experiment go horribly wrong in an Afghan village in 2001, escaping only after he turned to a makeshift mace and bayonet to destroy the skulls of the infected creatures that bullets to the chest could not stop. With the traumatic experience seared into his mind, he earned his PhD, in ancient history and began developing medieval weapons-making skills after he left the service.

When the virus broke free from the Hindu-Kush Mountains a decade later and rapidly spread across the globe, Jack knew how to fight the monsters created by the infection: 21st-century technology combined with deadly medieval tactics and weaponry. Jack and his former squad mates lead a resistance against a zombie apocalypse in a crusade to ensure humanity's survival.

Avoiding the mistakes of the Genre

I would like rather have liked to read the book, the worst thing with this book (that I still enjoyed) is the narration of the author. Man - dont use falsetto when reading the lines of the women. That's just wrong!! Also, I, like som many others, buy audiobooks so I can listen on the commute or when falling asleep - So I wear headphones - SO PLEASE DONT SHOUT - and then talk normal and then - SHOUT AGAIN! - It friggin blows my eardrums!!Hey Mr Wohs, I have confidence in you! Its a good book and except for the above you narrate well - please do better next time with this. Pleeeeease!!! I want to listen to your next story.

Would you be willing to try another one of J.W. Vohs’s performances?

Nope. Not reading it for sentimental reasons. Just want to escape reality into the great challenge. And no greater challenge is known to mankind but the zombie apocalypse!

What I like about this book is that I think I could make similar decision as the main character if I was faced with the same choices - and the results play out as one of the many alternatives I could agree could actually happen. If the plot is good - like in this case - it 'does not make the book predictable. It makes it believable and thereby more exciting.
Its also really good that the author does not try to create tension by making people do super-super-stupid things. I mean... who does not hate the character that always does the most stupid thing possible every time they appear in the plot?!... or unbelieveably bad fortune intervene to create excitement??!!
- that is also just so predictable and boring in this genre... Thanks for not falling in this trap.

This is an overall great book. The author indulges a bit over the top some times in his obsessions with halberds but if that doesn't bother you it is very well done. He has a few inaccuracies with military life which is weird because he claims to be a vet, but they're super minor in the grand scheme of things.

Continuous disaster of a novel and audiobook

Not only was the content garbage, but the narration is straight up amateur. Not recommended.

I like any zombie story that comes along but couldn't finish this with the horrible narration and predictable plot.

The narration is HORRIBLE

The story is fantastic, but do to the awful narration I struggled to finish this book. I recommend a stronger narrator for an subsequent books.

Different twist to the zombie story

The author is a good story teller, However he is awful a narration.
There is very limited range of voice's. His female charters are horrid.
If he continues to have books on audible then he should find a good narrator.

I'm not sure that I will finish this book.

Idk how much money you saved by reading it yourself but I promise it would have been money spent well to have a professional read it!

I enjoyed the listen but it was difficult for me in the beginning to get used to the way the narrator sounded.