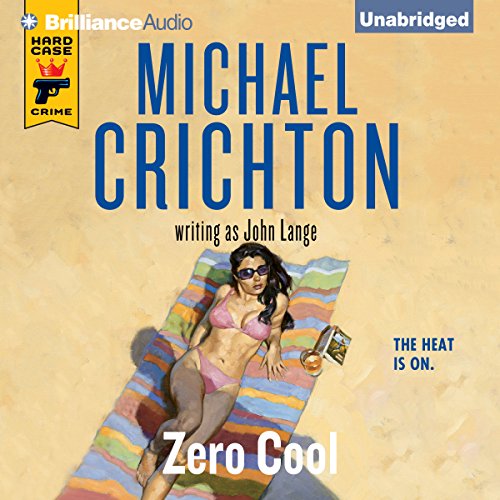 American radiologist Peter Ross just wanted a vacation. But when he meets the beautiful Angela Locke on a Spanish beach, he soon finds himself caught in a murderous crossfire between rival gangs seeking a precious artifact.

From Barcelona to the rain-swept streets of Paris, from the towers of the Alhambra to its darkest catacombs, Peter Ross is an ordinary man in desperate circumstances: racing to uncover a secret lost for centuries, before he becomes its next victim.

I listened to this because I'm a big Michael Crichton fan, plus I was up to Z in a self-imposed A-Z reading challenge! This is pretty typical of his John Lange gumshoe pulp-detective tales. There are also a smattering of medical elements to the story - I guess that's Crichton drawing on his medical background. Fairly standard fare, engaging enough but not great.

I love Michael Crichton and was a bit wary buying this book - after all, this book was written in the late 60's before he really started to develop his writing style / career. After the first hour I almost stopped because the plot was just too strange, but I was on a long training run and didn't have anything else to listen to. After the second hour it got really good and it was hard to stop. I'd recommend this book but there is something fishy (to me) about the claim that it was written in 1968. At the end of the book one of the characters mentions "taking the DVD out of the video recorder and placing it on the desk". Although I was born in 1970, I know for a fact that neither CD Roms of DVD's existed back then - so someone has done some additional writing / editing of Michael Crichton's original work.

The late 60s didnt have DVD...how can this be a camcorder with DVD discs? Very troublesome bit the bothers me beyond the entire story being good.

I LOVED the narrator! The story gets a little slow towards the end, and the characters are a bit eccentric, but this was a wonderfully entertaining tale!

Not my favorite Michalel Crichton book but definitely held my interest all the way through!

Michael Crichton at his most fun!

a really fun story, mystery, intrigue, and murder. A fine example of a pulp novel, coming from the point of view of a young Dr. instead of a spy or detective.
the part that most interested me was the end. Crichton mentions a video camera recording on DVD, however this book was written in the late 1960’s. did people even know about DVD technology back then? if so, not many! another example of his ridiculous knowledge and foresight, put to use even on a simple dime novel.

if you are missing this great author, dig-into the lange novels, they are mostly unknown and hard to find, but to a Crichton fan its like discovering new territory.

This is an early work by Michael Crighton written under his pseudonym John Lange. It’s an old-school pop style adventure story. Almost to shaggy dog story but very enjoyable. The pacing is brisk all the characters are somewhat cartoonish. But it works, it’s fun and you might get some elements of it but you probably won’t guess everything. This is one of his better early works.

These early Crichton novels aren't as well developed as his later books. This one also doesn't have much of a scientific background but was still an enjoyable read. There were a few improbable leaps but these could be glossed over.

This story is very weak, the dialogue is also very weak, and the simple writing has no complexity to help the story or dialogue; this would be a B movie with B actors...

This is noticeably Crichton’s early and simple work


3 of 4 people found this review helpful

Fans of mystery will likely enjoy this book. The story was good, not great. The narrator did a wonderful job.

Old School Crichton At His Finest

I've been a Crichton junkie ever since the early 90s when I was in 6th Grade (Thanks, Jurassic Park). When Michael Crichton passed away, I was devastated. Of course a few posthumous novels have been released, but I needed more. Then I discovered that his early work, written under the pen name John Lange, had been rereleased! There was much rejoicing.

"Zero Cool" is the second of the Lange-era novels I've read (er... listened to), and it didn't disappoint! At just under six hours, it's a quick story that keeps the action moving. There's hardly a dull moment, and Christopher Lane's narration is top notch. A few of the villains sound rather cartoony, but I loved that. It added to the 60s camp. I almost got an early James Bond vibe from this one. I highly recommend "Zero Cool" for fans of Michael Crichton or crime thrillers in general.