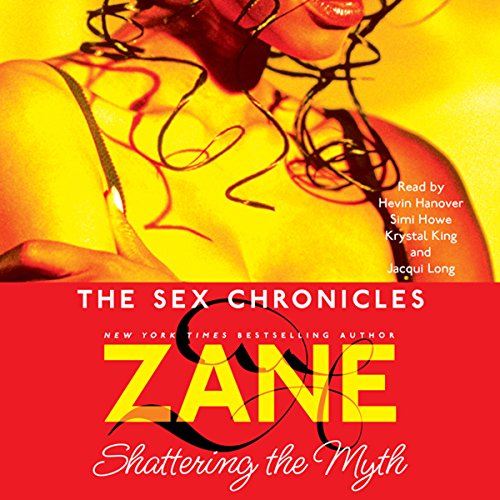 Like the series, Zane's Sex Chronicles is about empowerment and liberation - both in and out of the bedroom. Pleasurable from beginning to end, this anthology brings together hunger-inducing stories from the original best-selling editions of The Sex Chronicles: Shattering the Myth and Gettin' Buck Wild: Sex Chronicles II.

Zane's Sex Chronicles weaves together a compilation of bold characters and provocative stories of passion and intoxicating eroticism to seduce both men and women.

The book has been, and always will be phenomenal!

I would recommend to a friend for the story not the voice.

narration was boring ..couldn't get into it. bland ... it was not as exciting. need more enthusiasim from the narrator

Everything was just wrong. The repetition...ugh

I couldn't finish. The narration made me cringe. The repetition of the same nouns and adjectives was so annoying. Never again.

What did you love best about Zane's Sex Chronicles?

The story's are good the the voice of the readers put me to sleep.

What was one of the most memorable moments of Zane's Sex Chronicles?

After reading other books by Zane. I had hoped it would be similar. Not at all. This book was all sex not enough story. I guess I need a lil potatoes with my meat. If you want just sex, this is for you.

I can't finish this book...

this book was nothing more than repetition, and the narrator's were horrible. They sound mechanical as if I was listening to text to speech. Can somebody explain to me why everybody came 20 times in 2 minutes. Yes I'm being facetious but that's the way it sound. I guess I was looking for something more realistic and sexy and this wasn't. Shattering the myth... no it was completely mythical.

struggled to finish. couldn't delete from my device until I gave a rating to book

Everything I expected from Zane

I loved reading a the different short stories. it was real good to hear the one that I remember seeing on Zane's Sex Chronicles the coochie bandit. I don't know why I be listening to her at work tho I be torturing myself lol.

I have never read a book that made my imagination and craving wonder so bad. Im 26 and I’ve never had a true connection with my body . After reading this I feel in tune and have such a hunger now ! 😈 I am most def looking to enter my 30 because I know it’s going to be a whole different wave of excitement and evolvement ‼️‼️

Thank you so much Zane! This was amazing !!!!!! I will be reading ALL of your books !! So keep them cumin😈

zero wasn't an OPTIONAL I need a refund. do NOT WASTE YOUR CREDIT ON THIS BOOK