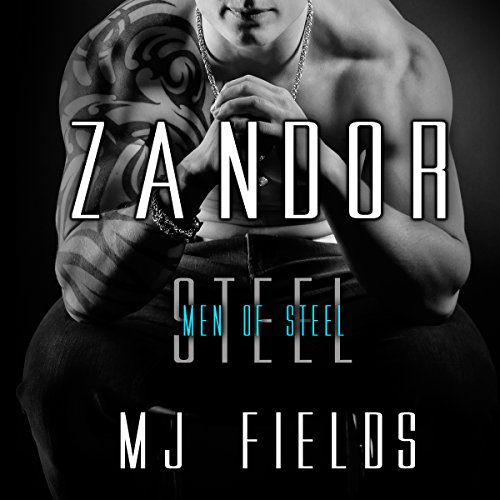 By: MJ Fields
Narrated by: Kai Kennicott,Wen Ross
Try for £0.00

Book 3 in the Men of Steel series.

Meet Zandor Steel. He's spent the past year in Italy ,acting out just about every sexual fantasy he could dream up. But it wasn't all fun and games. Zandor was there to oversee construction on a posh casino resort playground for the rich and famous.

But rumors of trouble with his brothers have him worried, and Zandor heads home to help out. It's the least he can do.

Jase and Cyrus had been Zandor's mentors. When it came to women, they taught him to avoid attachments and to know the difference between lust and love. So when word of at least one of his brothers being ready to settle down arrives, Zandor hopes he can talk some sense into him before it's too late.

Until he runs smack into resistance.

Southern belle Bekah George may just be the match Zandor has been looking for in the bedroom. She's neither intimidated by nor afraid of his preferences. But as he starts to let his guard down and consider the possibility of there being more to life than mind-blowing, noncommittal sex, Bekah reveals a side of herself Zandor doesn't want to see.

Was he right to avoid entanglements, or has he already fallen too hard to let her go?

Zandor is book three in the best-selling erotica series Men of Steel by M.J. Fields.

What listeners say about Zandor

I liked this story, didn't get the pulse racing and I thought there could have been more written about her family but apart from that it was a nice story x

I love MJ Fields, but this has been my least favorite of her books so far. I liked it enough to finish it and wanted to see how it ended, but I just didn’t feel as attached to these characters, especially Zandor, as I have to Fields’ other characters. I think the fact Bekah was Zandor’s employee (hired by him) and he wouldn’t take no for an answer pushed this too far into the realm of sexual harassment for me. I really struggled with that aspect. However, I know several people who love Zandor, so this might not be a problem for other readers.

The highlight for me was the part when Bekah and her brother attended the Steels’ Thanksgiving dinner, surprising both Bekah and Zandor. I really liked the Steels’ family dynamic and would love to see more of Bekah’s brother.

If you could sum up Zandor in three words, what would they be?

What other book might you compare Zandor to and why?

I couldn't compare it to any others I've read.

They did an awesome job bringing it to life andgiving the Characters a voice!

This book was so hot, it was hard to stop listening. Zandor's character was so real and believable, and Wen Ross's narration was off the charts!!!!! Becca's character touched a few nerves with the 'badass I can do it on my own' attitude, but it made for the best book in the series so far for me. Of course Kai Kennecott did a fabulous job narrating the female roles!!

I was wrong.. THIS IS MY FAVE

I thought Cyrus was my fave in the series but then Zander happened and I changed my mind... #Awesomesauce

Kia and Wen did yet another awesome
job in multiple characters.
Kai's southern was very charming,and her Bella was so sweat.
Wen did an amazing job depicting all the male voices in this book.

Hottest Steel yet! Couldn't put it down

What made the experience of listening to Zandor the most enjoyable?

Kai kennicott's voice is so yummy

What was one of the most memorable moments of Zandor?

Yes and I love them all. Wasn't super hip on Bekah's accent though

Couldn't stop laughing anytime the steel brothers were together!

If you could sum up Zandor in three words, what would they be?

I loved Zandor. He had no filter and always said what he felt.

Wow, the question would be what don't they bring? They are true storytellers. They are passionate about the story as they read and that is something that just cannot be duplicated when reading yourself.

I absolutely love the Steel brothers. Even though I started with book 3, the author gives you enough information so you aren't missing much frontage first two books. It was very easy to catch up. I also read Xavier and book one in the Ties of Steel series as well. Love MJ Field's writing and her books.

First I am totally going to gush about the performance. I think this is one of my most favorites by Wen and Kai. Not only is Wen's voice yummy and makes a girl feel all the feels, but Kai's accent or southern-ness in this book was awesome! I love it, I want to re-listen to it like right now.

Now the book, oh lordy bee its HOT, and funny and fresh.
I laughed out loud so hard with the scene with Bekah and her roommate, making the sounds as if Zandor was giving her the business.. OMG that was so funny I had tears.

Oh my god the way M.J. describes Zandor... Can I have one please?! Not only is he handsome but he is respectful and charming and swoon worthy and and and...
I might have a crush, could be on Wen's voice or it could be with a fictional character who is to say really. ;)

I love how Zandor antagonizes Bekah, it makes for a great read. Because she totally gives back what she gets.
Bekah, oh this girl she needs a man like Z in her life. She sure hasn't has it easy and she does let her dad bring her down and I understand why, thank god she found Zandor when she did.
She kind of reminds me of a shell hard on the outside but soft on the inside, esp around her father.

Zandor for me, I kind of feel like he was looking for a relationship even if he wasn't actively looking, he was ready so he was more open to it then Bekah was. Love how he tried to show Bekah that your past doesn't define you. You define you, and you can be the only one to chance that perception.

Some of my favorite lines

I’m Enjoying Listening, The Book By M.J. Fields! I Recommend To Listening To The Book, For Ur Self!🤗🤩🥰😘😙