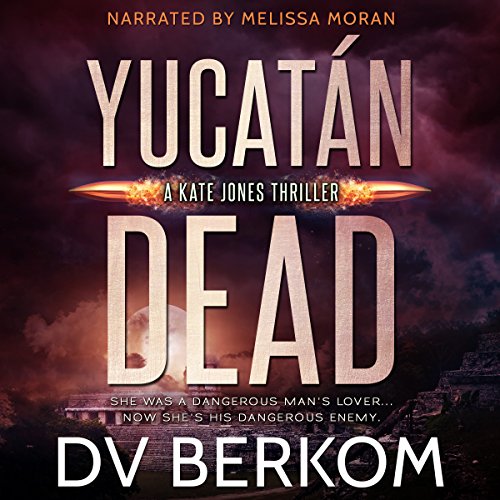 She was a dangerous man's lover - now she's his dangerous enemy.

For Kate Jones, being on the run from her former lover - the vicious leader of a Mexican drug cartel - was never going to be easy. But with a new identity, a new lover, and a new life in Arizona, she was beginning to believe she'd made it through the worst.

Then, in an act of twisted revenge, Kate is kidnapped and imprisoned by her deadly enemy, his intention to force her to pay back the money she stole before he kills her.

Fate intervenes and she finds herself working against the cartels deep in the Yucatan with a group of off-the-grid commandos.

From peaceful northern Arizona to the steamy jungles of Mexico, Kate Jones must decide for herself if she'll continue to run - or turn and fight the evil that pursues her.

"An unrelenting thriller of a tension-filled novel... Yucatan Dead is the stuff of which blockbuster movies are made... very highly recommended..." (Midwest Book Review)
" Yucatan Dead is a gripping thriller with a gutsy heroine and a tightly woven plot; it will no doubt please Berkom's current fans and gather more." (Pacific Book Review)
" Yucatan Dead ratchets up the tension from the start as Kate deals with hit women, warring Mexican drug cartels, and unofficial paramilitary organizations. Survival is never a given..." (Big Al's Books 'n Pals)

What listeners say about Yucatan Dead

Just gets better and better

This is the 3rd Kate Jones book I have listened too and in my opinion the book just get better and better. Even tho I enjoyed the first book, Kate was just running and only really stayed a live because of the help from strangers. In this book from Dv Berkom Kate is more kick ass and takes charge and fights back, which makes her a much more likeable person.As she is fighting for her life and for the friends she has made along the way.

Kate is kidnapped from her quiet life as a tour guild and finds herself back in Mexico. For someone who tried so hard to leave she manages to end up there a lot. It might be down to the fact that her drug Lord ex boyfriend lives there and everybody that holds a grudge against her too. The new Kate is in training to take down the drug cartel that has put out the hit on her life and end the nightmare of her life once and for all.

The narrator was a very good choice and her voice for Kate just screams yes I am being sarcastic and no I won't stand still so you can kill me.

“A fascinating and complex murder mystery that keeps readers involved and guessing till the exciting climax.”This is an extremely fast moving story; a page turner, if you will, and holds plenty of twists to keep the reader just a bit off balance right up until the end.

I love The Kate Jones series!!!

I really enjoyed this story! I loved the plot and it kept me engaged, but I felt that the narrating wasn't as good as it could have been. The narrator sounded a little like a robot, and her pronunciation of places in Mexico and of words in Spanish wasn't good. If there were just a couple words here and there with poor pronunciation, it would have been fine, but it was throughout the entire story. It will not be distracting to someone who doesn't speak Spanish or know the Spanish language, but to those who do, it is bothersome, especially when the character is familiar with the area. If I just read the book, rather than listening, I would give it 5 stars. DV Berkom is a talented writer and I plan to read more of her books in the near future! This book is part of a series, so I would like to continue reading more of it. Thank you!!

Would you listen to Yucatan Dead again? Why?

Yes! Because I loved it. When I listen to audio books, I'm often doing other things and miss nuances. So when I find a book like this one, with an unusual plot, intriguing characters, and a different writer's voice, I enjoy listening a second or third time to pick up on things I missed the first time.

What was one of the most memorable moments of Yucatan Dead?

So I don't include a spoiler, I'll just say, Kate's transformation. I also liked the author's descriptions, and Kate's quirky personality.

This is a pretty nonstop read, so there's a lot to choose from, but I enjoyed Kate's water escape. It was scary in more ways than one.

Against all odds, Kate Jones stands and fights.

I love the twists and turns the plot makes. The book is full of memorable characters that are fun to root for. It's also an unusual mix of humor and tension, ala, Pulp Fiction or Fargo though not as farcical.

Another step on the journey

The most recent book in the series takes Kate back to the beginning. Finally we get a bit of resolution on events in Mexico. Not everything, but plenty of things are brought to a head.

It is mostly from Kate's POV, which is interesting and engaging, but limited. I do like her spunky attitude. There are intriguing twists and turns, plus the added supernatural elements. She has become very endearing over the series. She definitely has bad luck haunting her.

I listened to the audiobook narrated by Melissa Moran, she does a terrific read. She does a great job with all the accents and voices. She has a very mater of fact tone that fits Kate to a "T". That is key because the whole narrative is from her POV. She keeps the voices consistent and distinct through the series. A great pace keeps things moving along at a steady clip. She has terrific energy in her read that adds to the action scenes. I will definitely be looking for more of her work.

I am eager to see what happens next in the series. I really hope we get to see more of her friends she has met along the way. Would love to see Henry, Sam, Harv and the other allies has has connected with.

Fun story. Really liked Quinn and the commandos and how Kate played off of them. Realistic setting. Like the narrator's voice throughout all the books. Where's the next one?