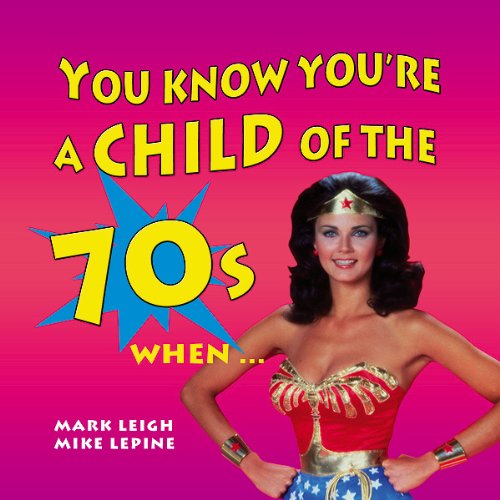 By: Mark Leigh,Mike Lepine
Narrated by: Joy Gelardi
Try for £0.00

Did you ride a chopper to school, buy your dad Old Spice for Christmas or believe that Jim could really fix it? If this sounds like you then hang up your disco ball, rake out the old Atari 2600 and tuck into a curly-wurly as you prepare to find out if you are a true child of the 70s in this flashback to the decade that style forgot.
©2006 Summersdale Publishers Ltd (P)2008 Summersdale Publishers Ltd
History
Show More Show Less

What listeners say about You Know You're a Child of the 70's When...

could have been much longer - and better

This nostalgia trip took me right back to my growing-up years (the only ones worth remembering) but I really should have checked the length, because it was hardly a Marathon (remember those?). This rapid, often breathless, shortie attempted to cover an entire era - or at least, what the author could remember of it - in less than 12 minutes, and ended up as a total mash-up as a result. I'm not complaining about the content (although Blakes 7 should have been in there somewhere), more of how the entire article ('cos that's what it was) was arranged. A series of one line observations, covering everything from David Cassidy to the Ford Capri - hit my ears at phenomenal speed, while I was left saying things like "Ronco! I remember them ... AND the K-Tel albums ..." while the narrator moved on to Raleigh Choppers, Evel Kneivel and the importance of wearing a mood ring (mine always stayed black.)

This was a fun tea break filler, but would have been so much better had
it been, say, a couple of hours longer, divided into topics (70's heartthrobs, 70's food and drink fads etc) and with each thing explained in more detail, especially the short-lived crazes such as Kernockers. As it was, It came over as a jumbled collection of author's reminiscences seemingly jotted down as she thought them up, and submitted "as seen."

Nonetheless, I AM a child of the 70's and have been left wanting more, much more.