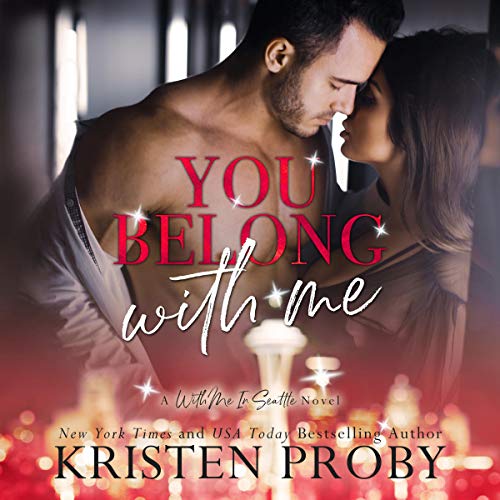 You Belong With Me

By: Kristen Proby
Narrated by: Sebastian York,Stacey Gembolski
Try for £0.00

From NYT best-selling author Kristen Proby comes an all new stand-alone novel in her beloved With Me In Seattle Series!

Elena Watkins is used to getting what she wants. She grew up the daughter of one of the most powerful mafia bosses on the west coast, an indulged, rich girl who got away with everything.

Except the love of her life.

Archer was the king of their high school. His charming grin swept her off her feet. Days after graduation, they ran away together and eloped. Elated to spend the rest of their lives together, Archer and Elena were on cloud nine.

He swore to keep them apart, even if it meant taking Archer’s life. Knowing what her father was capable of, Elena left Archer, and never looked back. The pain of leaving him would pale to the pain of losing him.

That’s what she’s told herself every day for 12 years. But now her father is dead, and Archer is back. Finally, they should be able to piece the broken pieces of their love back together.

But the mafia has a long memory.

What listeners say about You Belong With Me

So far I have loved all of the books in this series. The subjects went from bubbly and slightly dramatic to more intense and suspenseful. I Love it. However I am a little sadden by the less intense love making. Overall I've still enjoyed the books but nobody has quite gotten down like Luke and Nate...js

I absolutely loved this story! It had my attention from the very beginning! kept me guess and wanting to read more at ever moment!!

I love Sebastian York! His narration always makes a book stand up a little taller. The book was great with just enough mystery to set it apart from the rest of the series so far.

Excellent series, grabbed me from the first book

This series is amazing with such a group of people who come together as one big amazing family. Its nice to read about people that combined a variety of different personalities. Who learned to love one another.

This will be a relisten for sure!

A mixture of romance and suspense story

Wow, what can I say. It certainly started with a twist. This romantic/suspenseful story is about Archer Montgomery and Elena Watkins. Archer and Elena have been in love since high school and when Elena suddenly leaves, Archer's is heart broken. Elena never wanted to leave Archer, but she knew she needed to keep him safe. You see Elena is the daughter of the mafia boss.

Fast forward twelve years and Archer has found her, and he is determined to not let her go again.

You can read this book as a standalone, but I would recommend reading them in order. I also loved the narration by Sebastian York and Stacey Gembolski. They honestly were the perfect fit for Archer and Elena.

I love Kristen Proby books and always get the audible. Sebastian York and Stacey Gembolsji did a great job

Intriguing twist to the With Me world

I absolutely loved this book from the With Me series. I had already loved the story having read it on my Kindle when it was first published. As is typical for me I also eventually buy and listen to the audio version, usually 6 mos. to a year later. The audio version did not disappoint, I actually binged this and listened in one day. I already loved the story, but the performance was amazing. I have been a big fan of Sebastian York for what seems like eons.. Stacey Gembolski is new to me, but she was equally amazing. I highly recommend this audio book to any fans of the With Me series, or even if you are new to audio in general.. you wont be disappointed

I haven't read one of these books in so long and I am not sure what was stopping me. I love Kristen and this book was no different. Archer was completely devastated when Elena left him after they eloped at 18 and he had no idea why she left. It was young love, but real. She is the daughter of a well known mob boss and her life was in danger and she left to protect herself as well as Archer. Archer had really never moved on so when he found out why Elena left him and that she really did love him, he set out on a search to find her. He was unwavering in his love for this woman, no matter what happened to him. He really would go through anything to prove his love.
This book was darker than a lot of other of Kristen's books and I loved the darkness. Sign me up for mafia books and a little blood. I'm all in. This was a great quick read and it had a really amazing hero.

You Belong with Me

While You Belong with Me is a part of Kristen Proby's "With Me in Seattle" series, it really diverts in a different direction than the other books. It has a mafia connection, which really adds to the story. I loved the diversion this book took, and while I found some parts more disturbing, it really made the book what it was. Sebastian York and Stacey Gembolski did a fantastic job of bringing Archer and Elena to life!