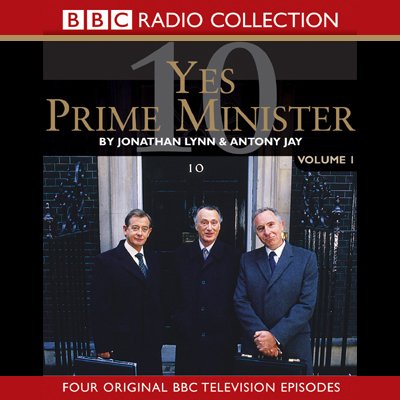 By: Antony Jay,Jonathan Lynn
Narrated by: full cast
Try for £0.00

The corridors of power will never be the same again. The Rt. Ho. James Hacker PC, MP, BSc (Econ) has made the ultimate political journey: to No. 10. And his newly appointed Cabinet Secretary Sir Humphrey Appleby is on hand to advise, encourage, and look after No. 1. Now this legendary partnership can steer a course through the twists, turns, and minefields of bureaucracy and government in four classic episodes from the highly successful BBC television series.

The four episodes include "The Smoke Screen", "The Ministerial Broadcast", "Official Secrets", and "A Conflict of Interest", in which Jim Hacker has reached No. 10, and Sir Humphrey Appleby puts a spanner in the mechanisms of government.

COMPULSIVE LISTENING ONCE READ IT CALLS YOU BACK TO LISTEN OVER AND OVER IN CASE YOU MISSED SOMETHING.IT IS ALWAYS FRESH AND TOTALLY ABSORBING.

A Masterpiece in Verbal Humour

An audio representation of a well-known TV show from years gone by can be a difficult thing to achieve successfully however on this occasion it has been achieved quite comfortably. Anyone with a love of what would now be considered classic BBC comedy programs from a time when comedy was real and cleverly done will love this audiobook based full of witticism and entertaining wordplays.

Great as always but the running order is wrong

I would like to note that the episode in Yes Prime Minister 1 and 2 are in the wrong order. This is evident in the overall story line but also when compared to the TV series. I don't know if this can be addressed by audible?

'Yes Minister' is as funny now as when it first came out. The actors timing and delivery are impeccable and no audio collection should be without them.

Comedy masterpiece - the characters and situations still bear relevance and are funny as ever. Great casting and acting also mean you can listen again and again even if you know the episode plots. I cherish them.

Perhaps the finest political comedy ever broadcast, the most tangled of plots and lines are unwound with seeming effortless grace by the writers and actors.

Top notch stuff that was admired by Margaret Thatcher, the real occupant of number 10 when it was run, a must listen for anyone interested in literate comedy.

Classic British Humour at its best.

I am assuming no one has written a review before because it really isn't necessary. Anyone thinking of buying this audio cd knows exactly what they are getting! Anyway, for the record :-As a fan of the original BBC TV series, I loved hearing it again,(and again and again)and although I bought it to keep me amused whilst doing various 'chores', in the end I had to stop the chores and just sit and listen, because it is just so damn funny. The images of Bernard, the Prime Minister and Sir Humphrey so clear as I listen to their banter. Both British and Classic, Humour it certainly is, and comes across almost as good on audio as watching the original version on TV. Marvellous stuff, but you knew that already !

I have never seen the TV series and was not sure if I could enjoy this. I was wrong and I'm glad of it. I created the characters and scenery for myself as I cooked, cleaned and worked around the house. I love this and look forward to the other volumes, spring cleaning is fast approaching.